‘Donor fatigue’ among the threats to Iraqi Christian refugees in Jordan 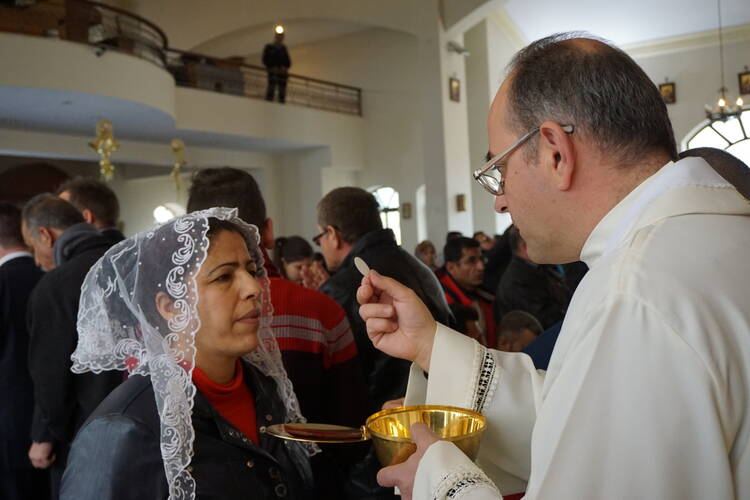 Mass for Iraqi Christian refugees at Our Lady of Peace Center on the outskirts of the Jordanian capital, Amman, in January 2016. (CNS photo/Dale Gavlak)

AMMAN—Although the war against the Islamic State is drawing to a close, thousands of Christian families from Iraq remain displaced in neighboring Jordan, where the Christian community is struggling through “embassy and donor fatigue” to provide basic pastoral and material services to Iraqi refugees.

The Catholic Near East Welfare Association, a papal agency, provides food aid and sponsors educational programs for these refugees in Amman, the capital of Jordan. In a country already coping with millions of Syrian and Palestinian refugees, however, many Iraqi Christians wish to permanently resettle elsewhere.

Iraqi Christians seeking refuge face unique challenges in Jordan. The government does not allow Iraqi refugees, unlike Syrian refugees, to work legally. Additionally, most Christians in Iraq are Assyrian-Chaldean, an ethnic minority that speaks Aramaic rather than the Arabic spoken in Jordan.

C.N.E.W.A. reports that it is currently providing food vouchers to 1,754 families with 6,481 individuals. It has a wait list of 297 more families comprised of 956 individuals. C.N.E.W.A. officials say that more families call every week asking to be placed on the wait list, but the organization does not have the funds to accommodate more or to sponsor a census of the total number of Iraqi Christians in Jordan.

Although many Iraqi Christians have resettled in Europe, North America and Australia, refugee resettlement in the United States has fallen to record lows under the Trump administration.

Few of the refugees are interested in returning to Iraq. “Return to what?” asks one. He says that “Iraq is a Frankenstein, not a state” because of the persistent ethnic and sectarian divisions.

Youth leader Danny George has been in Jordan since 2014. He is from the Iraqi province of Nineveh, the historic Chaldean-Assyrian homeland. Mr. George complains that it is now "impossible" to go to the United States.

But few of the refugees are interested in returning to Iraq. “Return to what?” asks Remel Somo, another Chaldean-Assyrian refugee. He says that “Iraq is a Frankenstein, not a state” because of the persistent ethnic and sectarian divisions.

The 24-year-old lost two uncles and his home in Baghdad to al-Qaeda.

Hasnaa Babaka says that she has "hundreds" of relatives in Australia and the United States, "but if we go back [to Nineveh], there is no one left."

The memory of persecution in Iraq is still raw. Ms. Babaka remembers the exact date she was forced to leave: March 29, 2016.

Iraq remains dangerous for returnees. Mr. Somo notes latent popular support for ISIS and poor treatment of Assyrian-Chaldeans by the Kurdish regional government as two issues of concern. He says that Chaldean-Assyrian seats in parliament were unfairly taken by non-Christian parties in May’s election.

He notes that Chaldean Christians in the province have been under threat long before ISIS invaded Nineveh in 2003, citing the 1915 genocide by Ottoman soldiers and another notorious massacre of Assyrian Christians in 1933 at Simele at the conclusion of the British Mandate of Mesopotamia.

Though some refugees depart, their numbers are quickly matched by new Iraqi-Christian arrivals in Jordan.

“ISIS was only an episode,” he warns, “not the whole series.”

Ra'ed Bahou, director of C.N.E.W.A. for Jordan and Iraq, says that foreign support is slower to come when there is no immediate crisis. This “embassy and donor fatigue” is especially hard on C.N.E.W.A., which relies primarily on American and European donors.

Though some refugees depart, their numbers are quickly matched by new Iraqi-Christian arrivals in Jordan, according to Mr. Bahou. As services for displaced persons in Iraq shut down as the war against ISIS winds down, many Christians have decided to try for refugee status and the possibility of resettlement abroad by crossing into Jordan.

Some have moved in with relatives in the Amman neighborhood of Hashemi, which is nicknamed “Little Qaraqosh” after the largely Christian city in Nineveh where many once lived. But the years-long wait for resettlement quickly depletes families’ savings.

All young children registered with C.N.E.W.A. are eligible to receive free milk, whether or not their families officially receive food vouchers. The organization also provides refugees with health care, blankets and heaters and other miscellaneous needs. While these services are short-term life-preservers, they cannot work as a reliable support to refugee families in the long run.

The amount varies depending on family size and conditions, but for one family, a food voucher worth 40 dinars, or about $55, is supposed to last one month. Many families must work illegally in order to make ends meet.

Mr. Bahou says that while the Jordanian government does not harass Iraqis who work under the table, he wishes that Iraqis could have a “legal pathway” to work, citing stories of Syrian refugees who “excelled” when given the opportunity.

In addition to immediate material aid, C.N.E.W.A. also provides for the psychological and spiritual needs of the refugees.The C.N.E.W.A. community center also offers a variety of classes aimed at refugees, including English lessons. Adults practice speaking and writing with Americans and Canadians who volunteer at the library, while their children mingle and play board games surrounded by shelves of English and Arabic books.

Some refugees come from as far as Zarqa, a city an hour east of Amman, just for the chance to use these services.

Every Monday and Wednesday afternoon, librarians teach the children their ABCs in English. It is difficult because many of the students speak Aramaic rather than Arabic at home. Lessons move slowly and deliberately, as the Arabic-speaking children translate for their friends. But because many refugees plan to resettle in English-speaking nations, the classes are crucial in preparing for the future, C.N.E.W.A. officials say.

In the picturesque hilltop neighborhood of Marka, the Theodor Schneller School for at-risk youth hosts a summer camp for Iraqi refugees. Franciscan Missionary Sisters and graduates of C.N.E.W.A.’s lay leader formation program teach Christian refugee children about the role of the Virgin, while also leading hymns, sports and handicrafts. The children and counsellors are housed at the school; at night, the children put on theatrical performances and staff lead them in saying the rosary.

C.N.E.W.A. and the Franciscans have been running this program since the U.S. invasion of Iraq in 2003.

“In education, I can serve God and find myself,” says Raed Sonaa, a Jordanian cantor and youth leader at the camp. “Iraq is a different culture for me, so [teaching] is a new experience.”

But the counsellors who are refugees face difficulties themselves. Ms. Babaka complains that she lacks an income to pay the 350 dinar ($505) monthly rent for the rest of the year.

Mr. Bahou says that “the best thing” C.N.E.W.A. does for the refugees is to put them in contact with pastoral services and connect them to the Iraqi diaspora community.

Supervised by the Chaldean Catholic Church, Mr. Somo teaches an Aramaic class, as many Chaldean-Assyrians were never taught to read or write in their mother tongue.

“Arab nationalism and Kurdish nationalism worked hard to erase our identity,” he says. “Aramaic is like my eyes or my tongue. It’s a part of me. I’m afraid of it vanishing.”

He has taught 26 people through two beginner literacy classes and “between 15 and 25” in his intermediate Aramaic class.

Although Mr. Somo cares deeply about the Chaldean-Assyrian cause in Iraq, he sees his future in a Christian-majority country; some of his relatives live in Detroit. Fundamentally Mr. Somo is tired of being a refugee in Jordan or a “second class” citizen in Iraq.

“I lost two years in Jordan,” he complains. “I teach some classes and do some activism for the community, but I cannot run anything official because that is crossing a line for a refugee.” 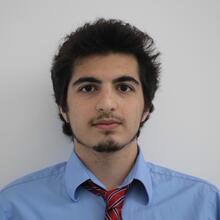 Matthew Petti, a senior at Columbia University in New York, is studying Arabic in Amman, Jordan, through a Foreign Language Area Studies fellowship from the U.S. Department of Education.

Thank you for the information. Is there a way to donate to help?

CNEWA is a registered 501(c)(3) in the US. You can donate online at www.cnewa.org

Last April, we hosted a small gathering to welcome Archbishop Bashar Warda of Erbil, Iraq, who was in the US raising awareness for the plight of Iraqi Christians. We heard some sad stories, but also heard very hopeful news from him, such as his efforts to build a university and a hospital, both of which he hopes will inspire some who left to return to their homeland. A young Iraqi couple, here in Dallas to get a masters degree with the hope of returning to teach at the new university in Erbil, also attended. It was very touching to hear them pray the Our Father in Aramaic.