Sudanese bishop: Despite being many tribes, people are, first of all, Nuba 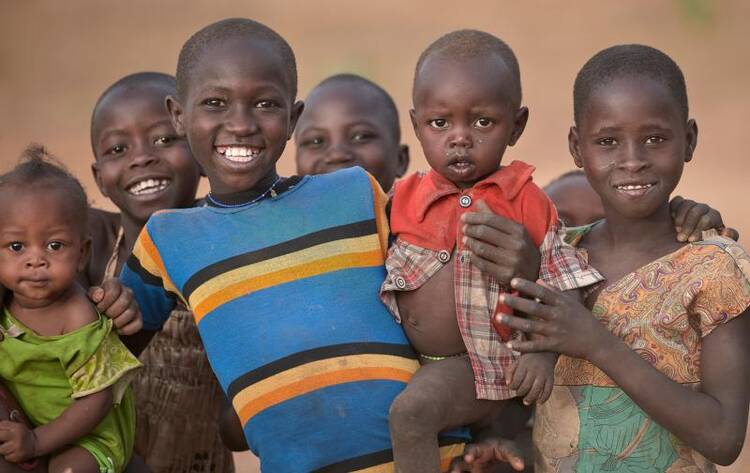 NUBA MOUNTAINS, Sudan (CNS) -- After watching for years as newly independent South Sudan has succumbed to civil war fought largely along ethnic lines, displacing one-third of the population, church leaders in the Nuba Mountains of Sudan are working hard to ensure that their small enclave of liberated territory will not go the way of its neighbors to the south.

"But the Nuba are different. They have one characteristic which can be an example for many African nations today. It is their unity in diversity. Despite being many tribes, they are, first of all, Nuba. That's a gift that God has given them."

Father Zacharia Osman, the parish priest in the Nuba village of Lugi, said the Catholic Church is actively working to keep tribalism at bay.

"We are encouraging our government not to follow the example of South Sudan, because, someday, when peace finally comes, people will want to fight for power and resources," he said.

"Our mission as priests is to encourage our people not to be like those leaders in South Sudan who create tribalism among their people. We are very prudent about this, because if any country has tribalism or segregation, that country will not prosper."

"Our mission as priests is to encourage our people not to be like those leaders in South Sudan who create tribalism among their people. We are very prudent about this, because if any country has tribalism or segregation, that country will not prosper."

Father Osman, who was born in the village he now serves as a priest, told Catholic News Service the character of the Nuba undercuts the temptations of tribalism.

"We are very generous people. We welcome everybody. Wherever you come, we welcome you. Our people may look very poor, but we work together. We have a mutual understanding. We don't have a desire to create hatred among ourselves. It's the nature given to us by God."

Dr. Tom Catena, a U.S. physician at a Catholic hospital in Gidel, said people in the Nuba Mountains are concerned about events in the neighboring Blue Nile region, another rebel-held area of Sudan where tribal conflicts provoked a bloody battle for political control of the insurgent movement.

"This isn't much of an issue yet for the Nuba, but we're worried this evil will creep into society here," said Catena, a lay missionary for the U.S.-based Catholic Medical Mission Board.

"The tinder is always there. If you're from one tribe and you see some other guy get promoted over you, you can't accept that it's because he's more competent. So you claim it's because of his tribe. It's a cheap way to start conflict and, once it's there, it becomes ingrained."

Catena said the Islamist government of Sudan, based in Khartoum, would love to encourage ethnic conflicts in the Nuba Mountains.

"Khartoum is a master at manipulating people. I'm sure they have spies here fomenting problems. When conflicts do emerge, I always wonder if some agent from Khartoum is here stirring the pot," he said.

The Nuba Mountains are home to nine distinct ethnic groups, which include 86 tribes speaking more than 40 languages, according to local authorities.

"Our mission is to evangelize, educate, entertain and inform people. In all that work, we strive to build reconciliation by teaching people how to live at peace with one another. Most people in the Nuba Mountains haven't been to school, because the Khartoum government never wanted them to be educated. So the radio is here to help them learn," Makki said.

"We use the word Nuba as if it were one big tribe, and we encourage the people to do the same, even though we're many tribes with many languages," Makki added.

The station's news editor, Kocholo Latmer, said the station uses Arabic and English, the common languages that unite the region, along with Tira and Otoro, the two most prominent local languages. Yet recent budget cuts -- the station's staff of 14 was halved last year -- have made it harder to be inclusive.

"Many people come to us and say they want to hear their language on the radio. With the resources we have, we can only broadcast a few hours a day, so there's not enough time or personnel to do more," he said. "But we at least share some of their songs, which helps them feel proud and know that the radio station belongs to each of them, just as the Nuba Mountains belong to each of them, not just to one distinct tribe."