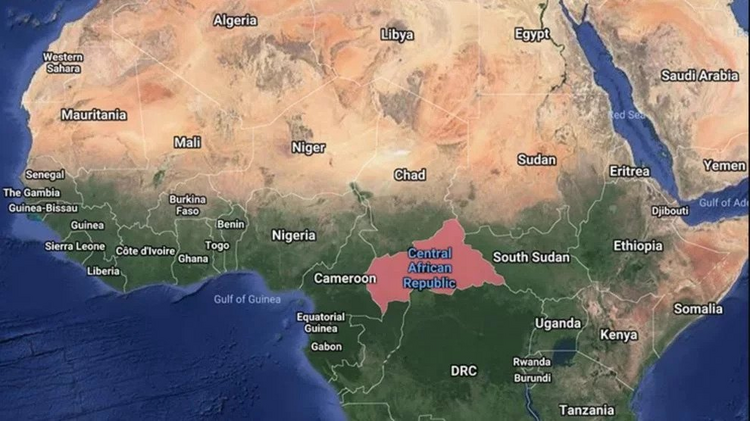 NAIROBI, Kenya (RNS) — Following the recent killings of priests in the Central African Republic, Catholic officials worry that clergy are being targeted by armed groups for their peacemaking efforts.

On June 29, Firmin Gbagoua, vicar general of the Bambari Diocese, which covers much of the Central African Republic, was killed by a suspected Muslim rebel group. Gbagoua, who served as the regional director of Caritas, an international Catholic relief group, was the sixth Catholic priest to be killed in the conflict that has pitted pro-Christian militias, known as anti-Balaka, against Muslim rebels, known as ex-Seleka.

Gbagoua’s death comes a month after Abbot Albert Tougoumale-Baba was shot dead in an attack in a cathedral in the capital of Bangui in May. The Rev. Joseph Désiré Angbabata was killed in a similar attack in the Bambari Diocese in March.

The Rev. Firmin Gbagoua was murdered in the Central African Republic on June 29, 2018. Photo via Facebook

“The attacks can be seen as an attempt to silence the church for its strong opposition to the violence and its work on peace,” Archbishop Nestor Désiré Nongo-Aziagbia, vice president of the CAR’s Catholic bishops’ conference, told Religion News Service.

The Editors: Anyone who recognizes the humanity of the unborn should support the nomination of Judge Kavanaugh.
The Editors

How getting older—and feeling invisible—is preparing me for the kingdom of God
Paul F. Morrissey

The majority-Christian country descended into conflict in 2013, when Seleka, a coalition of Muslim rebel groups, overthrew President Francois Bozize and installed their leader, Michel Djotodia, who declared himself president. The rebel coalition rampaged across the country, burning villages and attacking and looting churches. As president until 2014, Djotodia attempted to dissolve Seleka, but splinter groups continue fighting as ex-Seleka.

Djotodia’s rise to power ignited counterattacks by anti-Balaka, a mainly Christian and animist group, also called “anti-machete,” so named because Seleka fighters often use machetes in attacks. By the time Djotodia resigned in 2014, anti-Balaka had emptied thousands of Muslims from the southern part of the country. Thousands more fled to neighboring Chad and Cameroon, while others camped in churches under the care of priests and pastors.

Fighters on both sides point to religious belief as the reason for the conflict, but many of the country’s faith leaders have stated that it is a political and economic conflict while steering both sides toward peace. Cardinal Dieudonne Nzapalainga and Imam Kobine Layama of Bangui have appeared together in conflict zones as a symbol of unity.

Fighters on both sides point to religious belief as the reason for the conflict, but many of the country’s faith leaders have stated that it is a political and economic conflict while steering both sides toward peace.

“The Catholic Church has stood for the truth, denouncing all the evil plots and plans to destabilize the country and continue the illegal exploitation (of mineral resources),” said Nongo-Aziagbia. “Everything points to these deep reasons (for the) persecution.”

Scholars say that faith leaders on both sides are being attacked since they are perceived as interfering with mining natural resources or supporting the other side when they preach peace.

“It is an economic and political conflict. Some people are benefiting and when the clerics push for peace, they are seen as interfering with the business,” said Abdallah Kheir, a scholar of African studies and Islamic studies at Kenyatta University in Nairobi.

Three years ago, a transitional council adopted a new constitution aimed in part to quell violence. But since then, armed groups that splintered from Seleka and anti-Balaka continue to carry out assassinations, other killings and rapes, according to human rights groups.

“The situation is appalling. Vigorous efforts should be employed to end the crisis,” said Sheikh Hamid Byamugenzi, deputy director of the Islamic University in Uganda. “My fear is the tragedy may lead us into deep trouble like the Rwanda genocide. … It may spill over to other regions.”

Francis Kuria Kagema, secretary general of the African Council of Religious Leaders, urged the fighting groups to pursue a new beginning since the violence has caused suffering among innocent citizens.

“They should rethink the new constitution, which was approved in 2015. I think that offers the country a chance for a new beginning,” said Kagema, who noted that most of the country’s minority Muslim population was forced out during the conflict.

According to Kagema, there should be more grass-roots peace efforts, and the Muslims who were forced out should be allowed to return.

“They should be helped and supported to resettle,” said Kagema.