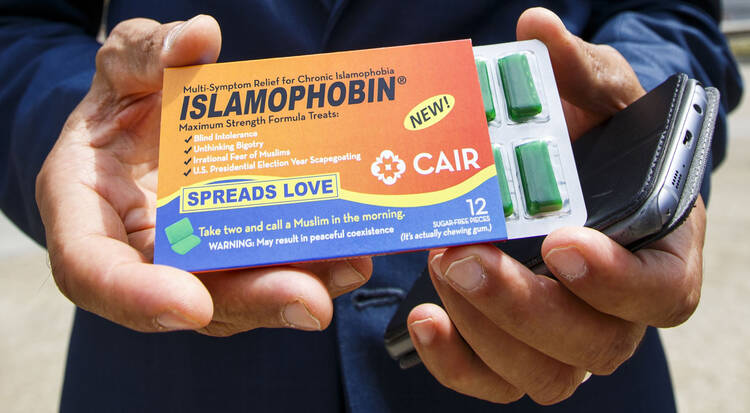 A man near the Republican National Convention in Cleveland in July 2016 holds a pack of chewing gum called '"Islamophobin." The packaging attempts to bring attention to the issue of anti-Muslim attitudes in the United States. (CNS photo/Justin Lane, EPA)

(RNS) — It may be a law of nature: President Trump tweets something about Islam. Anti-Muslim hate crimes follow.

That’s according to a working paper by University of Warwick researchers Karsten Müller and Carlo Schwarz.

Their conclusions correspond with anecdotal reports collected by Muslim civil rights and advocacy groups, too.

Müller and Schwarz examined publicly accessible data such as the weekly number of anti-Muslim hate crimes recorded by the FBI in their paper, “Making America Hate Again? Twitter and Hate Crime Under Trump.”

The researchers were curious whether what happens online motivates action offline. While people seemed to agree hateful rhetoric on social media was dangerous, Schwarz said, they were “surprised nobody had ever looked at it.”

But, Schwarz added, Trump shouldn’t get all the blame.

“Our idea is not basically that it’s just Donald Trump’s individual tweets that are causing this entire effect,” he said. “His tweets are widely shared, the news are discussing it and a lot of people are just exposed to this kind of rhetoric. This is just spreading through social media and in particular Twitter.”

Social media’s ability to deluge users with negative sentiments may push people “who were already on the edge” to commit hate crimes, according to the researcher.

And it’s happening beyond the United States.

Müller and Schwarz, who are German, previously wrote a study looking at Facebook posts by right-wing political party Alternative for Germany (AfD) and how it may be associated with anti-refugee crime in Germany.

The “social media effect” is the same, and it vanished with internet outages in certain areas or Facebook outages that impacted the whole country, according to Schwarz.

Despite their research, Schwarz said he and his colleague were “torn” about possible solutions. Leaving it up to private companies like Facebook to determine what is “acceptable” is worrying, as are laws like Germany’s that fine networks up to $60 million for each post they decline to remove that is deemed hate speech.

Turning off the internet may help, he joked, but that’s not realistic.

Muslim Advocates published a 2014 report titled “Click Here to End Hate” looking at ways to combat anti-Muslim bigotry online. Even as the authors were writing it, Ahussain said, the organization knew it quickly would become outdated as social media platforms and their use evolved.

But, she said, they hoped it would encourage people to report content they thought violated those platforms’ terms of service and, in calling for greater accountability, demonstrate why it’s important. The group has become more diligent about holding accountable platforms such as Twitter, Facebook and YouTube, too, she said.

“It’s not just about the president,” Ahussain said. “We don’t know that the president will ever be suspended from any of these platforms, but what the conversation should be about is how do we monitor and hold accountable the people who are sharing this type of hatred and bigotry and encouraging violence on the platform?”

After communicating with Twitter about far-right group Britain First’s use of the Twitter platform, she said, Muslim Advocates was notified the platform had suspended the accounts of leaders Paul Golding and Jayda Fransen. Trump had infamously retweeted inflammatory anti-Muslim videos posted by Fransen.

In May, Facebook also agreed to a civil rights audit that Muslim Advocates had asked for, Ahussain said.

“They are under a lot of pressure right now, and it seems as the pressure mounts, they’re more likely to try to come up with strategies that will be responsive to those concerns,” she said, “but I think we have a long way to go.”

Why is it that there are no comments about this article that was posted several days ago? Maybe the answer is right there in the title which suggests that they were looking for a link, No matter how weak.