Alienation (Trump-ism?) is Now a Permanent Condition in America 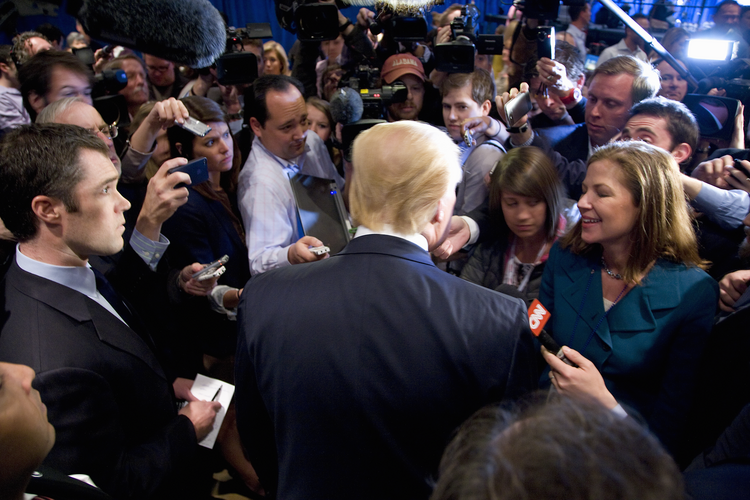 New York Times columnist David Brooks writes that Donald Trump’s rise in the Republican-primary polls is symptomatic of “a time of economic anxiety and political alienation.” Citing polls that show only a small minority of Americans feel their views are represented in Washington and think the nation is on the right track, Brooks concludes, “Never before have we experienced a moment with so much public alienation and so much private, assertive and fragile self-esteem. Trump is the perfect confluence of these trends. He won’t be president, but he’s not an aberration. He is deeply rooted in the currents of our time.”

Trump may reflect alienation, but if so, we’d better get used to more candidates like him. The condition that Brooks describes is not temporary. And it’s not necessarily a cause for anguish. The United States has become so big and diverse that we may never return to a broad consensus on what the “right track” is, never mind whether we’re on it. For millions, the election of Barack Obama as the first black president in 2008 was an affirmation of America’s potential for greatness. For millions of others, it was an unsettling break with the conventions of American government. Equal voting rights was one thing, but a president who was rejected by a majority of white voters? The loss of political privilege can indeed be profoundly alienating.

Last fall, when Trump was just a reality-TV host and Jeb Bush was still deciding whether to run for president and save the Republican Party, Brooks wrote in his column, “We are living in an amazingly fortunate time. But we also happen to be living during a leadership crisis, and a time when few people have faith in elites to govern from the top. We live in a vibrant society that is not being led.” His prescription: “We need to get over the childish notion that we don’t need a responsible leadership class, that power can be wielded directly by the people.” (See my earlier post, “David Brooks Reminds Us of the Ruling Class.”)

You can see why Trump is giving Brooks agita. The real-estate mogul does not fit the description of “a responsible leadership class” (which is different than classy leadership). Neither does Democratic candidate Bernie Sanders, whom Brooks calls a “bumper-car politician…comfortable with class conflict.”

But what constitutes membership in a responsible governing elite in 2015? Is it the ability to respond to the #BlackLivesMatter movement and reduce police misconduct and mass incarceration? Or is it more important to keep the streets quiet and free of protest marches that might disturb people on their way to work at the New York Times?

We never really had a broad consensus on how to direct political and economic life in America. We had an expectation that white Christian (for a long time, that meant “Protestant”) men of good stock would serve as leaders, and the rest of America would be content with being “heard” without actually having a hand in running things. The civil rights movements for black Americans, women, gays and lesbians, and the physically disabled (among other groups) were born of a sense of alienation, and their successes inevitably fueled alienation among previously privileged groups. The election of Obama was a point of no return, as we have seen from the angry and bewildered reactions to his taking office—including the perpetuation of the myth, embraced by Donald Trump, that the president wasn’t born in the United States.

James K. Polk isn't coming back to save us

David Brooks often seems puzzled that all of America doesn’t share his unease with something. Over the past few years, a lot of people have voiced astonishment that their outrage about a particular issue hasn’t become a broad consensus to act. Millions of Americans were stunned that the Affordable Care Act wasn’t repealed after its rocky first months of implementation, and millions of others are stunned that Republicans still want to repeal it years later. Every time there’s a mass shooting, millions are gobsmacked that Congress won’t pass new gun control measures. Some have expressed shock that the release of videos showing Planned Parenthood representatives causally discussing the sale of fetal tissue resulting from abortions hasn’t caused a huge shift in public opinion against the organization. There may have been a time when the elites celebrated by Brooks could force such a change, but the United States has become too diverse, and its people’s sources of information too diffuse, for this to happen in 2015. And so just about everyone feels alienation from the political process to some extent.

Jeb Bush recently cited James K. Polk as one of his most admired U.S. presidents, speaking approvingly of his expansionist policy that brought Texas (and, eventually, nine other Western states) into the union. A long time ago, Polk personified a real consensus in American goals—that is, to keep pushing westward and make the United States bigger and bigger, an attitude that led to our 20th-century drive to move further and further away from cities and into bigger and bigger houses. Getting into wars in order to take more land was a pretty effective way to tamp down feelings of alienation among Americans (as long as we were winning), but Polk’s can-do attitude isn’t a realistic remedy for our current ennui. (Where to settle our growing population has instead become another fault line in American politics.)

Maybe Bush was unconsciously thinking of Trump and "The Apprentice" when he daydreamed about Polk and his muscular presidency. Brooks is surely correct that Trump is tapping into widespread anxiety, especially among voters still trying to process the reality of Barack Obama as president. In the Atlantic, political scientist Norm Ornstein links the “Trump bump” to years of “angry, anti-establishment, anti-leadership populism” that has been encouraged by the Republican Party and conservative media. “The angry populism,” Ornstein writes, “has only grown with conservative rank and file incited to expect the repeal of Obamacare and an Obama capitulation on debt-ceiling showdowns and government shutdowns, ending repeatedly in disappointment.”

That’s alienation, all right. Trump isn’t going to get rid of it, but neither is a traditional, good-looking leader from a ruling-class family who can calm the waters and tamp down political debate. The “currents of our time,” as Brooks puts it, can no longer be diverted into a single, placid creek.

Robert David Sullivan
RobertDSullivan
Show Comments (
2
)
Comments are automatically closed two weeks after an article's initial publication. See our comments policy for more.
Joshua DeCuir
5 years 10 months ago
I get that David Brooks is an easy target, particularly for a liberal like Mr. Sullivan, but I'd like to know how Mr. Sullivan thinks Brooks' expectations for a leadership class differ in any substantive manner from the expectations Pres. Obama had of himself during his first campaign? Remember - he claimed that his election would accomplish all manner of wonders, no less than the receding of the rising oceans, as well as an end to the polarized politics both he & Brooks lament? And remember also, David Brooks is the Obama White House's favorite (conservative?) columnist. For that matter, perhaps in a future column, Mr. Sullivan will no doubt explain how Mrs. Clinton's election is in any way different than hoping that "a traditional, good-looking leader from a ruling-class family who can calm the waters and tamp down political debate"?
Robert O'Connell
5 years 10 months ago
Given the return to the "elites" that David Brooks appears to see as populating "a responsible leadership class" which he, in turn, idealizes, I want to say a word about Presidents Truman, Eisenhower, Johnson, Nixon, Ford, Carter, Reagan, Clinton, and Obama: they were not "elites" when young. The beauty of America is that these people were elected, not bred or otherwise designated the "leadership class" or preordained as members of any other "elite" group.