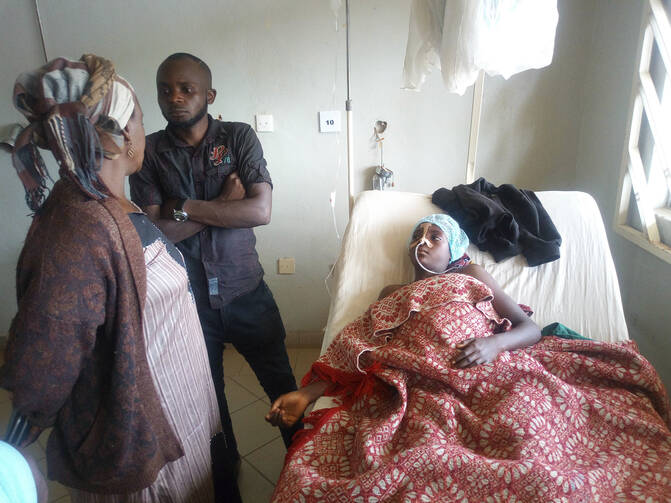 A child receives treatment at the Jos University teaching hospital in Jos, Nigeria, on June 25, 2018, after clashes in central Nigeria between mostly Muslim herders and Christian farmers. Dramatic footage from Jos showed angry people waving machetes and sticks and shouting at passing security forces as they weaved around overturned and burning vehicles. (AP Photo)

LAGOS, Nigeria (CNS) -- Nigeria's Catholic bishops criticized the president's lack of action against ethnic Fulani herdsmen who attack farmers and linked his inaction to his religion.

"It can no longer be regarded as mere coincidence that the suspected perpetrators of these heinous crimes are of the same religion as all those who control the security apparatus of our country, including the president himself," the bishops said.

"If the president cannot keep our country safe, then he automatically loses the trust of the citizens," the bishops' conference said in a July 2 statement signed in the capital, Abuja, by its president, Archbishop Augustine Obiora Akubeze of Benin City, and general secretary, Bishop Camillus Umoh of Ikot Ekpene.

President Muhammadu Buhari "should no longer continue to preside over the killing fields and mass graveyard that our country has become," they said.

Buhari, a Muslim and a former military ruler, won office in a democratic transfer of power in 2015 and plans to seek a second term in elections scheduled for February.

Communal violence is widely attributed to a decades-old cycle of conflict between predominantly Christian farmers and Muslim semi-nomadic herders, partly due to competition for arable land.

"If the president cannot keep our country safe, then he automatically loses the trust of the citizens," the bishops' conference said.

More than 200 people were killed in late June in violence in central Nigeria's Plateau state. There has been a spike in communal violence in Africa's most populous country, with hundreds of people being killed since the start of the year.

In the wake of more deaths in an upsurge in communal violence in Nigeria, the country's bishops said the government has lost the people's trust.

"Words are no longer enough for the president and his service chiefs to convince the rest of the citizens that these killings are not part of a larger religious project," the bishops said.

The country "is likely to witness another mass burial of innocent Nigerians as a result of the serial murderous activities of a group who clearly seems to be above the law of the country and who, by their actions and words, have insisted that human lives are worth less than the lives of cattle," they said.

Nineteen people, including two priests, were buried in May in Ayati. Father Joseph Gor, Father Felix Tyolaha and 17 parishioners were killed during the celebration of Mass at St. Ignatius Catholic Church, Ayar Mbalom, in Benue state.

"This shameful inversion of values portrays our country as barbaric and our society as brutish," the bishops said.

They called on the police to make swift arrests of perpetrators of the Plateau state attacks, noting that law enforcement happens fast when herders are killed.

In a letter to Buhari, Cardinal Anthony Olubunmi Okogie, retired archbishop of Lagos, said that every life is precious, irrespective of ethnic, regional or religious affiliation, and that citizens look to government to protect them.

"But, here in Nigeria, the blood of the innocent flows like water, despite Nigerians' desire and demand that government secure their lives and property," he said.

"Where were you, Mr. President, while innocent lives were being wasted in Plateau state? Where were your service chiefs when babies were being ripped out of their mothers' wombs by men who claimed to do so because of their cows?" he asked.