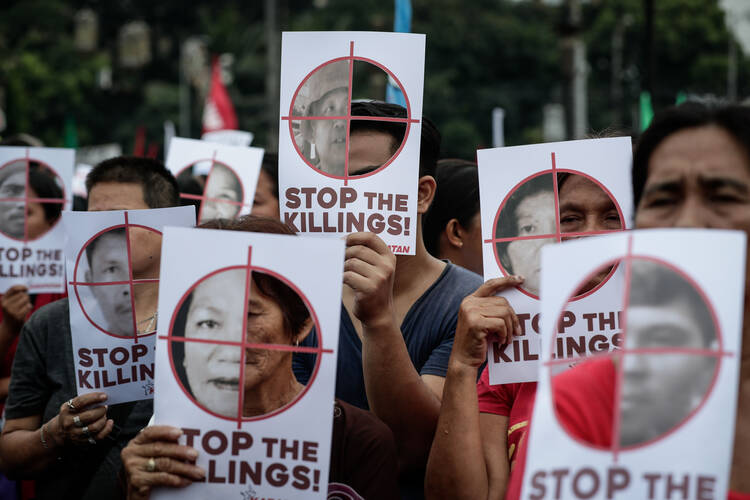 April has proved a terrifically cruel month for Catholics around the world, particularly Catholic priests. Scores have died in a series of attacks and assassinations in Mexico, the Philippines and Nigeria. Catholics at prayer during Mass have been targeted in a number of attacks.

Four members of a Catholic family were killed in a militant attack in southern Pakistan on April 2, and in the Democratic Republic of Congo a priest was assassinated shortly after celebrating Mass on April 8. It was the latest attack on the Catholic Church in Congo, where the church has been sponsoring peaceful demonstrations to protest President Joseph Kabila's refusal to leave power.

Sadly, May started off with yet another church attack that raises the specter of a potentially devastating round of sectarian reprisals in Bangui, the capital of the Central African Republic.

In April scores have died in a series of attacks and assassinations in Mexico, the Philippines and Nigeria.

Serge Benda, the archdiocesan youth coordinator who was at the Mass, told the France24 TV network the attack had occurred after the Gospel reading, following an exchange of fire with police outside the church. He said that five assailants shot at the congregation with Kalashnikov rifles, throwing two grenades into the church, one of which killed Msgr. Albert Toungoumale-Baba close to the pulpit.

Outraged community members carried the body of the slain priest toward the president’s residence, demanding a response from the republic’s security forces. Local press report that the mob passed through a Muslim neighborhood, where a mosque was destroyed and two men were burned alive, before it reached the city center. The mob was dispersed by security forces before reaching the presidential residence.

Cardinal Dieudonné Nzapalainga, the archbishop of Bangui, on May 3 urged calm and an end to retaliatory attacks. “Violence is not the solution to our problems,” the cardinal said.

“Behind these events, I ask myself questions: What is happening? Have there been manipulations, exploitation? Is there [a campaign] to divide the country? Is there a hidden agenda? Let us look for answers to these questions together.”

"Is there [a campaign] to divide the country? Is there a hidden agenda? Let us look for answers to these questions together.”

The church in Bangui has taken pains to depict the violence that has assailed the Central African Republic since 2012 as the result of political, not religious tension, hoping to avoid pitting the nation’s Christians and Muslims against each other. In his statement on the attack, the cardinal urged “heroes” to step forward to “stand together to say no to violence, no to barbarism, no to self-destruction.”

“This is why I appeal to all political, administrative, religious groups, without distinction, to condemn together what happened,” he said. “At the same time I say to all those who are believers that at the moment of trial we must rely on God, who gave us the peace of Christ. I appeal to all to avoid anger, hatred, revenge and reprisals.”

Kobine Layama, the country's chief imam, condemned the attack on Our Lady of Fatima as an attempt to disrupt “peace, social cohesion and coexistence.”

This is the second devastating attack on Our Lady of Fatima. A similar assault by Seleka militia in 2014 claimed 18 lives.

The church is located in the PK5 district of Bangui, a stronghold of the city’s remnant Muslim community; most of Bangui’s and the nation’s Muslims fled to Chad during a previous round of sectarian violence in 2014. The city has been wracked by violence in recent days as U.N. peacekeepers and the C.A.R. military attempted to neutralize armed groups in PK5. That effort resulted in at least 17 deaths, according to community members, who said those killed were unarmed residents of PK5. But U.N. officials charge they were remnant Seleka fighters who had regrouped into a criminal gang and self-defense force within PK5.

In 2013 the Seleka, attacking from the north, overran the capital and briefly seized control of the nation. The rampage that followed provoked the emergence of a counter force, the anti-Balaka, from among the nation’s Christian and traditional groups. The nation has never stabilized, enduring rounds of violence since the Seleka were driven out of power months later.

Nigeria
Across the continent in West Africa, the bishops of Nigeria urged the nation’s president to resign following a horrific attack on a church in Benue State in the “middle belt” region of central Nigeria that divides the mainly Muslim north from the predominantly Christian south.

“It is time for the president to choose the path of honor and consider stepping aside to save the nation from complete collapse,” the bishops wrote, demanding the resignation of President Muhammadu Buhari in a statement sent to the church news service Fides.

“It is time for the president to choose the path of honor and consider stepping aside to save the nation from complete collapse.”

Two priests and at least 19 parishioners were killed on April 24 at the St. Ignatius Ukpor-Mbalom church in the village of Mbalom. Most of the violence in recent years in Nigeria has been related to Islamist extremist groups like the notorious Boko Haram, but this church attack, which came at the beginning of early morning Mass, has been blamed on armed “pastoralists” who have been in conflict with villagers over grazing rights.

In a statement to Fides, which was released as the Nigerian bishops were conducting an ad limina visit to Rome on May 3, the bishops wrote: “These innocent souls met their untimely death at the hands of a wicked and inhuman gang of rampaging and murderous terrorists who have turned the vast lands of the Middle Belt and other parts of Nigeria into a massive graveyard.”

The bishops charge that Nigerian security forces did not respond to appeals for assistance as a threat from the heavily-armed pastoralists, who seek control over contested land to use for grazing, grew more intense. “How can the federal government stand back while its security agencies deliberately turn a blind eye to the cries and wails of helpless unarmed citizens who remain sitting ducks in their homes, farms, highways and now even in the holy places of worship?” the bishops asked.

One of the priests killed, the Rev. Joseph Gor, sought to alert authorities months ago to the increasing threat from the Fulani, nomadic pastoralists who are widespread throughout West Africa. On Jan. 3, he asked for help in message on Twitter: “We live in fear the Fulani are back in the area of Mbalom. They refuse to leave. They continue to pasture their flocks. We have no means of defending ourselves.”

These “desperate cries for security and help went unheeded by those who should have heard them,” Nigerian bishops complain, referring to the two slain priests. The slain priests “could have fled but true to their vocation they remained to continue to serve their people right unto death,” the bishops said.

Philippines
In the Philippines, a Catholic priest was gunned down on April 29 while blessing children just after celebrating Mass in Gattaran, Cagayan on Lozun. The motive for the crime is still unknown as the police investigation begins, but the Rev. Mark Ventura appeared to be a victim of a professional assassination, and he had been active defending Luzon’s indigenous community against mining interests on the island.

Archbishop Sergio Utleg of Tuguegarao has appealed to authorities for a speedy investigation into the killing. “We just lost a young priest, zealous and dedicated, one who smelled like his sheep, to an assassin’s bullet right after he said Mass and was baptizing children,” he said in a statement released on April 29. “We condemn in strongest terms this brutal and cowardly act.

“There have been too many murders already done with impunity in our country by assassins riding in tandem,” he said. “May this be the last.”

In a response to Father Ventura’s murder and the murder of a journalist the following day, Cardinal Luis Antonio Tagle called for church bells in the Archdiocese of Manila to toll at 8 p.m. each day in protest of the wave of killings across the Philippines. Thousands of people believed to be involved with drug sales or trafficking have been summarily executed by police and security forces, according to Human Rights Watch, since the election of President Rodrigo Duterte in 2016.

Alfie’s last days: a little boy’s life and death stoked a furious debate that will not soon end
Kevin Clarke

Cardinal Tagle said the tolling of the bells will “haunt the perpetrators of violence and killing to remember their victims, never to forget them,” reports ucanews.com.

Mexico
Authorities report the discovery on April 26 of the body of a priest who had been kidnapped in central Mexico. Prosecutors in Morelos state said a relative identified the body of the Rev. Moises Fabila Reyes, 83. Father Fabila Reyes apparently died of a heart attack.

He is the third priest killed in Mexico in a week. A total of two dozen priests have been killed in the country since the current president took office in 2012.

“In a few days, Mexico has experienced the worst public safety crises of its modern history. Not only are young people being disappeared and killed, the dimension of this barbarity has reached all levels of society and the church has had a ‘Black April,’” the Catholic Multimedia Center wrote in an article. “Three priests have died in violent circumstances, raising indignation and concern among bishops across the country.”

Just days before his body was discovered another priest was shot dead on the outskirts of Guadalajara, and another was stabbed to death outside Mexico City.

“It is time to take a hard look at our culture and our society, to ask ourselves how we lost respect for life, for all that is sacred,” Mexico’s bishops’ conference wrote in a statement following the most recent round of priest killings.

With reporting from CNS, Ucanews.com, Fides and AP

Hey Toby Gillis--you ought to read Douglas Murray's book "The Stange Death of Europe"--it is full of stories about people like you--I call you reverse colonialists--because our ancestors did bad things then all the descendants must suffer. Western Europe is full of people like you, letting themselves be overrun with immigration, because they feel so guilty about how these poor foreigners were colonialised during the British Empire days, or how native people were exploited by American pioneers, or how many suffered during the Inquisition..... your smug comeuppance attitude is full of revenge for the "sins" of your forebears.....all I can say to you is "Let he who is without sin cast the first stone....."