A former clerk assesses the legacy of Justice Anthony Kennedy, a ‘constitutional romantic’ 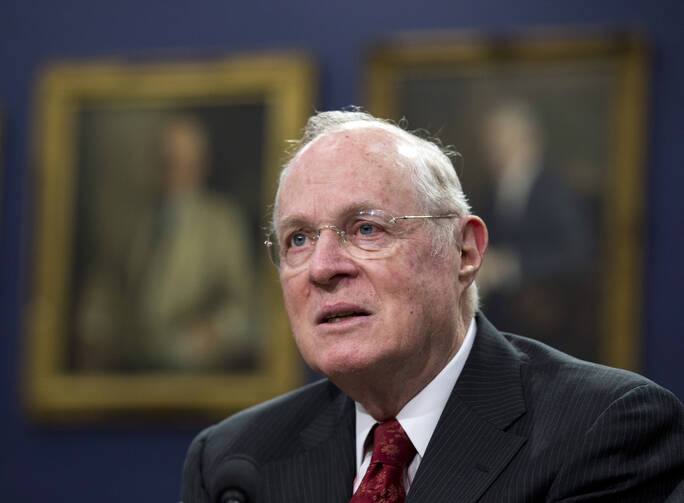 Congressional Democrats and Republicans are preparing for a fight over who will replace Justice Anthony Kennedy after the announcement of his retirement on June 27 opened yet another front in the partisan battles that have characterized the Trump administration. Justice Kennedy had frequently provided the tie-breaking vote on close rulings on a gamut of highly contested social issues: abortion, affirmative action, same-sex marriage, gun control, campaign finance and voting rights among them. He has been depicted in the media as the court’s “swing vote,” alternately cheering and frustrating both its progressive and conservative factions.

But two law professors from the University of Notre Dame do not share that view of the retiring justice. They describe him not as a centrist or impromptu judicial moderator but as a jurist who consistently ruled in favor of personal liberty and free speech.

Notre Dame’s Jeffrey Pojanowski served as a law clerk for Justice Kennedy in 2005 and 2006. He remembers him as “a wonderful boss, gracious, kind and thoughtful.”

Justice Kennedy has been depicted in the media as the court’s “swing vote,” alternately cheering and frustrating both its progressive and conservative factions.

“I never never heard him raise his voice once,” Mr. Pojanowski says. “He was patient with everyone”—including fellow Justice Antonin Scalia, who became well-known for sardonic rebuttals to what he saw as Justice Kennedy’s flights of judicial fancy. “Legalistic argle-bargle” was how Justice Scalia described Justice Kennedy’s reasoning in an opinion striking down part of a federal law limiting the rights of same-sex couples in 2013.

Mr. Pojanowski recalls that Justice Kennedy always took such dissent from his opinions seriously but without animus. Outside the court, he remembers, Justices Kennedy and Scalia had a warm relationship despite the occasional barb from Justice Scalia.

“That was pretty impressive considering the stakes of what they were disagreeing about,” he adds.

“It will be interesting to think about how all of his disparate decisions hang together,” Mr. Pojanowski says.

“He was the author of Citizens United, but he saved [Roe v. Wade]; he saved same-sex marriage in Obergefell at the same time he has chided California for picking on crisis pregnancy centers,” Mr. Pojanowski says. “What holds it together? He’s got a very, almost romantic view about the role of the Constitution in the United States; he has considered himself a protector of individual liberty and he was very strong about the court’s role in securing that.”

He adds, “He was not a political moderate; he was not a Susan Collins on the Supreme Court wanting to split the difference. He had his own way of thinking about things.” Mr. Pojanowski describes that way as “libertarian constitutional romanticist.”

“One thing about Justice Kennedy that people get wrong,” he says, “is they use this term ‘swing justice.’ And I guess that’s accurate in the sense that it captures that his views sometimes took him with the more liberal bloc and with the more conservative bloc every so often, but it really was not that he was that changeable. He had a pretty consistent cluster of judicial views and attitudes.”

Mr. Garnett calls his support of both legal abortion and the right of pro-life demonstrators to protest outside abortion clinics as indicative of Justice Kennedy’s deep esteem for the First Amendment, leading him to defend even such free speech outliers as flag burning and virtual child pornography.

He describes Justice Kennedy as a jurist with “a strong, perhaps idiosyncratic understanding of autonomy.” While alternately infuriating liberals and conservatives, “I think Justice Kennedy would say, ‘I had a consistent approach,’” Mr. Garnett says.

He believes that the justice will also be remembered for “a very robust, maybe grandiose idea of the ability and the role of the court to kind of be a moral tutor, to address hot-button and divisive issues and calm tensions and resolve our disputes.”

That did not always work out as Justice Kennedy may have hoped, he quickly adds, paraphrasing what he calls “the most maddening line of the Casey decision [which reaffirmed Roe v. Wade]: ‘We’re the court; we’ve spoken and when the court has spoken it is time for people to put aside the differences.’”

“That is not how the Supreme Court is supposed to function,” Mr. Garnett says, adding that Justice Kennedy’s “presumptuous” statement “inflamed debate about abortion rather than calmed it.”

Justice Kennedy was a “judicial supremacist” at cultural moments that might have been better served by a show of “judicial modesty,” Mr. Garnett says, adding that at times in composing his opinions Justice Kennedy may have been stretching to rationalize “his outsized understanding of the role of the court.” That may be the reason his opinions were criticized in their time and may be vulnerable to reversals in the future, he adds.

“His efforts to supply high-flying memorable rhetoric, to be the moral tutor of the country, led him to write prose that did not read like a judicial opinion,” Mr. Garnett says. “It sometimes read more like a magical realism novel.”

“It will be interesting to see how enduring his vision will be even if individual decisions are turned back,” says Mr. Pojanowski.

He sees no member of the current court or any in waiting for the job who could replace the “jurisprudentially unique” role Justice Kennedy has played.

Another profoundly evil man walks away from the evil he has done. To construe pornography as "speech," as other idiots have done, and to construe the mass murder of the unborn as freedom, reflects what a bankrupt civilization tolerates, even bestowing the title of "jurist" on this moral monster.

Perhaps Supreme Court Justice Kennedy has a gentle demeanor, but this does not change the fact that The United States Constitution should not be amended, it needs to be upheld, as Due Process is binding in both State and Federal Law. Condoning Abortion, Slavery, and Identifying human persons according to sexual desire/inclination/orientation all objectify the human person, and thus by denying the essence of the human person as a beloved son or daughter, are all the result of an error in Substantive and Procedural Due Process Law.

It is out of Love and respect for all persons that The Catholic Church has always taught that any act, including any sexual act, that demeans our inherent Dignity as a beloved son or daughter, is not and can never be, an act of Love. There is no animus in authentic Love which always serves out of respect for the inherent Dignity of the human person, Created, from the moment of conception, In The Image And Likeness Of God, equal in Dignity, while being complementary as a beloved son or daughter, Willed by God, The Most Holy And Undivided Blessed Trinity, Worthy of Redemption.

There is a basic flaw in our justice system. Why can one person have so much power to decide what is legal or not? A large number of people know the Supreme Court is very powerful and are out of sorts because the new justice could affect the lives of many.

Why does one unelected person have this power? No one designing the constitution foresaw this. The reason is the Supreme Court is political when it shouldn't be.