After three priests are murdered in the Philippines: ‘We will not be afraid.’ 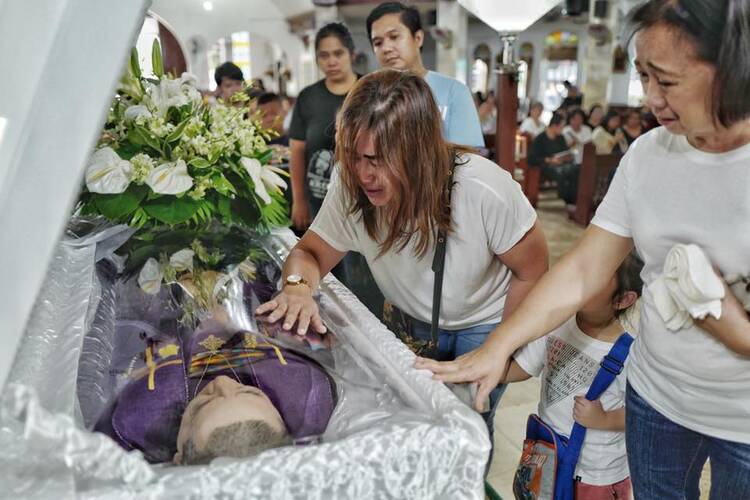 Mourners grieve by the casket of Father Richmond Nilo on June 11 in Zaragoza, Nueva Ecija, Philippines. Photo by Ezra Acayan.

The Rev. Richmond Nilo, 43, stood at the altar of a small chapel in Zaragoza, Nueva Ecija, the Philippines, on June 10. He was preparing for Mass when two gunmen arrived, raining bullets over him. Ten shots, including a fatal one to the head, left him sprawled on the floor, lifeless below a statue of the Virgin Mary holding baby Jesus. Over the altar, a banner with the Tagalog lyrics to the “Gloria” was torn by six bullets.

As news of his death spread on social media channels, church and political leaders alike expressed alarm over a growing culture of impunity for such violent acts, one apparently sanctioned by no less a figure than President Rodrigo Duterte. His frequent tirades against the Catholic Church in the Philippines are believed to have emboldened killers in the recent attacks against priests.

Responding to growing criticism, Mr. Duterte on June 13 denied persecuting priests. He claimed he was even acting to protect Catholic clergy by not publicly revealing the details of investigations that were incriminating of clergy.

“A priest is no better than me,” he said. “Some priests even have two wives.”

Philippine authorities announced on June 15 that they had arrested their “prime suspect” in the killing of Father Nilo, identified as Adell Roll Milan. He was arrested in San Isidro on June 14, the same day Father Nilo was buried. A witness reportedly identified Mr. Milan, a former drug user and alleged hitman.

Father Nilo was formerly the president of the College of Immaculate Conception in Cabanatuan, where he served for 13 years as a school administrator. In a video that circulated after his death, he said that the source of his dedication was the sight of “people helping other people.” He was particularly moved by the generosity of the poor. “If they can give, how much more can we who are given so much?”

President Rodrigo Duterte’s frequent tirades against the Catholic Church in the Philippines are believed to have emboldened killers in the recent attacks against priests.

Footage from a CCTV camera revealed that hours before he was killed Father Nilo had been followed by two men riding in tandem on a motorcycle. They were accompanied by someone in a vehicle who acted as a lookout when the two assassins made their way into the chapel where the priest was preparing for Mass. The national police said on June 13 that the likely motives for Father Nilo’s killing were a land dispute and his involvement in helping victims of rape.

His death marks the third priest slaying in six months in the Philippines.

In December 2017, Father Marcelito “Tito” Paez, 72, was ambushed on his way home from Cabanatuan City, where he had just facilitated the release of Rommel Tucay, a political prisoner charged with the illegal possession of firearms. It was believed that a government crackdown on activists was underway. As the coordinator of the Rural Missionaries of the Philippines in Central Luzon, Father Paez would have been a target.

He was shot nine times. His body was later kept in a casket lain directly on the floor of the St. Joseph Cathedral in Nueva Ecija. At his funeral, a number of supporters called for justice and attested to a life of service that was evident even in his death.

In May 2018, the faithful of Gattaran, Cagayan, were slowly exiting the church after Mass. A group of children rushed to where Father Mark Anthony Ventura, 37, stood and patiently waited to be given benediction. Just as Father Ventura blessed them, gunmen shot him dead, leaving the remaining Mass-goers in shock and fearing for their lives. Described as a zealous priest and a missionary to those on the margins, Father Ventura had been an anti-mining advocate, work that had earned him enemies.

Another priest, the Rev. Rey Urmenta, a former chaplain to the Philippine National Police and presumed safe because of that previous role, barely survived an ambush in Calamba, Laguna, on June 6 with gunshot wounds to the back and arm.

Shortly after Father Ventura’s assassination, Mr. Duterte was in Cebu to attend an annual town fiesta. He surprised his audience with the suggestion that Father Ventura’s murder was linked to affairs with a number of women in his community.

“They say it was the government who had him killed,” the president told his audience. “That’s the crime. But you must [know] he was really handsome.... How can you not die when you have affairs with the wives of the vice mayor, a policeman, a soldier and a businessman?”

The Archdiocese of Tuguegarao responded to Mr. Duterte’s comments in a statement: “Obviously he had enemies,” an archdiocesan spokesperson said. “We do not know who they are or why they had to kill him. The police are investigating the killing from all angles. We do not want to speculate on the reasons for his death. Neither do we want that the investigation be muddled by the spreading of unfounded rumors and malicious insinuations.”

The statement continues: “We are not afraid…. Killing is a sin. It is all wrong. This is not Filipino. This is not Christian. This is not how our parents taught us. The earth, soiled by the blood of Father Mark Ventura, Father Tito Paez and Father Richmond Nilo, is crying.”

Bishop Pablo Virgilio David heads the Diocese of Caloocan, the city has endured the most deaths tied to the brutal war on drugs begun by Mr. Duterte. It has included thousands of summary executions by police and vigilantes. In a post on Facebook, the bishops said that in a recent forum he was asked to offer advice to seminarians “who are losing heart and are feeling discouraged from pursuing their vocation” because of the killings of priests by brazen assassins.

“If a priest is murdered because he defends human rights, like Father Tito Paez, or he speaks out for environmental protection, like Father Mark Ventura, or he protects victims of rape and defends the Catholic Church, like Father Richmond Nilo, and his death causes you discouragement instead of inspiration, then I advise you to forget about the priesthood and leave as soon as you can,” Bishop David wrote. “The priesthood is not for cowards; it is not for the fainthearted.”

He added, “Father Paez, Father Ventura and Father Nilo were not ‘victims.’ Victims are those who had no choice about their fate; it was merely imposed on them. No, these priests made a choice; they opted to be ‘martyrs’, meaning witnesses from the start.”

Bishop David said that it is not their deaths but the way the three priests lived out their vocations that proves their martyrdom.

Senator Risa Hontiveros has filed a resolution compelling the Senate Committee on Public Order and Dangerous Drugs to investigate the circumstances surrounding the murders of the clergymen.

In the Year of the Clergy and the Consecrated Persons, the Philippines finds itself at a crossroads where the faith of its Catholics is sorely tested. Unfortunately, even before the faithful can decide on a course of action, three priests have already paid the ultimate price for their commitment. 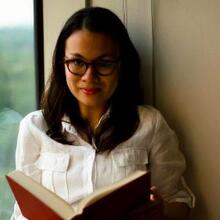 Nash Tysmans is a writer living in Quezon City, the Philippines.

If you want to get appnana online hack then visit here and get it.

Did you know there was a mass shooting last night in New Jersey with one dead and 22 injured some critical? Didn't make the news?

Thanks for sharing, I just like the valuable info you provide for your articles. I’ll bookmark your weblog and take a look at once more right here regularly. I am a writer focused on my profession to spread more issues and tips to develop and works through best paper writing services. You explained all things very simply and in detailed form. This service has over 10 years of writing experience and a background in essay, course work and review writings, also the representatives try to manage strategic partnerships and serves as a subject matter expert on the essay writing search process.