Meet the Hawaiian women leading the fight against a $1.4 billion telescope on a sacred mountain 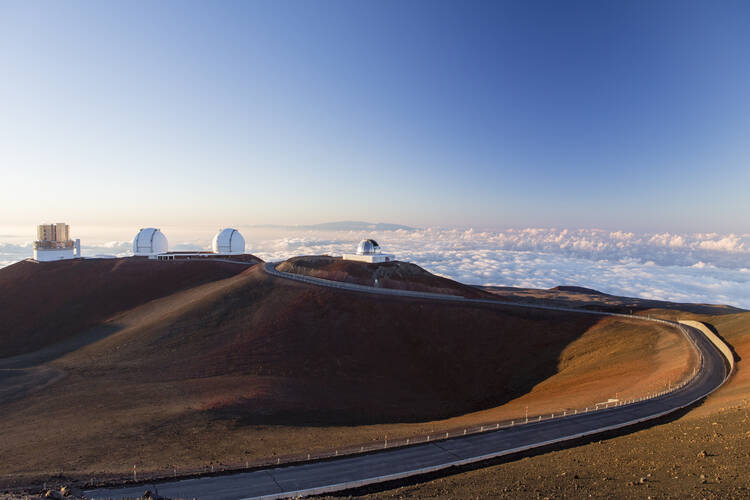 Mauna Kea is already dotted with telescopes, but T.M.T. would dwarf them all. (iStock/Jarin13)

Mauna Kea is now a focal point for Native Hawaiian ku’e (“resistance”), but this time the dispute is not over mineral extraction or tourist-oriented development. The ku’e has been growing since the spring of 2015, when an international consortium announced plans to build a $1.4 billion Thirty Meter Telescope on Mauna Kea—which would have a 98-foot diameter, cover six acres in total, tower 18 stories above the summit and burrow two more below its skin.

To be sure, Mauna Kea, on Hawaii Island, offers some of the best views of the sky on the planet. But it is also one of the most sacred places in Hawaii, and there are already 13 other telescopes on the mountain. The resistance has managed to halt construction a number of times, and T.M.T. officials are now awaiting decisions on two appeals in the Hawaii Supreme Court.

Much of the energy for the ku’e has come from women like Hannah Reeves and Pualani Case. “Auntie Hannah” (an avowed Christian) and “Auntie Pua” (a practitioner of Native spirituality) are linked through their reverence for the land and the inspiration they draw from the gods. The influence of the Hawaiian gods (or nature spirits, as they are called) endures despite the desecration of the land here. The Christian God, despite the aspirations of U.S. missionaries, simply coexists among the other deities.

The influence of the Hawaiian gods (or nature spirits, as they are called) endures despite the desecration of the land here.

Auntie Hannah is a direct descendant of Queen Lili’uokalani, who was overthrown by the U.S. Marines in 1893, five years before the United States annexed Hawaii. She is also in the line of royal kahunas—experts in physical and spiritual caregiving. As a young woman, she was deeply involved in the sacred dance of hula, but she says that changed one evening when the Christian God, whom she refers to as the Creator, told her to stop. Auntie Hannah became a Christian, but she says she still has a relationship with Pele, the spirit of the currently erupting Kilauea volcano, who appeared on the hood of her truck one night after she delivered blankets to the homeless. (“I said, ‘Pele, in the name of Jesus, get off my car!’”)

Now 81 years old, Auntie Hannah says she usually sleeps in her truck, mostly spending her time caring for the poor and campaigning for the recognition of Native land rights. She is unequivocal about Mauna Kea, the home of some of the most revered Hawaiian nature spirits. “You cannot cut into that mountain,” she says repeatedly in public forums.

The consortium behind T.M.T. may not have the bad image of the oil industry, but its violation of indigenous land rights is equally distressing.

Auntie Pua is a teacher, chanter and dancer trained in the traditional sacred arts of oli (chant) and hula. She says it was Mo’oinanea, the nature being who lives near the summit of Mauna Kea, who compelled her to become part of the resistance to T.M.T. She and her family were at Maunaua, a sacred place where prayers and leis are offered for rain, when her daughter, then 9 years old, suddenly said: “The lady from the lake. I see her. She’s talking to me. Mom, the lady asks...‘Can you stop the telescope?’”

Despite her initial apprehension, Auntie Pua leaped into the court battles to stop T.M.T. Hawaii’s Board of Land and Natural Resources first approved the project in 2011, but it has been tied up by appeals ever since; one successful lawsuit, alleging that the board had not followed due process, was initiated by six appellants, including Auntie Pua. The indigenous people of Hawaii cannot stay apart from the political system, she says, “because if we do that they’ll be building something right over our heads.”

Women like the Aunties have found common cause with other indigenous peoples protecting sacred sites. Auntie Pua and other Native Hawaiians have traveled to support the Standing Rock Sioux in their resistance against the Dakota Access pipeline. The consortium behind T.M.T. may not have the bad image of the oil industry, but its violation of indigenous land rights is equally distressing.

The ku’e is about much more than a telescope. Poverty is endemic among Native Hawaiians. They reside in the poorest areas of the state, suffer disproportionately from diabetes and cancer and are one reason Hawaii has a higher rate of homelessness than any other state. The ku’e comes in response to more than a century of corrupt appropriation of land and resources.

“There comes a time when you have the birthright, the obligation and the privilege to say, ‘No, enough is enough,’” says Auntie Pua. “It’s so complicated to save this last bit of our Hawaii. It’s almost overwhelming at times if you don’t align yourself to your true leader, which for me is the mountain.”

There are two remaining appeals before the Hawaii Supreme Court. In the meantime, the consortium says it may consider an alternate site for the telescope—in the Canary Islands.

Update from The New York Times, July 10, 2019: “Gov. David Ige of Hawaii announced on Wednesday that construction will begin next week on a giant telescope on the summit of Mauna Kea, the volcano that looms over the Big Island of Hawaii.” 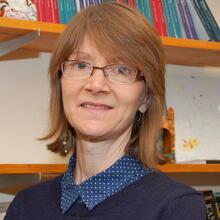 Jennifer Reid is a historian of religions, a John Simon Guggenheim Memorial Foundation fellow and professor emerita at the University of Maine in Farmington.

good introductory piece on Mauna Kea 'White Mountain", short version of Mauna a Wākea "Mountain of Wākea" Hawaiian Sky God, who with Papa (Earth Mother God) created union and gave birth to the islands.
Two points to add to your piece:
1. Cost estimates for the TMT have now balloned to $2 billion, and the TIO, (the international and instiutional consortium backing TMT), is now admitting they donʻt have all the funding to complete , and have now teamed up with another american mega telescope project they had been in compettion with in an effort to combine forces and obtain funding.
2. Any piece about the women standing up for the Mauna — Kū Kia i Mauna — should definately include Kealoha Piscetta, former employee of one of the the summit telescopes who was instrumental in stopping an earlier expansion of the the Gemini Telescopes, the so-called ʻoutriggerʻ project, and has been part of the lawsuits against TMT
There are many many other women involved as well who have played significant and critical roles in this effort, so many that it would be well worth your effort to do a follow up piece, expanding the depth and breath of your coverage of this symbolically huge effort in Hawaiʻi that speaks to and links to the global leaership indiginous communities are providing to resist the global crisis created by unfettered and rapacious transnational capitalism in conjuction with the state entities, educational and finance institutions, industries, media, and scientific communities they utterly dominate.
You make an excellent point when you relate the seemingly benign 'enlightened' science and discovery agenda of the TMT being not so obviously toxic as petro/resource extractive industries, but that is exactly why this case is all the more pernicious, and even more important to correctly see in the same context as issues like Standing Rock. ʻEven Heavenly Astronomy' does not get a free pass to disregard the human rights of Indigenous peoples, or justify the destruction of ultra rare habitat here on Earth — as they scour the heavens for other planets potentially capable of supporting the fragile communities of life found on these artic-like summit conditions atop these tropical ʻislands in the skyʻ Astronomers would suddenly be able to see just how precious life is.

As Lanakila Manguel (one of the young Makua 'Adultsʻ and leaders of the Kū Kia i Mauna), wisely articulated, Donʻt spend billions to find life on other planets, malama (take care of, nuture, protect) life here on this planet Earth!
Great intro peice on an essential segment of the global frontlines in the ʻWar on Errorʻ we must all band together to win, or collectively be destroyed.
kudos to you! jonathan jay, Kauaʻi Island, Hawaiʻi

30 meter diameter. No doubt a multiple mirror telescope capable of moving the mirrors such that they cancel out the distortions of the atmosphere, approaching diffraction limited performance which means as good as it can get. In the green portion of the spectrum, the resolution would be 20 nanoradians. That means resolving objects 18 meters apart on the moon. It should be an amazing planet finder. Beautiful instrument. It belongs in a sacred place. If the mysticism of the telescope clashes with the mysticism of the Hawaians, I hope it can find another high sacred place to rest and do its magic.

If you consider a mountain to be "sacred" you are, by definition, a pagan.

What about Mount Horeb? Were ancient Hebrews pagans?

A telescope needs good viewing and up a mountain a long way from artificial light is ideal.
A mountain is an area of rock higher above sea level than the surrounding land level.
Does the tradition of these Polynesian people acknowledge that the God of Abraham, Isaac and Jacob and the Father of Our Lord is specially resident or present on that mountain?
It is no use calling this spiritual or spirituality and then pretending that it is good; Satanism is spiritual after all!

What would any of God's angels or people have against astronomy?

I hope this writer is not allowed anywhere near children or students who are Christian to teach them that belief in the life death and resurrection of the Son of God and following the guidance of his Spirit is just the same as these relics of Paganism.

When I flew to Los Angeles 47 years ago on business, I got my first view of real mountains during the landing. But more awe inspiring was the experience of driving in the LA basin, looking upward at the sky and seeing it filled with land. No wonder people have considered them sacred.

Would this project bring jobs to Hawaii.
Will native Hawaiians be hired if it does.
If so, not to be callous, but people can still visit the mountain,
while others are given jobs.

A good article, albeit somewhat lopsided. The majority of Native Hawaiians support the telescope, even among those living on the Big Island. Many are scientists, navigators who employ traditional wayfinding techniques, and leaders among Native Hawaiian communities. Native Hawaiians hold a broad range of reasons for supporting or opposing the telescope. In other words, the views of Native Hawaiians are far from homogenous. In fact, Maunakea is sacred to some, but not all Native Hawaiians, and among those, many see Maunakea as no more sacred than other parts of the island that are also used to support the quest for knowledge while simultaneously contributing to diversifying the island's economy. I would love to see a follow- up article that features those voices as well.