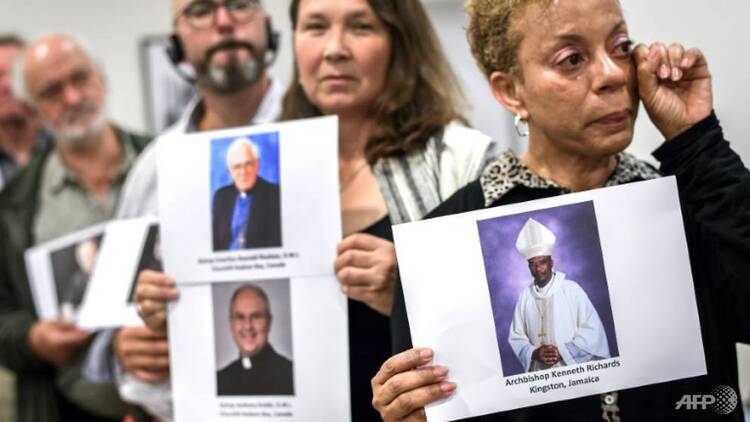 Members of the new ECA group, from Chile, DR Congo, Italy, Jamaica, Mexico, Poland, the United States and Switzerland, hold up pictures of bishops, from their respective countries, accused of having covered up abuse by priests. (Photo: AFP/Fabrice Coffrini)

GENEVA (AP) — Some of the most prominent figures in the fight against sexual abuse in the Catholic Church are joining forces in a new international effort to end abuse and the impunity of bishops and religious superiors who enable it.

The multinational initiative, End Clergy Abuse, was announced Thursday at a press conference in Geneva. One after another, more than a dozen members held up their national flags and denounced an individual bishop who had mishandled a case, from the Americas to Africa and Europe in between.

They demanded Pope Francis revise his ditched plan to create a Vatican tribunal to hold negligent bishops accountable, and vowed to help victims around the world find justice.

The initiative seeks to build on the momentum that clergy abuse survivors in Chile have recently obtained over the case of Bishop Juan Barros, accused of witnessing and ignoring abuse. Last month, every active bishop in Chile offered to resign for their collective failures in handling abuse cases.

One of the founding members of ECA is Jose Andres Murillo, one of the Chilean abuse survivors who had denounced Barros and met with Francis at the Vatican recently to discuss how to repair the damage in Chile and beyond. He told reporters that ECA recognized the progress that has been achieved in some countries thanks to the courage of victims coming forward to raise their voices.

"However there are many more places in the world — including Asia, Africa, the Caribbean and Latin America — where victims' voices are silenced. ECA seeks to be that voice," he said.

Some of the most prominent figures in the fight against sexual abuse in the Catholic Church are joining forces in a new international effort to end abuse and the impunity of bishops and religious superiors who enable it.

Murillo was joined by Peter Saunders, a British survivor of abuse and advocate for victims who was forced to take a leave from the pope's sex abuse advisory commission because of his demand for greater activism. Other participants include Alberto Athie from Mexico, a survivor of abuse by the Catholic Church's most notorious pedophile, the Rev. Marcial Maciel, founder of the Legion of Christ.

Lending advice to the group is Anne Barrett Doyle, co-founder of the online research database BishopAccountability.org, a vast database of abusive priests and the superiors who covered up for them.

The group was in Geneva this week to meet with officials from the United Nations and received an invitation to meet with the head of the U.N. General Assembly later this year, suggesting their collective authority as abuse survivors and advocates had caught attention in the corridors of power. The U.N. committee that monitors implementation of the treaty protecting the rights of the child excoriated the Holy See in 2014 for its mishandling of abuse cases.

If the Pontiff is serious, we can start with taking away the red hat of Roger Mahony in L.A. I can give you 720 million reasons why. But don't hold your breath. It's like a corrupt cop. The code of silence. Priest protect their own, and call it mercy. Where's the pro-life in enabling child rapists?