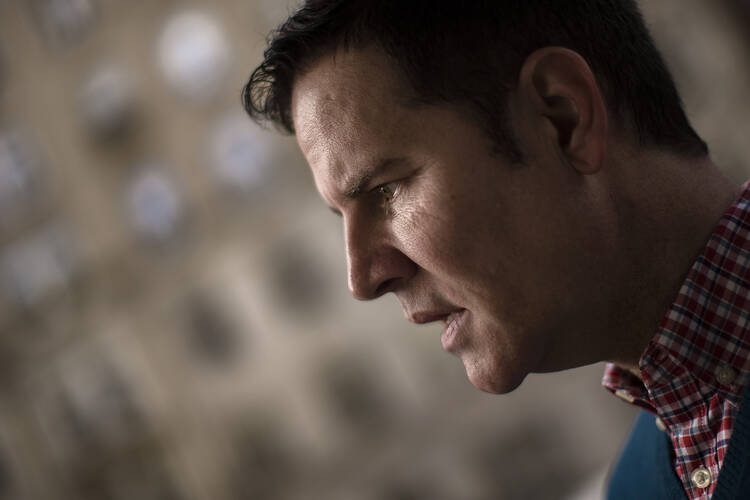 Juan Carlos Cruz speaks during an interview with The Associated Press before a meeting with Archbishop Charles Scicluna near a Roman Catholic church in Manhattan, New York, on Saturday, Feb. 17, 2018. The meeting between Scicluna and Cruz took place the same day Pope Francis revived his lapsed sex abuse advisory commission by naming new members, after coming under fire for his overall handling of the scandal. (AP Photo/Andres Kudacki)

NEW YORK (AP) — A key victim in the Chilean sex abuse scandal said he felt his story was finally heard after an hours-long meeting with a Vatican sex-crimes investigator on Saturday, the same day Pope Francis revived his lapsed sex abuse advisory commission amid criticism of how he is handling the scandal.

The meeting at a Manhattan church between Archbishop Charles Scicluna and whistleblower Juan Carlos Cruz was "intense, detailed and eye-opening," Cruz said to the reporters outside the Church of the Holy Name of Jesus. Scicluna didn't speak to reporters after the meeting that lasted more than three hours.

"For the first time I felt that someone is listening," Cruz said. "I think (Scicluna) was sincerely moved by what I was saying. He cried."

Cruz said they mainly spoke about Chilean Bishop Juan Barros, whom Pope Francis has vigorously defended. Barros is accused by victims of witnessing and ignoring the abuse of young parishioners by the Rev. Fernando Karadima, who was removed from ministry and sentenced to a lifetime of "penance and prayer" in 2010.

Cruz said the archbishop "had tears in his eyes" as he explained what he as a seminarian and others went through. Cruz has described how Karadima would kiss and fondle younger priests and teens.

Barros has denied seeing or knowing of any abuse.

"I never knew anything about, nor ever imagined, the serious abuses which that priest committed against the victims," he told The Associated Press recently.

The meeting had already been scheduled before the Saturday announcement that the pope had named new members to the advisory commission. The initial three-year mandate had lapsed two months ago, on Dec. 17. Francis named nine new members Saturday and kept seven from the initial group. A Vatican statement said survivors of abuse are included, but didn't identify them to protect their privacy.

In New York, Cruz said that Scicluna told him he will gather all the evidence and testimony from victims in the Barros case and speak directly to the pope about it. He also said that the conversation was not only about Barros, but also about the alleged role that several other bishops and Chilean Cardinals Francisco Javier Errazuriz and Ricardo Ezzati played in the cover-up. The cardinals have all publicly denied any wrongdoing.

Cruz said the meeting was "emotionally draining," but that he felt "the empathy" from Scicluna.

He said he insisted that other victims must be heard, and Scicluna took the request seriously.

"There are thousands of other victims around the world that need to be believed and heard and given the same treatment and respect that I have received today," Cruz said.

Francis angered many when he appointed Barros the bishop of Osorno, Chile, in 2015. He vetoed a proposal from the leadership of Chile's bishops that Barros and two other bishops trained by Karadima resign and take a year's sabbatical.

Francis has said he overruled the recommendation and rejected Barros' resignation twice because he had no evidence of Barros' wrongdoing.

But the AP reported this month that Francis received an eight-page letter from Cruz in April 2015 detailing his abuse and Barros' complicity. Cruz had mailed similar versions of the letter to the pope and his ambassador in Santiago but never received any response.

Cruz now lives and works in Philadelphia. During an interview on Friday night with the AP, Cruz said that several people had asked him to send information to Scicluna.

"I know about four or five people, priests and people who are not priests" who want to send information to the archbishop, he said. Some of them also will be interviewed by Scicluna, he added.

Scicluna had planned to speak with him by Skype but switched to an in-person interview in New York after the AP reported that Cruz's letter had been hand-delivered to the pope.

In the letter written in Spanish, Cruz begs for Francis to listen to him and make good on his pledge of "zero tolerance" for sex abuse.

Besides the abuse, he described how young priests and seminarians would fight to sit next to Karadima at the table to receive his affections.

"More difficult and tough was when we were in Karadima's room and Juan Barros — if he wasn't kissing Karadima — would watch when Karadima would touch us — the minors — and make us kiss him, saying: 'Put your mouth near mine and stick out your tongue.' He would stick his out and kiss us with his tongue," Cruz told the pope. "Juan Barros was a witness to all this innumerable times, not just with me but with others as well."

"Juan Barros covered up everything that I have told you," he added.