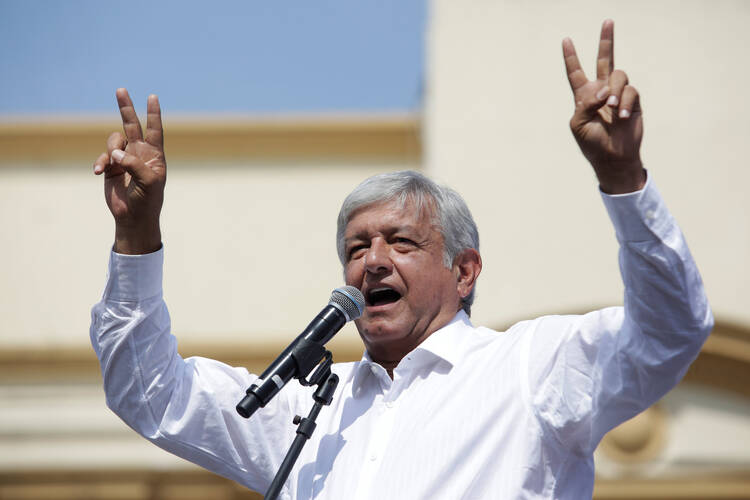 Asked whether he, too, has been approached by organized crime, Rubén Figueroa Smutny’s voice falls silent for a second. “I was sent messages, yes,” he told America earlier this week. “They try to pressure you; they try it with all candidates. But it’s safer just to ignore them. Answering any of them immediately makes you a target for another group.”

A scion of a political dynasty that has dominated political life in his home state of Guerrero, some 250 miles south of Mexico City, Mr. Figueroa is currently running on a ticket for the conservative New Alliance Party. And beyond juggling the interests of his party, local political power brokers and big business in the resort city, he also feels pressure from darker forces: criminal gangs.

“Organized crime is looking for a way into politics, and you see how they try to impose themselves on candidates,” he said. “It is very dangerous, especially for candidates in smaller communities.”

As Mexico gears up for its general elections on July 1, the country is gripped by an unprecedented wave of political violence. At least 102 candidates and political workers have been murdered since the precampaign began in September of last year, according to a report by Mexico City security consultancy Etellekt, published on Sunday.

As Mexico gears up for its general elections on July 1, the country is gripped by an unprecedented wave of political violence.

The firm registered a total of 357 acts of aggression against candidates and campaign workers and estimates that at least 100 are in imminent danger of being killed. Candidates running for state legislature or mayor of small rural communities in areas already plagued by the violence associated with Mexico’s drug war are common targets.

On May 8, Abel Montufar Mendoza was shot in Ciudad Altamirano, a city in the southern state of Guerrero. He was running for a seat in the state legislature and had taken leave as mayor of the town of Coyuca, one of the most violent in a state where criminal groups have killed thousands in ongoing gangland warfare over lucrative drug smuggling routes and poppy plantations. Only two days before, the victim had told his supporters that he had been warned that they might be attacked should they attend the event announcing his candidature.

Three days later, José Remedios Aguirre Sánchez was gunned down in Apaseo del Alto, a town in the central Mexican state of Guanajuato where he was running for mayor. Another shooting, on May 17, took the life of the mayoral candidate in the town of Amacuzac, Andrés García Jaime.

At least 102 candidates and political workers have been murdered since the precampaign began in September.

The sheer scale of the violence reveals what is at stake in the upcoming elections. Most Mexicans are deeply disappointed after six years of government by President Enrique Peña Nieto of the Institutional Revolutionary Party. Under Mr. Peña Nieto’s leadership violence has spiked to levels not seen in more than two decades, corruption scandals make the front page on an almost daily basis and economic growth has become sluggish.

The P.R.I.’s candidate, José António Meade, is trailing in every poll behind the leftist populist Andrés Manuel López Obrador, who appears to be heading for victory after two failed attempts in 2006 and 2012. On the state and local level, Mr. López Obrador’s Morena Party is also poised to grab governorships and crucial municipalities.

Dark forces appear to have noticed the impending political change and have inserted themselves as violent players in the campaigns. Most observers believe organized crime is the principal culprit of the violence.

“Organized crime is wary of the direction the country is going,” Gerardo Priego Tapia, a former senator from the southern state of Tabasco, told America. He works on the campaign of presidential candidate Ricardo Anaya of the conservative National Action Party, running second after López Obrador in most polls. “Organized crime is trying to influence their square meter, which makes them more dangerous to mayors than to politicians on a higher level.

“If you’re a drug trafficker, an arms trafficker, a human trafficker, you need to get the local authorities to be on your side,” he added. “So the gangs ask themselves: Who’s on my side? Which candidate will work better for me? Violence against a candidate is a way to impose their will.”

According to José Reveles, a veteran reporter who has covered both organized crime and politics for almost 50 years, it is vital to the interests of organized crime to impose their will on local elections especially. In practice, this means killing candidates unfriendly to their interests or intimidating candidates so they drop out of the campaign.

“Criminals not only want to make sure that local authorities leave them alone as they traffic drugs, guns or people,” he said. “Gaining control of a municipality also provides gangs with access to property and tax records. It provides them with the information they need to know who to extort and who to kidnap.”

The attacks have many would-be politicians running scared. As of the last week of May, some 1,000 of them have given up their candidacy altogether. Others, such as those campaigning in the central state of Estado de México, have hired their own bodyguards and are demanding more police protection from the federal government.

The attacks have many would-be politicians running scared; some 1,000 of them have given up their candidacy altogether.

Mexico is no stranger to political violence. Campaigns are usually marred by violent scuffles between rival parties, accusations of vote-buying and electoral fraud and attacks on candidates. This year, however, the violence seems more extreme than usual, compelling even the Catholic Church, which traditionally treads very carefully in a country with a strong separation between church and state, to warn of the disrupting effects of the hundreds of attacks on candidates and campaign workers.

“For the good of Mexico, we have to overcome political and ideological differences and unite to search for that which is good for our fatherland,” said Auxiliary Bishop Gonzalo Alonso Calzada of the Archdiocese of Oaxaca on May 27.

In Guerrero, an impoverished rural state where the continuing struggle between drug trafficking gangs, law enforcement, the military and citizen militias has become akin to bloody guerrilla warfare in some communities, Bishop Salvador Rangel Mendoza of Chilpancingo even met with the leader of a criminal gang on Good Friday, seeking a pact to quell the violence in his region. He told Mexican media that he believed he had no choice: “I have always said: Guerrero is in the hands of the narcos. The official authority has been replaced by drug traffickers.”

With the violence seemingly out of control, most commentators fear that more attacks will follow in the last month before the election.

“There is very little that the federal or state authorities can do to stop the violence in the next few weeks. The problem simply runs too deep,” Mr. Tapia said. “Almost no crime is solved in Mexico, and the impunity continues to incentivize the criminals.”

Mr. Figueroa believes things will get worse before they get better. “Here in Guerrero the state is almost gone and has left organized crime to fester,” he says. “Our current politicians have no interest in solving the problem.”

Despite the danger, I humbly urge Church leaders in Mexico to courageously speak out against the violence committed against so many of the nation's people. Our nation must stop demonizing immigrants, and since I believe that economic development helps lead to stability, as a nation we should increase trade with Mexico.