Not all Brits loved the royals or their wedding 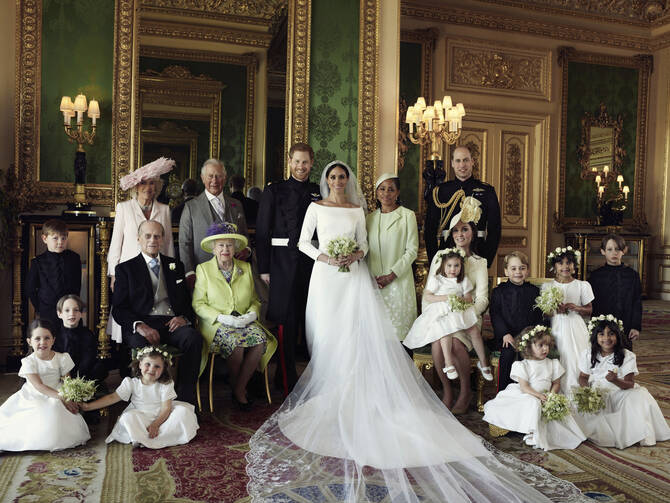 All week leading up to the nuptials on May 19 in increasingly frantic media bulletins, Britons had been urged to overwhelming joy at the marriage of one of the royals—Prince Harry, the spare, not the heir—to the American Meghan Markle. As the big day approached, if you had picked up practically any newspaper or switched on any TV news show, you would have presumed that the entire populace was beside itself with excitement. The national broadcaster, the BBC, was probably the worst, basing its extensive and fawning coverage of the royal marriage on the false assumption that this was an occasion of great national importance that had all Britons enthralled.

Yet there has been plenty of evidence of a significant lack of interest in the royal wedding among many Britons. People were not slow to announce that they were determined to do something else that Saturday: tidy the garden or play golf, generally avoid the television and laptop, or, as I had heard several people say, spend the morning painting a wall white and then watching it dry for the rest of the day.

In the United Kingdom our “republicans” are folks who favor doing away with the monarchy completely. Reuters reported that one prominent republican, Labour Party leader Jeremy Corbyn, would be engaged all day at an economics conference and would not be watching.

Now, this could admittedly be selective hearing on the part of your friendly correspondent, a person not known to have ever expressed the slightest sympathy for the unelected hereditary monarchy, whose Hanoverian predecessors were never called to account for their late-18th-century attempted ethnic cleansing in his native Scotland.

This time round, one opinion poll even pronounced that the British public’s “love affair with the Royal Family is at an end.” Despite the sycophantic paroxysms of the media in the United Kingdom, a lot of us just did not care. Many had serious questions about the wedding’s cost to the public, especially set against the continuing social cost of the Tory government’s continuing austerity measures. The government admitted that the ceremony cost around 32 million pounds ($43 million), the royal family contributing £2 million ($2.66 million) of that. The bride’s dress alone was reported to have cost £300,000 ($400,000).

Others were disturbed by the sweeping of homeless people from the streets around Windsor, a small well-set town to the west of London where the royals have one of their many taxpayer-funded castles.

The blatant display of wealth and privilege was not to be tarnished by any evidence of poverty.

The poll published by the YouGov organization found that 66 percent of the British public declared they were not interested in the Windsor wedding, that most planned a normal weekend (60 percent) or would be working on the day of the big event (10 percent). And almost 60 percent said the Royal Family should pay the full cost of the wedding, including the cost of policing and security. Asked if, given the choice, they would want to contribute their own taxes to the extravagant event, 76 percent said no.

The poll was commissioned by Republic, an organization that campaigns for the abolition of the monarchy and its replacement with a democratically elected head of state. But even the stalwart monarchists at the BBC gave a little airtime to those whose admiration for this expensive anachronism fell short of the perfection that the national broadcaster demands of all Britons.

The House of Saxe-Coburg-Gotha rebranded themselves soon after World War I as the royal house of Windsor, to put some needed distance between themselves and their German lineage. The line had passed sideways to them from Hanover on the death of Victoria in 1901. They at least deserve a tip of the hat for their mastery of public relations, keeping alive their myth and deference from the public, maintaining their entitlement and shoring up this society’s inequality.

If you are a monarch who claims, or at least hints, that your position and privilege is divinely ordained, you have got to be assiduous at maintaining your credibility. A compliant media—willing to ignore that this was a display of privilege, entitlement and elitism at a time of increasing poverty and hardship for many across the country—is crucial

The blatant display of wealth and privilege was not to be tarnished by any evidence of poverty. A converted double-decker bus used by a Windsor-based charity as a shelter for the homeless was impounded by Thames Valley Police two days before the wedding. Rough sleepers, as homeless people are called in the United Kingdom, were moved out of the area, their sleeping bags taken to storage. No, the world’s media could not be allowed to witness any homeless street sleepers. Yet as a wedding present from his grandmother, the groom woke up on his wedding day to the news that he would become the Duke of Sussex and his bride the Duchess. Research so far has not found evidence that the people of that county were consulted.

British summer weekends are perhaps unique in the world. They are remarkably egalitarian. Summer sports events include the F.A. Cup Final or, to the north, the Scottish Cup Final. These football (or soccer, if you insist) matches are established parts of Britain’s summer rituals, like tennis at Wimbledon or golf’s Open Championship.

They can be indulged or ignored; if you go to the supermarket instead, nobody will think the worse of you. The media manage to report on these events calmly enough, without any propaganda to suggest that the whole country is, or ought to be, really excited about them.

One enduring mystery for many people of these four nations is why so many North Americans in particular are obsessed by the Windsor dynasty, having in their own history the rejection of unearned privilege in favor of democracy back in the 1770s. The many TV “man on the street” interviews around Windsor included more than a few American accents; tourists comprised a significant percentage of the crowds.

The ones the British media chose not to interview, the native indifferent, went more or less unremarked upon—this time. But this latest royal wedding may yet prove a turning point in how class division and entitlement are treated in Britain.

David Stewart, S.J., America’s London correspondent, is a native of Scotland, lives and works at St. Ignatius Jesuit parish in North London and works in various Jesuit ministries across the capital and Britain.

There is an anti-elitist movement in the United States too. Most voted for Trump and his defense of the common man.

Though one of the big sellers last weekend was the heart shaped donut at Dunkin Donuts.

I'm not sure that we Catholics have much to complain about the House of Windsor. After all our Head of State is also not democratically elected and also claims to have been selected by the wisdom of the Holy Spirit. Not a whole lot of difference is there?

The Pope is prayerfully, albeit not popularly, elected by his peers. Remind me, please, of Queen Elizabeth's election. I would add that tracing one's succession from St. Peter would trump succession from King Henry VIII.

Note that Fr. Stewart wears a coat and tie, not a Roman collar, honoring his disdain for any form of distinction among human beings. Excepting those who can't afford a coat and tie.

The obsession of Americans in the monarchy is only appropriate. We are busy setting up our own aristocracy and class system. By pejoratively calling our inheritance taxes "death taxes" and subsequently reducing them, we set up the system to reduce class mobility and create an aristocracy. So, in a bit, we'll have our own princes and princesses to before whom to grovel, saving the trip to Britain.

I don't recall voting for the pope, my bishop, or any of the priests assigned to my parish. And wouldn't it be fair to say that most, if not all, of the cardinals enjoy a standard of living that far exceeds the average person? Let's not forget that the clergy itself is an exclusive club, one in which an "accident of birth" (X & Y chromosomes) is required to join.

David is spot on. (I have a friend whose family drew funny things on the Queen's face, when she appeared on their television for her Christmas message.)

Doesn't it go without saying that it's impossible to find something that everyone agrees on? I would also wonder about the breakdown of interest by sex. It seems to me that this type of article gets written more often when the event is of more interest to women than men.

30 million people in the US watched, more than the NBA finals, the baseball World Series, more than watched the World Cup in the US. Someone cares, maybe just not for reasons that you approve of.