Trump and the Art of the Nuclear Deal

Trump and the Art of the Nuclear Deal 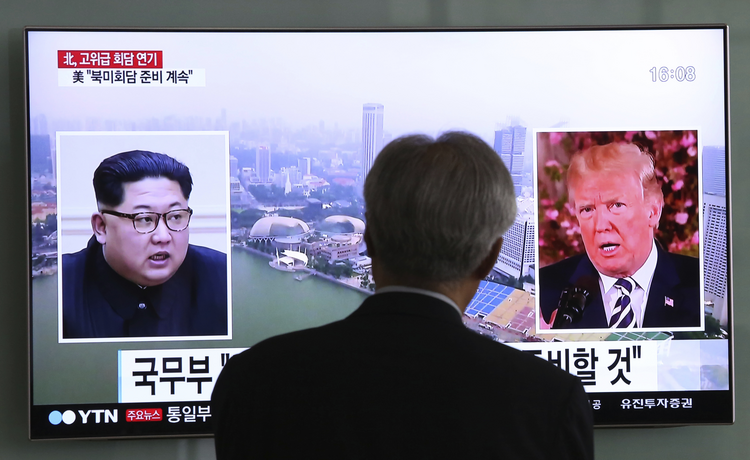 During President Donald Trump’s announcement that the United States would be leaving the Iran nuclear deal, he could not stop himself from mentioning that his secretary of state was on his way to North Korea. Mike Pompeo would be preparing for the president’s upcoming meeting with the leader formerly labeled “Little Rocket Man.”

The juxtaposition of the two countries was no accident. Mr. Trump seemed to say, “Trust me with Iran; I know what I’m doing.” Indeed, two days later, Mr. Pompeo returned to the United States with three American prisoners from North Korea. Kim Jong-un had released the men into his custody.

Later that day, the president tweeted that the meeting with Mr. Kim would take place on June 12 in Singapore: “We will both try to make it a very special moment for World Peace!”

The false alarm in Hawaii is a nuclear wake-up call for everyone.
The Editors

While Trump taunts North Korea, what can we learn from the Cuban Missile Crisis?
Antonio De Loera-Brust

Mr. Trump deserves credit for bringing Mr. Kim to the table. Perhaps the bombastic exchanges between the two leaders will somehow lead to an unprecedented understanding between North Korea and the United States. And pulling out of the Iran nuclear agreement could, in theory, result in a better deal with Iran somewhere down the line.

In both cases, it is early in the game. There is no deal yet with North Korea, and it remains to be seen if Iran will continue to honor the nuclear agreement with the remaining signatory states despite the imposition of U.S. economic sanctions. But beyond relations with Iran and North Korea, the way Mr. Trump is wielding economic and military power will come with collateral costs.

The United States left China, Britain, France, Germany and Russia in a very difficult position by stepping away from the Iran deal. Even if unpredictability and the willingness to walk away from commitments can break stalemates with North Korea and Iran, such actions tarnish U.S. credibility in future multilateral efforts.

Beyond relations with Iran and North Korea, the way Mr. Trump is wielding economic and military power will come with collateral costs.

Mr. Trump, who in his business endeavors often capitalized on short-term gains, may not be concerned with the status of the United States in 10 years. But U.S. citizens should be. Misguided foreign policy decisions can reverberate for decades.

Iran’s ongoing support of Hezbollah and Hamas merits a change in course. Yet Mr. Trump could have heeded the advice of President Emmanuel Macron of France to negotiate with Iran without walking away from the existing agreement. Together with U.S. allies, Mr. Trump could have helped Iran develop a more stable economy, the surest path to peace.

Being unpredictable sometimes leads to a better deal in business, but walking away from international commitments foments mistrust among allies. U.S. foreign policy cannot become a showcase for one administration’s presumed deal-making prowess. If things fall apart, the United States does not get to file for bankruptcy and start another country.

Basically a muddled article leaving a lot out in order to be anti-Trump.

It is probably impossible for there to be a sensible and permanent nuclear deal. Unless China dictates it. China will not allow a Western friendly and prosperous North Korea on its borders. It would put too much pressure on China to change. Therefore it will not happen.

I hope I am wrong but South Korea has already caved on human rights.

The obvious has happened. It may be almost impossible for China to allow any concessions by North Korea. Where will the trade agreement with China go? What will South Korea's reaction be?

Part of any deal is always the option to walk away from it. Both North Korea and the US walked away from the deal. The North Koreans have been doing it for years but we never learned how.

The following is being discussed as part of the talks with North Korea.

Ask any Native American how good is the word of the United States. The. word of the US is more reliable, the more powerful the other party. This flim-flam artist welcher of a president may actually represent what we truly are. What we always have been. Scary thought.

Editors
Your statement :
"US foreign policy cannot become the showcase for one administration's deal-making prowess"
Is an excellent description of the so called "Iran Deal" forged by the Obama Aministration. It was a deal for the sake of a legacy deal ...but so obviously flawed and lacking that the administration could not submit it to the Senate as a treaty because of the assurance that it would fail to get approval.

The Republican legislature was committed to Obama's failure in anything he tried. There was no hope for an honest appraisal of the agreement or engagement. The Republican politicians are politicians first and Americans third.

Stanley
Chuck Schumer and some 8 to 10 also stated they would vote against it More importantly ....if you don't have a 2/3 vote to approve, then you don't have a treaty. What President Obama did unilaterally fits exactly what the Editors have condemned in this article .

Yes, the AIPAC factor. Aside from that, Obama could still have negotiated with Shumer. The Republicans, on the other hand, finally overcame Obama's original naivete that he was dealing with traditional american politicians and not politically motivated obstructionists. You seem to be saying that Trump is correcting Obama's impropriety in the standards of governance. Trump doesn't even care about the spirit of the constitution. I just hope that this bone spur hero doesn't propel us into conflict. that Obama was trying to avoid.

Stanley
Would that it were a simple matter of politics as you describe.....in fact the Obama Aministration outsourced the entirety of the inspection provisions to a series of "side agreement between Iran and the UN IAEA. Susan Rice had the audacity to even state that the Obama Administration had never seen those Side Agreements and the IAEA refused to disclose them. Yet the Administration boldly claimed it was entitled to "anytime , anywhere inspections" See Washington Post July 27, 2015. That was/is a blatant lie! The impropriety was in Obama's unilateral /non treaty action AND THE MISREPRESENTATION OF ESSENTIAL TERMS.

This article also appeared in print, under the headline “The Art of the Nuclear Deal,” in the May 28, 2018, issue.