The false alarm in Hawaii is a nuclear wake-up call for everyone. 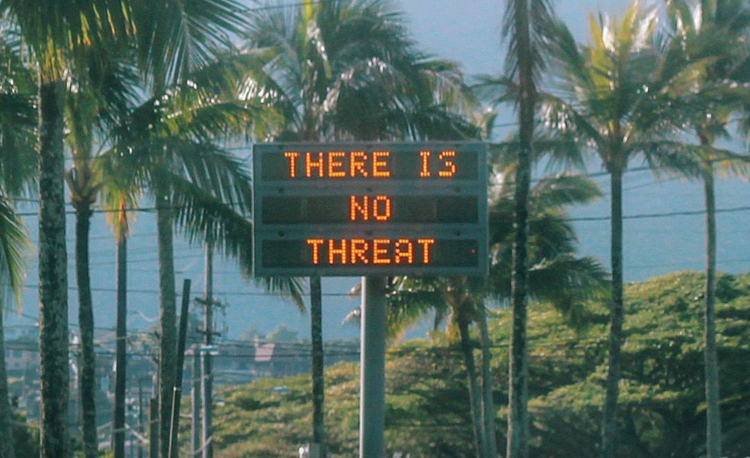 An electronic sign reads, "There is no threat" in Oahu, Hawaii, after a false emergency alert that said a ballistic missile was headed for Hawaii on Jan. 13. (CNS photo/Instagram/@sighpoutshrug via Reuters)

The people of Hawaii have long been attuned to the risk of attack from abroad. The shadow of Pearl Harbor still looms large over those islands, as does the likelihood that should North Korea decide to launch a nuclear missile, Hawaii would be a target. That threat was brought into stark relief when, early on a Saturday morning in January, residents received a cellphone alert from the state’s Emergency Management Agency warning: “Ballistic missile threat inbound.” For almost 40 minutes, many in Hawaii believed their lives were about to end.

The warning was revealed to be due to human error. And there appear to have been no panic-induced casualties. But it is alarming that there were apparently no safeguards to prevent such a mistaken warning. As more states take precautions to prepare for a possible nuclear attack, they should ensure there are reasonable protections against setting off a false alarm and the panic that might follow.

For almost 40 minutes, many in Hawaii believed their lives were about to end.

A real attack would be detected by the military, which could then prepare for a counterstrike. According to Cold War-era protocols, a decision to retaliate must be made within minutes, for fear that our missiles would be destroyed otherwise. Today, however, it is imprudent to insist on such a short response time. The doctrine of deterrence can still be served by keeping submarines at sea armed with nuclear missiles ready to launch a counterattack. Such a policy would ensure we do not launch a first strike under the mistaken belief we are under attack.

Nuclear strategy must also account for the possibility of nonhuman error. Systems have suffered glitches before and shown incoming nuclear strikes when there were none. In 1983 only the instinctive reaction of the Soviet officer on watch prevented a Soviet missile launch in response to a mistaken warning of a U.S. strike. Also of concern is our missile warning system’s vulnerability to hacking, whether by a rival nation, a non-state group or even a hostile individual.

While Trump taunts North Korea, what can we learn from the Cuban Missile Crisis?
Antonio De Loera-Brust

The false alarm in Hawaii is a wake-up call for everyone. The United States must develop both better warning systems and deterrence tactics. In the long run, we must find our way out of the predicament of mutually assured destruction. Pope Francis has been clear on the need for disarmament. That is a worthy goal for the entire international community. In the meantime, U.S. Catholics should urge their government to do what it can to de-escalate the nuclear tensions on the Korean Peninsula. If we do not, perhaps the next warning about an incoming missile will be a real one.
More: War & Peace