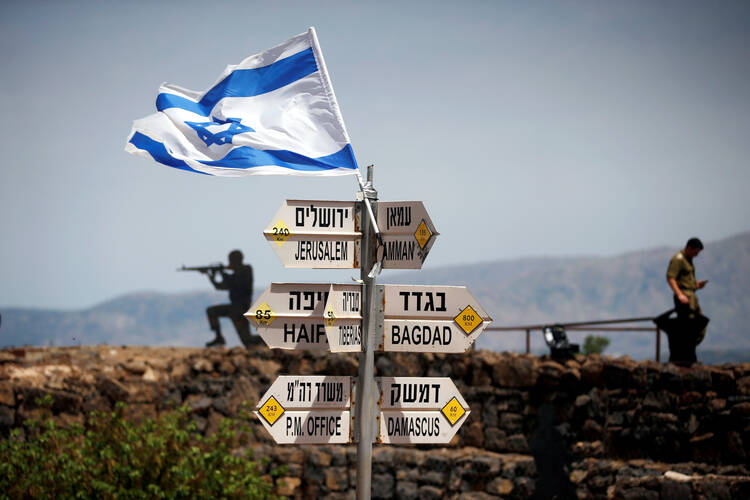 An Israeli soldier near the Syrian border stands next to signs pointing to different cities from Mt. Bental May 10. (CNS photo/Ronen Zvulun, Reuters)

Last week, President Trump undid years of diplomatic negotiations and against the advice of U.S. allies announced that the United States would withdraw from the Joint Comprehensive Plan of Action with Iran. Almost every expert under the sun, including his own intelligence chiefs, affirmed that Iran was abiding by the nuclear pact and that the U.S. decision to leave it would undermine U.S. credibility in the world, sow conflict and set back efforts to contain nuclear proliferation.

Why did Mr. Trump choose to leave the agreement at a time when he is negotiating a similar agreement with North Korea? Part of it may be the politics of pique, with Mr. Trump determined to undo all of Barack Obama’s hard-won achievements as president. If walking away from the pact increases the likelihood of war, he does not care, just as he does not care that undoing Obamacare will leave many Americans uninsured or that gutting regulations on climate and the environment will increase global warming and pollution.

He does appear to care about currying favor with his chief financial backers—such zealous-Israel supporters as Sheldon Adelson, Paul Singer and Bernard Marcus. It may be for that reason he has joined himself at the hip with Israeli Prime Minister Benjamin Netanyahu, or maybe he simply recognizes a kindred spirit. Mr. Netanyahu never ceased decrying the Iran pact and now has new political reasons for railing against its perceived shortcomings. Fending off corruption charges that threaten his hold on power, the prime minister, like Mr. Trump, wants to distract public attention from allegations of criminal misconduct.

In his presidential campaign, Mr. Trump presented himself as a man too rich to be bought, a critic of the disastrous 2003 invasion of Iraq under George W. Bush and the toppling of Libya’s Muammar Gaddafi under President Obama. But since becoming president, he has shown himself to be both venal and militaristic, a supporter of the aggressive interventionism he criticized as a candidate. Far from steering the United States away from foreign entanglements, he has cozied up to Saudi Arabia’s ambitious young crown prince, taken us deeper into wars in Syria and Yemen and is now deliberately stoking conflict with Iran, reimposing sanctions to ruin its economy and trigger regime change.

It looks a lot like 2003 redux, with President Trump’s new national security advisor one of the same neocons who urged Mr. Bush to invade Iraq.

It looks a lot like 2003 redux, with President Trump’s new national security advisor one of the same neocons who urged Mr. Bush to invade Iraq. Whatever small shard of daylight existed between the U.S. government and Israel under prior administrations is now closed. Together with its recognition of Jerusalem as the capital of Israel, the Trump administration has signaled it will support any and all moves by Israel, whether against Iran or the Palestinians. Within 48 hours of the announcement, Israel struck dozens of Iranian targets in Syria in the largest aerial attack mounted by Israel in decades. While London, Berlin, Paris and Moscow called for calm, the White House blandly championed Israel’s “right to defend itself.”

Peter Beinart wrote last week in The Forward that there are now two Wests. One West is represented by Berlin, Paris and London and upholds international law, democracy and diplomacy. The other West is represented by the United States and Israel, countries governed by two leaders who demonize journalists, who do not support democracy, who do not seek détente and who regard regime change as legitimate and desirable. Mr. Beinart describes himself as an American Jew and liberal Zionist in the unusual position of wanting to strengthen the leaders of the first West against the second.

“I don’t want Merkel, Macron and May to seek an accommodation with Trump and Netanyahu on Iran. I want them to stand up for the principles that the American and Israeli governments have betrayed. Appeasement has not worked,” he writes.

Democracy is based on a moral ideal—that every member of society possesses rights, that one person’s rights are no greater than any other’s. For Israel to rule over Palestinians ad infinitum, depriving them of the right to self-determination that Zionists claimed for Jews in establishing their state, is a betrayal of its own founding principles. U.S. history is deeply riven with its own iniquitous hypocrisies—slavery, the subjugation of Native Americans, plots to overthrow foreign governments, wars of aggression. To them can be added U.S. complicity in Israel’s misuse of power, the refusal to challenge it or even name it in the American public square. In the last six weeks, 45 unarmed Palestinian protesters have been killed in Gaza and more than 4,000 wounded as, with few exceptions, our politicians remain silent.

“The corruption of the best is the worst,” said Ivan Illich. The iconoclastic social critic referred to the church, but the statement applies just as readily to democracies led by leaders without scruples or principles. The Iran nuclear deal was a painstaking diplomatic effort to reconcile competing interests between countries and to resolve differences peacefully. The United States’ withdrawal from it green lights more violence in a region already awash in it.

Iran is all about violence and deception. What qualifications does this author have to discuss this subject. No more that the average reader here. Maybe less since some will read both sides of the argument without using ad hominems.

J Cosgrove is all about violence and deception. What qualification does he have to understand the subject? No more than the average Russian disinformation agent. Perhaps he will realize the irony in using an ad hominem while decrying the use of an ad hominem. Perhaps not.

Mr. Murphy does me a favor each time he replies to a comment I make. I appreciate his implied support which is consistent.

Oh please! Did not vote for the Donald, but facts are inconvenient things—- Israeli intelligence just found the Iranians are cheating on the deal, and Netanyahu revealed it recently in a major speech. Look, I’d like to sit at the cool kids’ table too, but I’d rather know the truth. Iran is also the biggest sponsor of terror in the region. I’m all about diplomacy, but Iran needs to be put on notice that they can’t get away with as much anymore when the US chooses to lead in negotiations.

Extremely well written article that summarizes conclusions that the author has drawn. The article would be stronger if it cited some of the facts that the conclusions rest upon.

Wonder if that $3 million contribution Mr Adelson gave last week, as Paul Ryan waited outside, had any influence...
I'm concerned at entanglements that seem to isolate us. And most concerning to me, America's word and promises won't be trusted. She is very correct, talks with North Korea are very important, most so to the whole world than this rushed change to Jerusalem.

Ms Patterson has simply been unable to get over her personal grief and inability to accept the election of a mouthy , boorish , billionaire non politician over a professional politician whom she personally respects and admires. You need only to read her post 2016 election collection of lamentations published in this magazine to understand just how deeply and unforgivable she finds the Clinton loss to be.
You can be guaranteed that no accomplishment by Mr Trump will ever earn anything but her personal scorn and her immediate repetitious regurgitation of his many and all too evident personality flaws.

I'm afraid the end game for Trump and his advisors (excluding Mattis) is to bomb Iran. With the agreement with Iran torn up by Trump, Iran will go back to making fissionable material. This will provide the rationale for America ( or maybe its surrogate Israel, or both) to go to full scale war against Iran. Of course the irony with this hypothetical is that Trump may get the Nobel if peace comes to the Korean peninsula.

Apparently North Korea has pulled a lot of its advisers out of Iran. May be temporary so we will have to see.

North Korea has been the main source of technology for Iran's nuclear program and missile development.

Funny, the author and no commenter mentions Russia(except Mr. Murrphy calling me a Russian troll) Without Russia and North Korea, Iran would have nothing in terms of lethal technology.

The phony Democratic Party attack on Trump and Russia prevents Trump from negotiating with Russia over Iran and Syria.