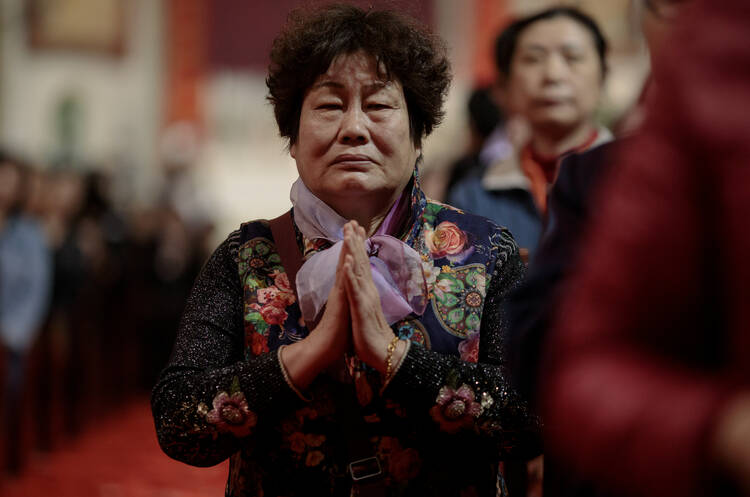 A woman prays during Holy Thursday Mass March 29 at the Cathedral of the Immaculate Conception in Beijing. (CNS photo/Damir Sagolj, Reuters)

Fresh off the plane, you want to let your family know that you landed safely in Guangzhou, but Facebook and Whatsapp are blocked, so first you need to turn on a virtual private network (VPN), an essential workaround for anyone who wants to use the internet without censorship in China. On state-sanctioned social media platforms certain words are banned and information about sensitive topics, like the Tiananmen Square Massacre and Tibet, is restricted. Criticism of the government or of the Communist Party can lead to a visit from state authorities and even time in prison.

Control over the citizenry is a first-order concern for the People’s Republic of China, and it is in this environment that the Vatican is attempting to create space for Catholics in China to practice their faith. Today there is an “underground” church as well as the state-sanctioned Chinese Patriotic Catholic Association. Precise numbers can be difficult to come by, but most assume the two communities are similar in size, and the members of each often intermingle, sharing the same worship spaces and priests; both have suffered persecution by the state.

Criticism of the Communist Party can lead to a visit from state authorities and even time in prison.

The potential agreement between Beijing and Rome would bring these two communities together, unite the hierarchy of the underground and registered churches through the consolidation of bishops, and provide a framework for the joint appointment of religious leaders. Any deal with Beijing will presumably involve the government taking more control over the lives of Catholics in China, and it needs to be asked if that is actually good for the faithful Catholics living here.

The P.R.C. sees the Roman Catholic Church as a foreign entity and the pope as a foreign sovereign. A fundamental aim of the agreement on Beijing’s side will be to limit the potential influence of the Holy See on Chinese citizens and to increase its own control over the entire Catholic community in China. President Xi Jinping is suspicious of foreign influences in the country that have the potential to undermine the state. These influences include not only Western concepts of freedom and individualism but also religion because it represents a powerful alternative worldview.

As has been reported in America, crosses have been torn off of churches and bishops have been arrested in recent months. This repression has happened within both the registered and underground church communities, with The Guardian noting that state-sanctioned churches have not been free from state repression. This leads to serious questions about the value of Catholics cooperating with the state in the first place.

A fundamental aim of the agreement on Beijing’s side will be to limit the potential influence of the Holy See on Chinese citizens.

This is not 1980, and China is certainly not the U.S.S.R. But the comparison can help us to better understand the way the Chinese government views religion, in particular by considering the role religion played in undermining government authority in the Soviet Bloc. In Poland, for example, the state tried to maintain complete monopoly on not only physical property but also intellectual life. The Catholic Church broke both of these monopolies. First, by allowing people a place to assemble safely, and second, by giving people a counter worldview with revolutionary potential.

These alternatives were left at least partially outside of state control, and they freed people to think about the world differently. The church created the space for people to breathe—physically, intellectually and spiritually. It is certainly not a coincidence that Solidarity, the independent labor movement, was founded after the first visit of St. John Paul II to Poland. Though the church was not the only catalyst behind the fall of totalitarian government in that country, it played an integral role. Within China, an entire academic field has evolved to study the history of the Cold War and the fall of communism in Europe. The example of Eastern Europe has not been lost on them.

In Poland, the church created the space for people to breathe—physically, intellectually and spiritually.

Living and working in rural China and traveling across the country to cities large and small, I have been lucky enough to meet and talk with Chinese people and learn about their understanding of religion. The two themes I picked up in discussions with non-Christians is that religion is seen as a superstition or, even worse, a poison that stops poor people from working hard, as they ask God to provide for their needs instead of raising themselves up with their labor.

On a long train ride to Beijing, I spoke with a woman who wanted to know why Americans believed in God since, she said, superstitions are for poor and ignorant people, not rich and clever countries like the United States. A colleague recently told me that the issue with religion is that it always wants you to look outside China. Some look to Mecca or to Rome, some look to the sky, some look to the Buddha, but none of them look to China. China must be made better, the colleague said, and that cannot happen with people looking outside of China for help.

Still, if trends continue, China will have the largest Christian community in the world by 2030, an ironic feat in a country ruled by a party that is fundamentally atheist in nature. This reality shapes discussions in Rome as well as Beijing, and any future agreement between the two sides will shape the opinions that Chinese citizens, religious and otherwise, have toward the church. Any deal that makes the lives of Catholics in China better will be much welcomed, but we also need to be concerned that what is good for Beijing may not align with what is good for the faith community in China. 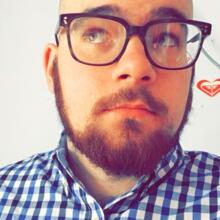 Michael Ryan has a master’s in sociology from the New School for Social Research. He is currently living and working in northern China.

This is a well-balanced article nicely delineating both the hopes and pitfalls in dealing with the extremely powerful leadership of modern China. Well done!