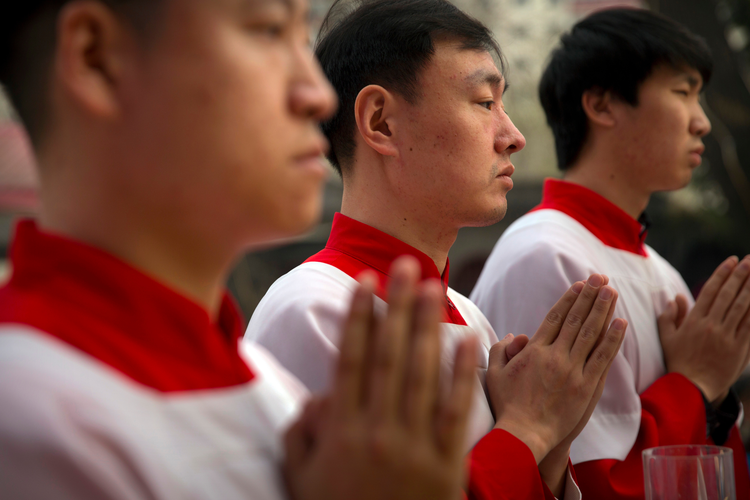 In this March 31, 2018, file photo, Chinese acolytes pray during a Holy Saturday Mass on the evening before Easter at the Cathedral of the Immaculate Conception, a government-sanctioned Catholic church in Beijing. (AP Photo/Mark Schiefelbein, File)

Christian churches in a province with the largest Christian population in China have been ordered by the authorities to bar children from attending services amid an escalating crackdown on religious freedom. In recent months, children have been expelled from an Easter Mass, church-run kindergartens have been closed and churches and crosses have been demolished.

According to a widely circulated notice issued by the state-backed Henan provincial Patriotic Catholic Association and Henan provincial Catholic Administration Commission dated April 8, churches must stop congregants from bringing their children to Mass and cease hosting retreats and training activities for children. Anyone disobeying, it warned, would be stripped of their positions and have their church closed.

Children have been expelled from an Easter Mass and churches and crosses have been demolished.

It also carried a stern warning: “In the past this was mainly a matter of propaganda and education, but now this is the red line, the high-pressure line. Do not disregard this.”

The central province of Henan is estimated to have a Christian population of several million—including roughly 300,000 Catholics. Henan also has deep Catholic roots; starting in 1613, Italian Jesuit missionaries Giulio Aleni and Lazzaro Cattaneo and French Jesuit missionary Nicolas Trigault began arriving in Kaifeng, then a metropolitan city in Henan.

A Catholic who requested anonymity told Ucanews.com, an independent Catholic news service in Asia, that officials from the religious affairs bureaus in Henan went to the North Church of the Zhengzhou diocese on Easter Sunday and ordered all the children to leave the Mass. When America enquired about the incident by phone on April 24, a staff member at the Huiji religious affairs bureau hung up.

Ucanews.com also reported that a Catholic kindergarten in the Anyang Diocese had been raided twice, and afterward its entrance was sealed with welded metal bars. In the Shangqiu and Anyang dioceses, local officials have been standing at church entrances to block children from entering, the report said.

Henan is estimated to have a Christian population of several million—including roughly 300,000 Catholics.

Two primary schools in Henan issued open letters to parents urging them to keep their children away from religious venues and to refrain from participating in religious activities.

“No one may use religion to disrupt social order, harm citizens or impede the national education system,” the letter said, quoting the national constitution, regulations on religious affairs and laws on education and the protection of children, although none of these directly forbid children from participating in religion.

“Let children stay away from religion,” it said, noting that developing minds were prone to the dangers of “illegal religious activities and religious extremism” and that keeping children out of religious venues was a “guarantee of a bright future.” Ucanews.com added that parents were required to sign a letter, provide their children’s names and return the letter to the schools.

Experts on Christianity in China say the Chinese Communist Party sees young people turning to religion as an alarming trend, particularly in Henan, where there has been rapid growth in recent years.

Experts on Christianity in China say the Chinese Communist Party sees young people turning to religion as an alarming trend.

Ying Fuk Tsang, the director of the school of divinity at the Chinese University of Hong Kong, said the Communist Party saw the growth of Christianity as a threat to its rule. In official literature, he said, the party often regarded the spread of Christianity or Islam as a “fight over souls” or a “fight over the next generation.”

A study of the religious lives of university students in Beijing published in a mainland Chinese academic journal Science and Atheism in 2013 showed Christianity to be the religion that interested students most and the most active on campuses. It concluded there was a “religious fever” in society and “religious forces were infiltrating colleges.” With the support of “overseas religious forces,” it said, there was a rapid growth in Christianity among university students. It said Christian fellowships on campus mostly refused to succumb to the leadership of the state-backed churches and thus posed “a problem” in the government's administration of religious affairs.

“Minors turning to religion is seen as a threat toward the Communist Party's ideology,” Mr. Ying said. “And ideology is seen as an important element of national security.”

The Chinese government sees Christianity as part of a concerted effort by the West to threaten China’s values.

President Xi Jinping has repeatedly said that national security must be under “the absolute leadership of the Communist Party.” Mr. Xi has said that socialism’s “core values” and Chinese culture should guide religions in China and that people should “safeguard against the infiltration of Western ideology.” The Chinese government sees Christianity, along with foreign N.G.O.s and human rights activists, as part of a concerted effort by the West to threaten China’s values.

In August 2016, Wang Zuoan, the head of the State Administration of Religious Affairs, said in People's Daily, the Communist Party's mouthpiece, that “some western countries use ‘freedom of religion’ as a pretext to meddle in our internal affairs and use religions to infiltrate China and to foster their influence.... We will unswervingly resist it.”

Yang Fenggang, the director of the Center on Religion and Chinese Society at Purdue University, said a combination of “militant atheism” and nationalism is driving the latest crackdown on Christianity.

Whereas in the past “foreign religions” like Christianity and Islam were dealt with through soft measures such as admonishment and education campaigns, under President Xi’s rule, the authorities have seen it as imperative to employ heavy-handed tactics to suppress their growth, Mr. Yang said.

“This militant atheism sees religion as a subversive force that has to be dealt with through political means.”

“This militant atheism sees religion as a subversive force that has to be dealt with through political means, and so youngsters have to be blocked from going to church,” Mr. Yang said.

The use of the term “red line” in the notice to churches from the state-backed Henan Patriotic Catholic Association and Henan provincial Catholic Administration Commission indicates that churches are now seen as “hostile organizations” that authorities have to use strict punishment to deal with, he said.

Texas-based China Aid has also reported on the intensification of suppression of Catholic and Protestant Christians across Henan province since the start of April.

A report quoted unnamed Christians as saying that church crosses have been removed “on a large scale,” citing the example of the Jinzhuang Church in the Shangqiu Diocese, without specifying a date. Another Henan church, the state-sanctioned Sheng’en, or Holy Grace, church had its cross removed from its spire on Sept. 20 last year, according to various news reports, and the image of it set on fire caused outrage.

“I believe it will be a general direction for the Communist Party to cool the ‘religious fever.’”

According to the China Aid report, quoting anonymous Christian sources, during mid-April, a church in Gongyi city was forcibly demolished by the local government, and officials twice raided the Gaoqiangying Catholic Church in Hua county and confiscated religious artifacts. On April 17, local officials closed the Catholic church at Xin village in the Anyang diocese and removed its cross from the spire. On the same day, the government forcibly removed the church cross from the Beixishang Catholic church at New Jiaozuo District and confiscated children’s Bibles and books and took over the church’s accounts.

America tried to contact the Henan provincial Administration of Religious Affairs to verify these reports and to seek official comments, but a telephone inquiry hotline operator said its number had been “made confidential.”

Although religious experts believe that Henan’s recent measures were due, in part, to the arrival of a new provincial Communist Party chief in March and local officials’ eagerness to show their loyalty under President Xi’s tightened ideological control, they predicted there would be further suppression of churches throughout the country.

“I believe it will be a general direction for the Communist Party to cool the ‘religious fever’ and deal with problems such as house churches, communist party members, youngsters and university students turning to religion,” said Mr. Ying.

China had an estimated 58 million Protestants and nine million Catholics in 2010, according to the 2011 Report of Global Christianity by the Pew Research Center. Mr. Yang has projected that by 2030, the number of Protestants and Catholics could exceed 247 million, making it one of the largest Christian populations in the world.

The Chinese government is using digital technology to monitor every Chinese citizen and rate them on their loyalty to the government. Google "China Assigns Every Citizen A ‘Social Credit Score’ To Identify Who Is And Isn’t Trustworthy"

A new meaning to "Big Brother."

The same thing is happening in the United States. Just look at our universities and Kanye West for how this is playing out.

First, they came for

To Ms Wu and all of the editors and authors here. Do you not believe that they will eventually come for you once your political opponents are eliminated. We used to joke that "might makes right" was a thing of the past but here it is happening in the United States and one side of the political spectrum celebrates it.

Since Pope Francis is such a charismatic pastor, I would like to believe that a visit to China would benefit the Catholics of the nation who are being persecuted for courageously passing on the faith to the younger generation. Unfortunately, as the government is militancy atheistic, and views the practice of Christianity as being subversive, it's doubtful that the Pope could help secure the right to worship in a nation that in practice recognizes no such right.

I don’t think Catholics realize that the largest violent rebellion (20 million killed...compare to 9/11’s 4000 killed) in China’s history was caused by a Chinese Christian oddball with odd ideas in the middle of the 19th century which for communists was a special century in which Christian Europe invaded their land and thru the Opium wars simultaneously open the Chinese provinces to both missionaries and British opium...at the point of a gun. You cannot understand the communists if you hurry past the 19th century which I saw a Catholic writer do recently while giving a history of the Church in China. Leave out the 19th century invasions of China by Europe with France representing Catholicism in all imperialist treaties...and you’re sinfully covering up their century of humiliation by in part Catholic forces. Benedict XVI in his letter to China foolishly remarked that the “Church does not try to change governments”. That signalled Chinese communist intellectuals that Benedict was either a liar or was unread in the 19th century in which the Catholic rep, France, repeatedly sacked her emperor’s palace.

This article also appeared in print, under the headline “Children banned from Mass in China's Henan Province ,” in the May 14, 2018, issue.