What the woman of Roe v. Wade and the woman at the well have in common 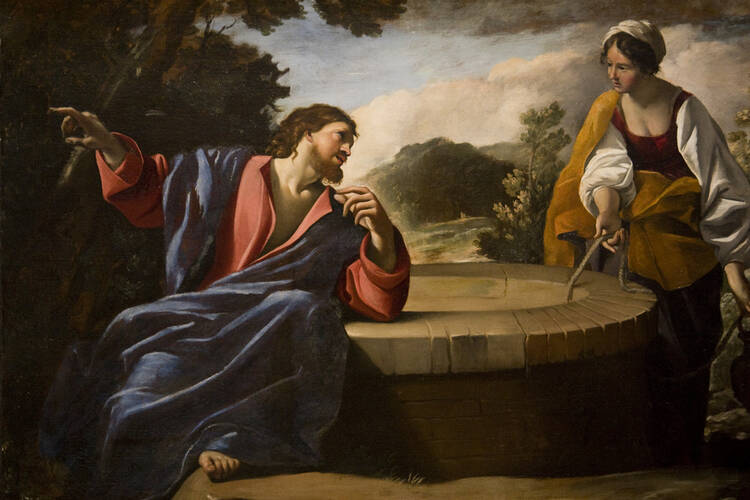 St. Augustine suggested that the Samaritan woman did not simply stumble upon Jesus, though that’s what she might have supposed. He wrote that Jesus looked at her, saw that she thirsted for much more than water and deliberately engaged her. “The woman was carrying a pail for drawing water. She was astonished that a Jew should ask her for a drink of water, a thing that Jews would not do. But the one who was asking for a drink of water was thirsting for her faith.”

The Gospels teach more than history. They demonstrate discipleship. Their stories teach us what it means to follow Jesus. The Samaritan woman at the well is a hard lesson for many Christians, a very challenging one for Catholics: It asks us to recognize the spiritual thirst of our contemporaries. In our individualistic times, we prefer to preach, “You believe as you like, and please let me do the same.”

The Gospels teach more than history. They demonstrate discipleship.

That’s Americanism, not Christianity. The Christian looks at one who is spiritually thirsting and, having known salvation in Christ, wants to share that satisfaction. Indeed, if you have no desire to share your faith, you should honestly ask yourself: Do I really believe that my faith is the greatest gift that I have been given? Sharing the faith is not a fundamentally a question of proselytizing and debating. It is a sympathy, a compassion for those whose lives lack purpose.

Consider the story of Norma McCorvey. Her father left when she was 13; her mother was a violent alcoholic. Reform school represented the best years of her life, freeing her from a sexually abusive relative. Married at 16, she left the husband who assaulted her and put their baby up for adoption.

Yet Norma’s life didn’t improve. No more marriages but two more children, both put up for adoption.

The third pregnancy gained great fame, because NARAL, the National Abortion Rights Action League, needed a plaintiff who was poor, someone without the means to obtain a foreign abortion. That’s how Norma McCorvey became the Jane Roe of Roe v. Wade, the Supreme Court decision that found a right to abortion in the constitutional protection of privacy. Norma signed the affidavit, though the baby was born and adopted before the case ever came to the court.

Jane Roe was NARAL’s cause célèbre, but Norma McCorvey never became its icon.

Jane Roe was NARAL’s cause célèbre, but Norma McCorvey never became its icon. Although she worked for years in a Dallas abortion clinic, the unlettered alcoholic and addict had little in common with the wealthy, college educated women who made up its ranks. They shunned her, even the lawyer who took her case and gained such fame.

The irony is who didn’t shun her. For several years, until liberal lawyers destroyed it, Norma’s abortion clinic shared an office wall with Operation Rescue, which was run by a bartender-turned-Christian named Flip Benham. In her memoir, Won by Love (1998), Norma wrote:

Flip has a Bat Masterson kind of arrogance and walks with the swagger of a riverboat gambler. But even back then, when he was my worst enemy, I could see a gentleness to his toughness, and something drew me to him (6).

He greeted “Miss Norma” every day, with a cheerfulness that grated. Yet…

Slowly, Norma realized that Flip had never hated her. Her demons were her own: self-loathing and the repressed horror of her work at the clinic. Almost against her will, she began to admire the way that Flip Benham and “the Christians” next door suffered so many legal and physical assaults as they fought against abortion. Norma McCorvey also insisted that she never felt manipulated by them, as she did the leaders of the abortion rights movement. She was “their woman at the well.” They could see that she thirsted for living water.

[T]hey never shoved anything down my throat. They simply passed along a cup of refreshing spiritual water, confident that I was thirsty and that I would take a drink whenever I was in a mood where I could receive it—which I occasionally did (49).

The other person who could see the thirst in Norma was Emily, the 7-year-old daughter of an Operation Rescue worker. One day, an abortion clinic employee deliberately tripped Emily and her sister, who were playing on the sidewalk outside both offices. Norma came to their rescue.

“Well, hello there, sugars. I’m Miss Norma. I work here at the clinic. I’m one of the counselors, so you’ll probably see me out here a lot. I like little kids, and I don’t like anybody mistreating them.”

“Then why are you letting the little ones die inside?” Emily asked.

I never answered her. I couldn’t. This little girl was the only person in the world who could have gotten away with saying something like that to me. Instead of spewing my usual obscenities in her face, I turned and walked inside the clinic without saying another word (54).

But Emily came back the next day and hugged Norma. She and her sister then came regularly to the clinic to visit her in its front offices. Emily kept asking “Miss Norma” to join them for church. She finally did, after the shock of learning that Emily had almost been aborted before her mother Rhonda became a Christian. That is what led to Norma McCorvey’s baptism and her rejection of abortion rights.

Christ comes among us as God’s compassion, God’s loving decision to suffer with us. To be a Christian is to live a life of compassion: for the poor, the sick, the young, the elderly, the unborn, those in need and, most especially, those so deprived of God that they no longer know what a blessed life is. We show respect to the spiritually thirsty by taking their opinions and insights seriously. But respect does not mean that we ignore them or their need for spiritual fulfillment. That would drain our Christianity of true compassion.

He asks for a drink, and he promises a drink. He is in need, as one hoping to receive, yet he is rich, as one about to satisfy the thirst of others. He says: If you knew the gift of God. The gift of God is the Holy Spirit. But he is still using veiled language as he speaks to the woman and gradually enters into her heart. Or is he already teaching her? What could be more gentle and kind than the encouragement he gives? If you knew the gift of God, and who it is that is saying to you, “Give me a drink”, perhaps you might ask and he would give you living water.

What is this water that he will give if not the water spoken of in Scripture: With you is the fountain of life? How can those feel thirst who will drink deeply from the abundance in your house?

The Gospels teach more than history. They demonstrate discipleship. Having pondered our Lord at the well, go, and do the same.

Terrance W. Klein is a priest serving in the Diocese of Dodge City and author of Vanity Faith.

I think it's incredible that you have anything good to say about Operation Rescue. They have incited murder and bombings. Flip Benham has opposed hate crime legislation, has harassed mosques, and he was found guilty of stalking a clinic doctor. Yeah, he's just like Jesus.

Thank you, Father Klein for sharing and reflecting upon this moving story of Norma McCorvey. I love your insight that "Sharing the faith is not fundamentally a question of proselytizing and debating. It is a sympathy, a compassion for those whose lives lack purpose."

Terrific essay Father Klein! I usually have a lot to say on everything, but briefly I offer the following. The heart believes what the mind knows. The mind knows that the killing of the not-yet-born is wrong and the heart believes this as true. Abortion then is an attack on truth, a "heart attack" damaging to the heart that has led to the killing of multimillion of unborn babies, at every developmental stage calling it "righteous," a woman's "right." Norma drank that "water" at the well and in a word, she got "WELL!" Now she teaches all who care to listen, women and men.