After deadly van attack, Toronto is still looking for answers 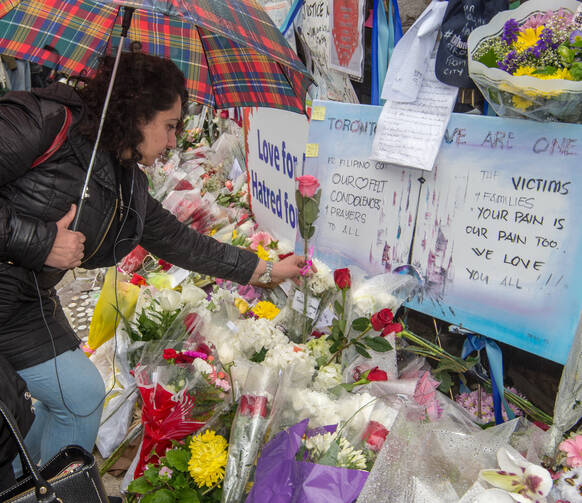 A woman places a flower at a makeshift memorial on April 25 near the Toronto sidewalk where 10 people were killed on April 23 after a van ran into them. (CNS photo/Michael Swan, The Catholic Register)

Details are still emerging about Alek Minassian, the 25-year-old man charged with 10 counts of first-degree murder and 13 counts of attempted murder after driving a van into pedestrians on Toronto’s Yonge Street on April 23. Mr. Minassian was arrested following the attack, after claiming to have a gun and telling a police officer to shoot him. As the city mourns, investigators and journalists are trying to make sense of the event.

Based on a Facebook post Mr. Minassian wrote before the attack, misogyny and sexual frustration may have been motivations. Though Facebook confirmed its authenticity, the post was removed after the attack. The post referenced the internet message board 4chan and Elliot Rodger, who killed six people and injured 14 in 2014 after making a video raging against women and his status as what has become known as an “incel,” someone who is “involuntarily celibate.” Mr. Minassian referred to the “Incel Rebellion” in his post, and most of the victims in his attack were women, though police say it is unclear if these victims were intentionally targeted.

Reporters have interviewed peers, classmates and neighbors who described Mr. Minassian as “socially awkward.” In a 2009 article in the Richmond Hill Liberal, Mr. Minassian’s mother said she had a son with Asperger syndrome, a form of autism, but she did not name the son.

Suggesting that people who struggle with their mental health are likely to be violent is dangerous, especially when people with disabilities are more likely to be the victims of violence than perpetrators.

Speculation about Mr. Minassian’s mental health has been included in much of the reporting of the incident. Mental health advocates say that can be misleading. “Focusing on tics and so on, on his body [being] out of control—there’s no comment on it, but the implication seems to be that of course he would drive a van out of control,” says Jordan Balint, a doctoral student at Emmanuel College in Toronto who researches disability and theology.

Mr. Balint says he sees implicit biases against people with disabilities in the reporting on Mr. Minassian, reflecting and reinforcing wider tendencies in society to marginalize those who do not appear “normal.” Suggesting that people who struggle with their mental health are likely to be violent is dangerous, Mr. Balint says, especially when people with disabilities are more likely to be the victims of violence than perpetrators.

In comments to the Toronto Star, Margaret Spoelstra, executive director of Autism Ontario, agrees. “Autism is not the reason someone gets behind the wheel of a van and plows through a crowd of people,” she said, adding, “diagnostic criteria for autism does not include violent behavior.”

According to the American Psychiatric Association’s latest Diagnostic and Statistical Manual, Asperger syndrome falls under the category of autism spectrum disorder. No link between autism and violence has been established in studies of the condition.

Mental health advocates regularly speak out following killings that grip media attention. When Nikolas Cruz, the gunman in the recent shooting at a high school in Parkland, Fla., was reported to have a form of autism, groups like Autism Speaks emphasized that there is no statistical link between autism and violent crime and that “speculation and misinformation about autism and other neurodevelopmental disabilities have hurtful and lasting consequences.” The same kind of speculation has occurred after other violent crimes, as in the case of Adam Lanza, the gunman in the 2012 Sandy Hook Elementary School shooting in Connecticut.

“Journalists moved too quickly to causes like mental illness. The speed with which that happens doesn’t help us think through what’s going on.”

Mr. Balint says it is too early to determine all the factors that propelled Mr. Minassian to his terrible act in Toronto. He says it is clear that “there is hate” online and in the rest of society, “and people develop that over time, I think especially in toxic online communities like 4chan.” But, he adds, “journalists the day after moved too quickly to causes like mental illness. The speed with which that happens doesn’t help us think through what’s going on.”

The attack on pedestrians in Toronto occurred just over a year after Alexandre Bissonnette shot and killed six men and injured 19 at a mosque in Quebec. Mr. Bissonnette was known for far-right views, including a hatred of immigrants and feminism, and was, like Mr. Minassian, influenced by far-right internet communities and personalities. Responding to a rise in far-right groups in Canada, including those online, Prime Minister Justin Trudeau recently committed $23 million (CAD) over two years to multicultural programs and integration programs for immigrants.

In a front-page column on April 23 in the Toronto Star, Rosie DiManno writes, “Maddened or mesmerized or mentally ill. And how can you even sift the difference anymore?” Mr. Balint says seeing that piece in his hometown newspaper was troubling, adding, “I don’t want to equate those [terms] at all or even connect them to going on a killing spree.” Journalists should examine their prejudices, Mr. Balint says; otherwise they risk further marginalizing an already marginalized community.

“Churches should keep trying to become communities, where people are actually friends with each other, care about each other beyond a handshake, passing the peace,” says Mr. Balint.

“If we really do think everybody belongs, many of us ought to have different friends than we currently do.”