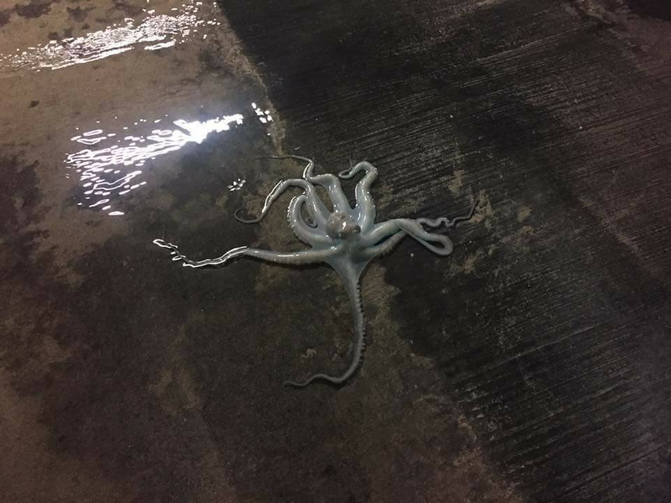 It has become a slimy poster boy—make that a poster mollusk—of global sea-level rise. Last November, as another king tide flooded Miami Beach, an octopus was found floating along an inundated parking garage floor.

The startling octopod had come up from Biscayne Bay and through the garage’s drains. Those were originally set above Miami Beach’s high-water mark, but today they're often among many submerged sluices on the iconic South Florida island city. The octopus video went viral, of course, one of the funniest and scariest reminders yet that rising seas due to global warming have rendered the coastal high-water marks more obsolete by the day.

That is especially true in the Miami area, which every media report on sea-level rise seems to profile as ground zero for deluge doom. Scientists estimate our oceans will rise between three and six feet by the end of this century. That directly threatens as many as 13 million coastal-dwelling people in the United States, and the largest concentration of them is in South Florida, where as many as 1.5 million residents could feel the tide lapping at their doorsteps.

It has become a slimy poster boy—make that a poster mollusk—of global sea-level rise.

The dangers transcend drenched living rooms, of course. Rising, encroaching salt water can contaminate aquifers and corrode infrastructure. Pope Francis weighed in on the hazards in his 2015 encyclical “Laudato Si’.” He warned that a “rise in the sea level…can create extremely serious situations, if we consider that a quarter of the world’s population lives on the coast or nearby, and that the majority of our megacities are situated in coastal areas” (24).

The question is how to confront it—particularly since, in the Age of Trump, the United States does not look as serious about doing its part to mitigate global warming. Not surprisingly, some of the more aggressive ideas are emerging in Miami and especially the separate city of Miami Beach, where sea-level-rise-related phenomena are undeniable. The frequency in the kind of tidal flooding that ushered in the octopus, for example, has increased 400 percent there over the past decade, according to a University of Miami study.

Perhaps the most sought after solution is elevation—raising roads, sea walls and homes and buildings or erecting new ones higher above ground—to counter the warming, creeping sea.

One prominent example is the billion-dollar Brickell City Centre, a nine-acre retail, office and restaurant complex under construction near downtown Miami that is set higher than the surrounding floodplain. Miami Beach this year is also embarking on a $100 million project to raise roads in the island’s midsection by two feet or more, complementing that lift with more advanced water pumps and sewer links. It is planned to be the city’s debut of a wider, half-billion-dollar effort to combat rising and surging sea water.

The problem, however, is what to do with all the private Miami Beach properties that will now be sitting lower than all the loftier public infrastructure. The answer may well be to raise them too.

Is statehood a way out of Puerto Rico’s fiscal crisis?
Tim Padgett

Rum's Renaissance: Why rum is having its Cognac moment
Tim Padgett

At a recent Miami Beach gathering of the Miami Design Preservation League, one consultant declared, “We have to adapt these buildings…or let go of them and build new [ones].” Raising a house or building by a few feet now—even though it could run $100,000 or more—is cheaper than tearing down a seawater-rotted structure and rebuilding it later. A big factor will be whether federal, state and local governments can come up with funding mechanisms to help defray the costs.

Either way, Miami’s Big Lift is not exactly a new idea. It follows and may revive a centuries-long tradition in the low-lying Caribbean and South Florida regions, where keeping above water has always been a challenge. Thatched-roof stilt houses were (and in many areas still are) a fixture of the indigenous Caribbean. Venezuela, in fact, got its name from Spanish conquistadors who came upon the stilt houses of the Guajiro Indians in Lake Maracaibo and dubbed the place “Little Venice.”

The Spanish themselves dotted Florida’s coast with stilt shelters. In Miami, the stilt houses of Biscayne Bay—known as Stiltsville—have assumed historic landmark status. So have the stilted “hunt camps” due west in the Everglades, which are often carpeted, air-conditioned retreats for self-described “swamp rats” who commute there by airboats.

Once considered quaint reminders of Florida’s past, those structures may now be a model for its climate-altered future.

Real change could never take place under such an onerous agreement.

China is the world’s biggest spender on clean energy.

I notice there is an assumption that there will be some federal funds to bail Miami out of its problem. I don't think so. The official policy of the federal government is climate change denial. I can't imagine Congress funding a remedy for a Chinese hoax.

This article also appeared in print, under the headline “As sea waters rise, Miami begins 'stilted' development,” in the July 10, 2017, issue.