The elderly and disabled were left behind in Hurricane Irma. What will happen next time? 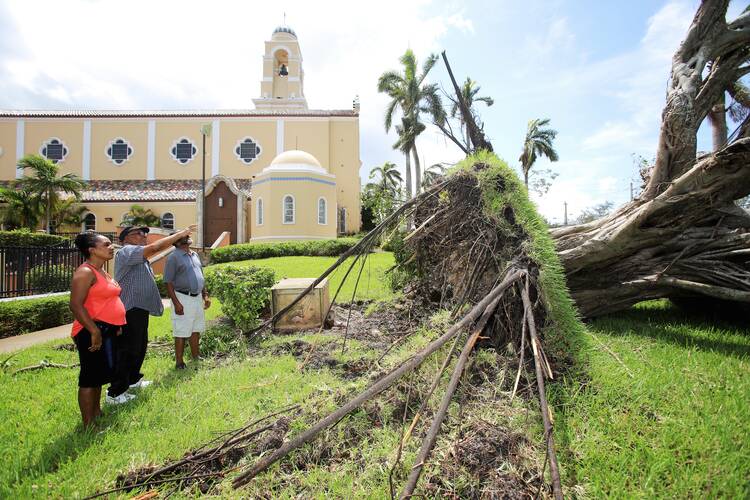 Parishioners point at a fallen tree uprooted on the grounds of St. Mary Cathedral in Miami after the passing of Hurricane Irma in September. (CNS photo/Marlene Quaroni, Florida Catholic newspaper)

As Hurricane Irma churned toward Miami in September, Gloria Guity did what she had been instructed to do: She evacuated.

State and local officials had been on TV urging South Florida residents to get out fast. Days before making landfall in Florida, Irma pounded the Caribbean with winds of 180 mph, becoming the strongest Atlantic hurricane ever recorded outside the Gulf of Mexico and Caribbean.

But evacuation was a significant challenge for Ms. Guity, who is 76 and has two adult children with mental and physical disabilities due to cerebral palsy. Her daughter Nelly, 38, relies on a walker; her son José, 32, uses a wheelchair. Normally, they have a home health aide to assist with daily tasks.

But as Irma barreled toward Florida, the three found themselves at a hurricane shelter that lacked not only medical supervision, but cots. They—along with hundreds of other elderly, disabled and low-income people—suffered as the storm exposed serious flaws in plans for hurricane evacuations.

“Here is better than where we were,” Ms. Guity said in Spanish, at that time waiting out the storm at a cafeteria table in a high school-turned-hurricane shelter. “We went to five other sites, and they didn’t have space for us.”

Staff at Miami Edison Senior High School put the family next to the women’s restroom to make it easier for Ms. Guity to take Nelly and José there. For four days, the 76-year-old mother was the sole caregiver for her adult children.

According to Miami-Dade County’s comprehensive emergency management plan, Miami Edison Senior High School was a medical evacuation center, meaning it should have had medical personnel, bedding and supplies to support 500 patients and caregivers.

It remains to be seen whether new efforts to address vulnerabilities faced by low-income, disabled and elderly people will result in meaningful changes.

But after the storm, county emergency management staff acknowledged that Miami Edison opened as a general population hurricane shelter—shelters that did not provide bedding or medical care other than basic first aid.

So Ms. Guity and Nelly slept sitting up, and José on an inflatable mattress the family had brought with it. They watched as shelter volunteers with limited medical experience tried to help an elderly woman who had forgotten how to contact her family and a mentally ill man who attempted suicide by overdosing on pills. (Shelter staff called rescue workers and the man survived.)

The county has an emergency evacuation assistance program to provide elderly and disabled residents with transportation to and from shelters equipped for their medical needs. But it requires pre-registration, and many people who would have benefitted—including the Guitys—said they were unaware of the program’s existence.

“People need to get pre-registered so we can understand how to use our limited assets to meet the needs of the population,” said Curt Sommerhoff, Miami-Dade’s emergency management director. “The key thing is being part of the program.”

Mr. Sommerhoff said the county tries to spread the word about the evacuation assistance program through home health care providers and the Florida Department of Health branch in Miami-Dade.

The county also struggled to better spread the word on shelter openings, both to residents and internally. The majority of shelter sites were announced publicly less than 48 hours before Irma made landfall. At some sites, evacuees arrived before volunteers and waited in line for hours to get in, then had to be bussed elsewhere as shelters reached capacity.

"Somebody released the list of shelters before they were ready to open, and that’s what caused people to stand outside in line," Miami-Dade County Mayor Carlos Gimenez said at an Oct. 10 county debrief meeting. "There are some things we need to clarify in the future."

For some evacuees, miscommunications and delays within the county’s emergency evacuation bus system made it exceptionally hard to get to shelters in the first place.

“That would be the most imperative change, to actually have a bus come pick up the people,” said Patricia Lynch, a single mother who evacuated with her now-5-year-old son, Xavi. Ms. Lynch does not have a car and frequently experiences the delays that plague regular public buses in Miami-Dade; two days before Irma was expected to make landfall in South Florida, she called the county helpline and was told the nearest evacuation bus stop was three miles from her apartment.

“I kept questioning, I said, ‘Really? That’s really far,’” Ms. Lynch said. She said she was told regular bus service had stopped. So she and Xavi packed clothes, food, important documents and a few toys into a grocery caddy and walked the three miles as darkness fell and the outer bands of the storm rolled in.

Ultimately a concerned driver stopped and called police, who helped transport Ms. Lynch and Xavi to a shelter.

“Had the police not come, who knows what we would’ve done?” she said. “I started getting myself mentally ready to walk back.”

For this Jesuit, Hurricane Irma brings back memories of a childhood in Florida
Edward W. Schmidt, S.J.

In addition to examining problems with emergency shelters and evacuation transportation, the county is participating in a Rockefeller Foundation-funded program to help address chronic stresses that complicated preparations for Irma and its aftermath. Officials hope the initiative will help resolve some of the main day-to-day challenges—high housing costs, poor public transit access and low wages—that made it difficult for some residents to stock up on supplies or evacuate.

“By addressing some of those underlying stresses, we can be more resilient, more able to bounce back,” said Jane Gilbert, chief resilience officer for the city of Miami, which is partnering with the county in the program.

But it remains to be seen whether new efforts to address vulnerabilities faced by low-income, disabled and elderly people will result in meaningful changes to the county evacuation system.

And even if evacuation shelters and transportation are improved, the changes may not be enough for people like Patricia Lynch, who suffered through Hurricane Irma.

“I don’t think I would evacuate again,” Ms. Lynch said. “In the future, I would probably just stay at home and wait it out. To go through that again would be, like, you do it one time and learn. And if you do it a second time and it happens again, it’s your fault. You didn’t learn.”

I very much sympathize with people who are elderly, disabled, poor or homeless when faced with the disaster that wracks a community. I'm 55, and don't fit into any of those categories of people. However, I do live in a nursing home because of brittle diabetes. As long as I read and exercise on a bike, my health is maintained. However, there are of course many elderly and disabled people in wheelchairs, (and some have dementia). I fear for their lives in case of a fire, or natural disaster. I could and certainly would assist the staff with evacuating residents who are incapable of assisting themselves. I consider this to something any decent follower of Jesus would do, although I'm certainly an imperfect Catholic.
I hope that our government at all levels serves the common good by properly funding emergency services, especially so that such workers can communicate better the resources available.