For this Jesuit, Hurricane Irma brings back memories of a childhood in Florida 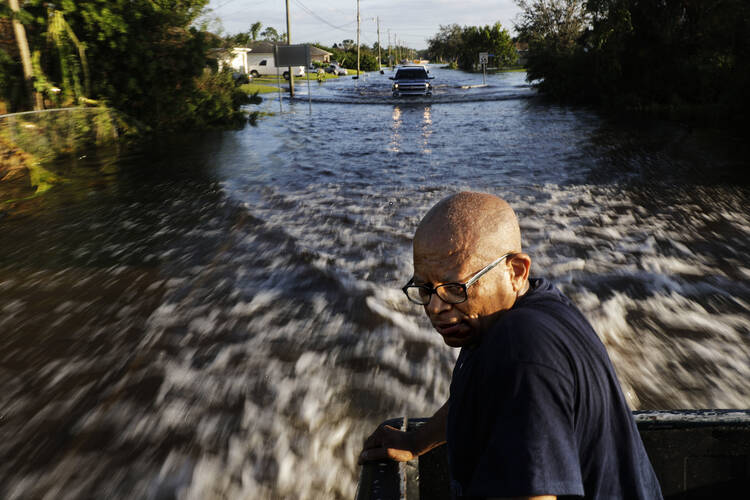 Jean Chatelier gets a ride from a passing motorist after walking through a flooded street from Hurricane Irma to retrieve his uniform from his house to return to work today at a supermarket in Fort Myers, Fla., Tuesday, Sept. 12, 2017 (AP Photo/David Goldman).

The news last night was all about Irma—wind and rain, surges and floods and high tides along the coast. The West Coast of Florida was being hit hard, and Tampa, Tampa Bay and St. Petersburg figured heavily in the reporting. Orlando merited mention because of the very real threats to Disney World. And suddenly I heard “Lakeland” as the center of the reporters’ interest. That really hit home.

When I was in grade school and high school, my father’s parents lived in Lakeland, and we made a couple of visits down there. Once my brother Phil and I went by train with my father’s aunt Nora, always known in the family as Aunt Nodie. From that trip I have a clear memory of the station in Orlando, built in the style of a Spanish mission, though with clearly marked washrooms for “Whites” and “Negroes.”

On some of the visits, my grandparents lived in town—turn right at the Publix store, not far from St. Joseph’s Catholic Church. At other times they lived out in the country, in the highlands. The drive out there included passing chain gangs of prisoners from the neighboring lockup. My grandparents’ home was on the estate of a wealthy business owner from Detroit, for whom my grandfather was the caretaker. The mansion was old, deep-South style, with columns and balconies. (It would have fit into “Gone with the Wind.”)

The hurricane was transformed from a distant catastrophe into a terrifying reality for me.

The caretaker rated a small home hidden nearby with a chicken coop out back. We gathered the eggs every day, and I remember my grandfather isolating a hen that was getting too familiar with a rooster. He also taught us to shoot a rifle, though I remember my aim was a little high. Instead of hitting the target, an orange, I hit the stem holding it onto the tree. It dropped unharmed. I also got introduced to water skiing at a nearby lake where a family of my grandparents’ friends lived. Fear of alligators outranked any fun on skis. From Lakeland we always made the drive to the Gulf, normally through Tampa and across the bay to Clearwater Beach near St. Petersburg.

The elderly and disabled were left behind in Hurricane Irma. What will happen next time?
Kate Stein

My grandparents had lived in a couple of places before settling in Florida. They were both from Iowa. My grandfather had worked on the Mississippi and later moved around finding work as a baker. My father was born in La Crosse, Wis., lived awhile in Mason City, Iowa, and graduated from Janesville (Wis.) High. From there he went to Marquette and to what is now Illinois Tech in Chicago.

With the mention of Lakeland in the news, the hurricane was transformed from a distant catastrophe into a terrifying reality for me. Though my grandparents are long gone from there, the place is immediate. The memories of drives and train rides are deep. The taste of Aunt Nodie’s great cooking lingers. Family time together, more evening television than we were used to, silent stretches of highway bring comfort. And now the hurt to this place where I experienced so much of what is good in young life makes objective reports very personal. To the people of Lakeland and to your neighbors too, my thanks, my prayers, my hopes for tomorrow.