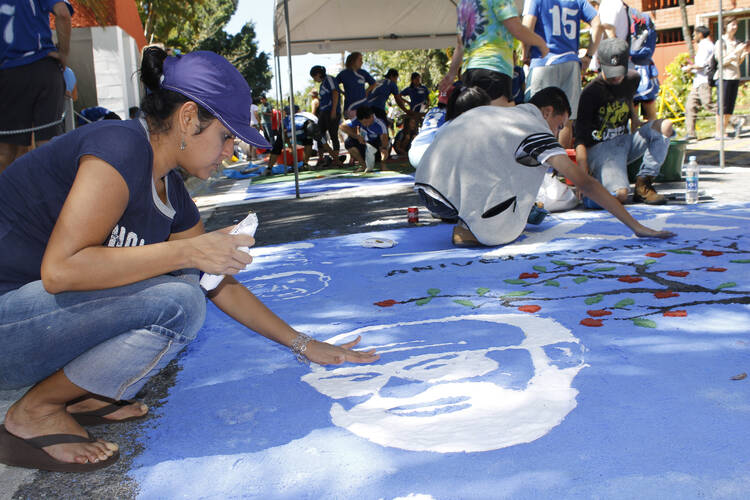 Ivette Escobar, a student at Central American University in San Salvador, helps finish a rug in honor of the victims in the 1989 murder of six Jesuits, their housekeeper and her daughter on the UCA campus, part of the 25th anniversary commemoration of the Jesuit martyrs in 2014. (CNS photo/Edgardo Ayala)

A court decision in El Salvador could mean the reopening of an official investigation into the 1989 massacre of six Jesuits, a staff member and her daughter at the University of Central America during the nation’s civil war. A prominent human rights attorney in the United States believes that the upcoming canonization of Blessed Oscar Romero in October has been a factor in the decision, encouraging a new urgency among Salvadorans to revisit—and resolve—the nation’s civil war–era crimes. Responding to a petition entered by the Institute of Human Rights of the University of Central America in November 2017, a judge in San Salvador ordered on April 17 that government prosecutors revive an investigation into the army raid at U.C.A. that had been suspended in 2000.

“The profile of this [U.C.A. massacre] is so much higher now” because of Romero and talk likewise of sainthood for Rutilio Grande—a Jesuit martyred in El Salvador in 1977—that Salvadoran government and society “need to figure this out,” said Carolyn Patty Blum. “It is not just going to go away.”

Ms. Blum is a senior research fellow at the Human Rights Center at the University of California Berkeley. At the Center for Justice and Accountability, also in Berkeley, where she formerly worked, Ms. Blum had for years pursued justice for the U.C.A. victims.

A human rights attorney in the United States believes that the upcoming canonization of Blessed Oscar Romero in October has been a factor in a decision to revisit the 1989 Jesuit massacre at the University of Central America.

It is not clear that this renewed investigation in El Salvador will mean that pursuit will finally come to an end, she said. A lot will depend on the political will of El Salvador’s public prosecutor to get to the bottom of the U.C.A. killings, she explained.

A new investigatory unit within El Salvador’s attorney general’s office has been empowered to look into historic crimes like the killings at U.C.A., the 1981 Mozote massacre, the assassination of Archbishop Romero and other infamous crimes of the war era. Ms. Blum reports that the small unit is attempting to “ramp up” its efforts now.

“The federal prosecutor’s will is 100 percent the name of the game here. There has to be people in the ministry of justice who are willing to take [the restored investigation] seriously,” she said. But will they pursue the evidence wherever it leads? Even if it heads into the office of former president Alfredo Cristiani?

All of the key members of the military high command implicated in the U.C.A. deaths still reside in El Salvador. Spanish prosecutors—five of the six Jesuits slain were Spanish citizens—have long sought their extradition without success. Though a 1993 amnesty which had protected them was thrown out by El Salvador’s Supreme Court in 2016, the retired military men retain local influence and powerful associates who can create obstacles to a vigorous investigation, according to Ms. Blum. “Those guys still have clout,” she said.

The Jesuit massacre—which occurred as El Salvador’s brutal civil war neared its end—shocked the global community. According to court testimony, elements of the notorious Atlacatl Battalion, an elite unit of the Salvadoran Army trained at the U.S. Army’s infamous School of the Americas, raided the campus with orders to kills its rector, Ignacio Ellacuría, and to leave no witnesses behind. The Jesuits, who had endorsed a negotiated end to the civil conflict, had long been suspected—erroneously—of collaborating with rebel forces. The orders were strictly followed.

A peace agreement ended the war in 1992, but the presumed masterminds of the assassinations, high up the Salvadoran military chain of command, have never been brought to justice. Nine soldiers involved in the summary executions were tried in 1991, but only two were convicted. They were released after serving 15 months when Salvadoran legislators passed the 1993 amnesty. That law barred prosecutions of human rights abuses that occurred during the 12 years of the civil war.

Human rights investigators in Spain and the United States kept the pursuit of the culpable alive, however, in the years following the amnesty. In 2017 Colonel Inocente Montano, El Salvador’s former vice minister of public security, was extradited from the United States to Spain, where he is currently being prosecuted for the slayings. The colonel had been living outside of Boston and in 2012 pleaded guilty to six counts of immigration fraud and perjury, offenses which precipitated his extradition.

In the aftermath of Mr. Montano’s extradition, the former military leaders implicated in the U.C.A. killings are reluctant to leave El Salvador, fearful of an Interpol warrant that could land them in Spain. “The noose is definitely tightening around these guys,” Ms. Blum said.

Though a successful prosecution is far from guaranteed, the revived investigation is still good news, she said. “It’s taken a really long time to get to this place,” said Ms. Blum.

Noting the judicial progress outside the country in Spain and the United States, she said, “All of these cases should, of course, be heard in El Salvador; the memories are there; the witnesses are there; that’s where the crimes occurred.”

More than 75,000 people are believed to have died during the civil war, which raged between the 1980-1992. The conflict left 8,000 missing and a million displaced. A U.N. truth commission established in 1992 found that 95 percent of the human rights abuses recorded during the conflict were committed by Salvadoran military against civilians, primarily in rural communities, who had been suspected of supporting leftist guerrillas.

What a horrible time all because of the nature of Liberation Theology. I wonder who or what should be standing trial.