Was the British Government right to attack Syria without Parliament’s approval? 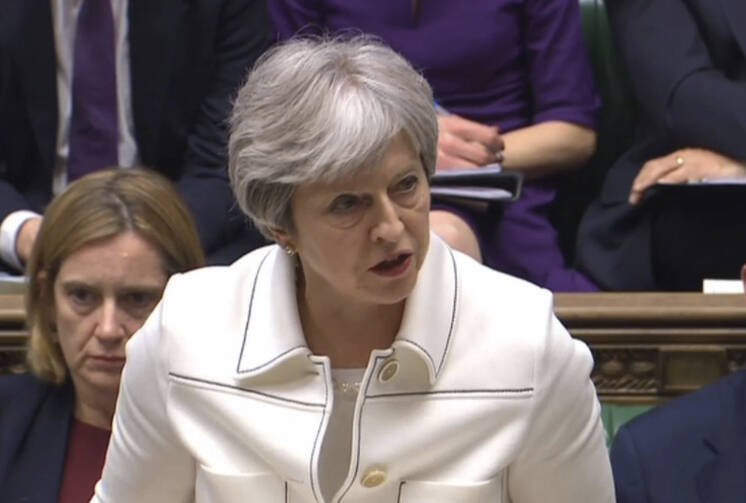 Britain's Prime Minister Theresa May makes a statement in the House of Commons on April 16 regarding her decision to join air strikes against Syria. (PA via AP)

Warlike noises are emanating from the British cabinet, echoing those from Washington and Paris, and not everyone is happy about it. Last weekend four Royal Air Force fighter jets joined American and French forces in a strike against chemical weapons facilities controlled by Syrian President Bashar al-Assad. What has caused an angry and bitter debate is not only the action itself but the absence of Parliament’s approval.

The launch order came before Parliament, currently still in the Easter recess, had the opportunity to debate it. Starting with a press conference given by Prime Minister Theresa May herself, her government has tried to justify the decision. The media has been told that cabinet backing for the strikes was unanimous, but for many, that consent was insufficient.

This inquiry over the role of Parliament is distinct from the debate over the rights and wrongs of the attack. In 2013, Ms. May’s Tory predecessor, David Cameron, unsuccessfully tried to persuade Parliament to back his proposal to join a U.S. attack on the Assad regime in the wake of international dismay about its use of chemical weapons. Ms. May now stands accused by many, including opposition leader Jeremy Corbyn, of avoiding such an outcome by giving the launch order while Parliament was not in session.

Ms. May stands accused of avoiding debate by giving the launch order while Parliament was not in session.

Was the government wrong to do so? There is no constitutional bar to the prime minister taking the country into a war, despite the widely held view that such action requires a mandate from the House of Commons. In 1939, Britain entered World War II without advance authorization from Parliament, using a mechanism known as the royal prerogative.

In the past, monarchs could and would declare war without appeal to any other authority. In more recent times that prerogative has passed to the government and specifically to the prime minister. A 2017 briefing paper from the House of Commons Library notes:“The prerogative enables Ministers, among many other things, to deploy the armed forces, make and unmake international treaties and to grant honours. In modern times, Government Ministers exercise the majority of the prerogative powers either in their own right or through the advice they provide to the Queen which she is bound constitutionally to follow.”

But Tony Blair twice turned to Parliament for consent before joining the U.S.-led invasion of Iraq in 2003, and Mr. Cameron felt obliged to do the same when he wished to intervene in Syria five years ago. Britain has an unwritten Constitution that recognizes precedent and convention; the May administration could be said to defy what has recently become convention. There is no War Powers Act akin to that in the United States, but Mr. Corbyn and others are urging that the United Kingdom adopt one.

There is no War Powers Act akin to that in the United States, but Mr. Corbyn and others are urging that the United Kingdom adopt one.

The royal prerogative was also invoked to trigger the start of Britain’s secession from the European Union, with the May government announcing that it would bypass Parliament and use the prerogative to trigger Article 50 of the Lisbon Treaty. But that action was successfully challenged by a private citizen, an investment manager named Gina Miller, leading the Supreme Court to rule that Parliament must vote on when the Brexit process can begin. (There is now debate over Parliament’s ability to amend any deal the May government reaches with Brussels over leaving the E.U.)

Unfortunately, Ms. Miller was vilified, online and in the media, in terms that were abusive, misogynistic and racist. Even the Supreme Court was not spared abuse—with one newspaper naming them “Enemies of the People” for forcing a Brexit vote in the House of Commons. A proposed action and the constitutional process governing the action were then, as now, conflated.

There has been plenty of heat about the decision to attack the Assad regime. It is possible to count Mr. Assad among the worst and vilest of history’s dictators, responsible for a gas attack on his own people, while opposing military attacks on Syria. To take a binary view is simplistic and dangerous. The logic of punitive bombing is questionable. To oppose even brutal violence with just more violence achieves nothing except, maybe, revenge.

Britain is still not at peace with the decision that Mr. Blair took over Iraq. He was accused of meekly following the U.S. president, and now, even though French President Emmanuel Macron appears to have been very influential in the decision to attack Damascus, some believe Ms. May has hewed too closely to the Trump line. Lots of people, including many of the faithful, continue to demand that other solutions be sought that do not include violence. At a time when it feels that the whole world is burning up with anger, the follower of Christ knows that there is always an alternative.

Well, the “plot developments” do not seem to favor the British position on this mess, as an MIT expert has now stepped forward and claimed the latest chemical weapons attack in Syria was staged, and so the response to the event by the U.S., the UK and France is irresponsible.

“A leading weapons academic has claimed that the Khan Sheikhoun nerve agent attack in Syria was staged, raising questions about who was responsible. Theodore Postol, a professor emeritus at MIT, issued a series of three reports in response to the White House's finding that Syrian President Bashar Al-Assad perpetrated the attack on 4 April.”