Cheering and jeering on the European mainland as Brexit doubts emerge

Cheering and jeering on the European mainland as Brexit doubts emerge 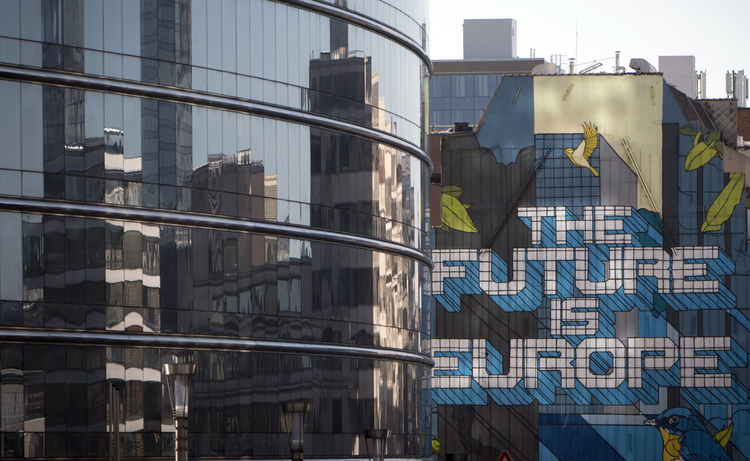 The glass front of a building which houses the translators of the European Commission in Brussels on March 20, 2018. (AP Photo/Virginia Mayo)

Just days after the “E.U. 27,” that is the post-Brexit European Union states, and the British government achieved a slightly more harmonious understanding on the next stages of Britain’s E.U. withdrawal, English football fans brought new shame on their nation.

The football hooligans, who like to call themselves “Ultras,” were in Amsterdam for an international match against the Netherlands, not in Germany, but that did not stop them from mimicking the Nazi salute and singing offensive ditties against the Germans. Ironically, this had been billed as a “friendly” match, something of a warm-up for this summer’s World Cup. It is far from the first time that chanting and goose-stepping England fans have clashed with police in the streets of Amsterdam. Here in the Netherlands’ biggest city, these so-called fans paraded like pack animals through narrow cobbled streets and across the expanse of Dam Square. Amsterdam has had its own headaches, of course, with a fascist minority of fans of the city’s team, Ajax.

Prime Minister Theresa May’s Conservative government’s relationship with continental Europe has been a degree more irenic lately than that enjoyed by her graceless and tattooed compatriots in their replica football shirts. The negotiated outcome of the latest stage of the lengthy negotiations over U.K. departure from the European Union brought slightly more smiles than grimaces.

A deal of sorts was agreed on for the neuralgic transition that has mired the talks and encouraged those, mainly from the Tory Right, pushing hard for a complete break with every aspect of European regulation. The government tried to spin this as a win, but it is a provisional deal with the E.U. 27 and is only 75 percent complete. The slightly forced smiles from both sides signaled that it was at least a jointly agreed deal, one that would allow Britain to retain membership in the customs union and single market until the end of 2020. But well before that, Britain will lose all influence on policy decisions.

Small victories may be the best that the careworn Ms. May can hope to achieve in these beleaguered days, embattled as she and her government are over Brexit. This little triumph was quickly ridiculed by the euroskeptic right, with accusations quickly flying that U.K. negotiators had acquiesced to far too many of the demands of the E.U. 27.

Ever-louder demands are emerging for a second Brexit referendum as it is increasingly suggested that the entire Brexit program could and should be reversed.

Simultaneously, from the other flank ever-louder demands are emerging for a second Brexit referendum as it is increasingly suggested that the entire Brexit program could and should be reversed and even abandoned. Remain campaigners from the June 2016 referendum are finding their voice again, counting on their growing sense that more Britons are realizing how disastrous removing themselves from the European Union will be.

Hovering behind whatever is left of Tory optimism on Brexit is the 21st-century version of the Irish Question. As predicted in these columns, the matter of the Irish Republic’s border with Northern Ireland is becoming fraught, and not even the most skillful negotiators have so far come up with a solution. In plain terms, when and if Britain leaves the European Union, it will share a land border with a state that has not, the Irish Republic.

Similarly, the possibility of Scottish independence has not dissipated, and there could be another border on the British mainland as a newly independent Scotland would quickly seek E.U. membership. For purposes of trade and security, there has to be some kind of customs monitoring at these potential new borders. The United Kingdom, in its new glorious isolation, would have to operate under different trade rules, although Britons have not been told what these will be.

No party in the north or south of Ireland wants a return to a hard border. Not many people on the neighboring larger island really understand this. The Democratic Unionist members of the Westminster Parliament, who are keeping Ms. May in power by providing her with the majority she failed to secure in the recent general election, will never countenance the slightest difference in governance between the Six Counties of Northern Ireland and the rest of the current United Kingdom.

The E.U. 27 negotiating team has proposed regulatory alignment for both sides of the border, a solution that looks sensible enough but which has infuriated the Unionists. For them, rage at the slightest whiff of a sell-out has been a default stance for decades.

The U.K. football fans who roam European cities looking for trouble have disfigured the beautiful game for many years. Ever more sophisticated reporting and observation of their activities has not fully eradicated the blight. Russia shares the problem; it is one of the biggest worries about the forthcoming World Cup to be hosted there.

Many of Russian fans are racist and homophobic. Nobody doubts that they are already relishing the arrival of foreign fans, especially the English. The populist and xenophobic attitudes that characterize such Russian groups are not that distant from some of the views expressed in the United Kingdom.

The bigotry and prejudice of these football thugs cannot characterize an entire nation, here or elsewhere, but they do connote a certain strand of English exceptionalism, expressed in ridiculous references to World War II and even to its former empire. Succumbing to such worst impulses has replaced for some people reasoned political debate, mirroring the rise of neo-fascism in many E.U. countries.

It bewilders many ordinary Europeans that the English way of supporting its national team seems to require such ugliness; not just flag-waving but actively seeking out violence and proudly expressing the worst of hateful and imperialist attitudes. Although new forms of fascism are undoubtedly on the rise across Europe, the majority of Europeans look askance at not only the football hooligans but at the possibility that sentiments similar to the ones they express might have driven the decision to leave the union.

It is, therefore, a relief, and not only to Prime Minister May, that our politicians have managed even these small bits of progress and agreement. For all their flaws and the many serious questions that remain far from resolved, this closely argued Brexit negotiation process tells us that what we need is not more hate but better politics; that is the means by which we avoid fighting each other over the issues that still divide us.