The Parkland students have been heard. Now is the time for action. 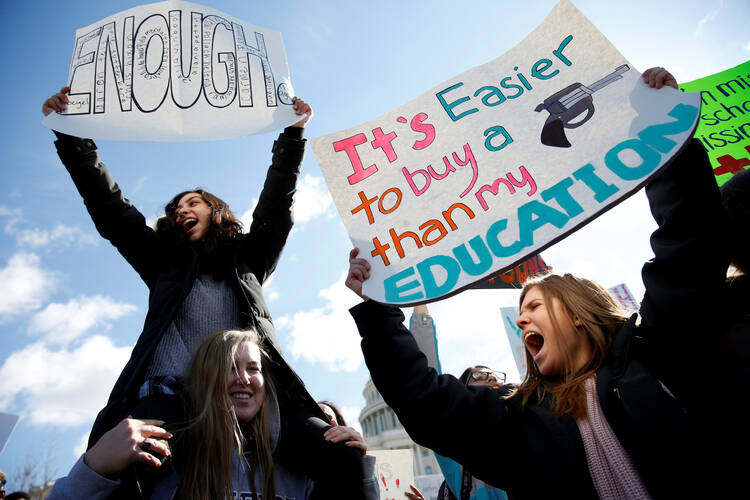 Students calling for stricter gun laws protest outside the U.S. Capitol in Washington during a school walkout March 14. Hundreds of thousands are expected to converge on the nation's capital March 24 for the March for Our Lives against gun violence. (CNS photo/Joshua Roberts, Reuters)

“There are many ways to silence young people and make them invisible,” Pope Francis said to thousands of young people gathered in Rome for Mass on Palm Sunday. “[There are] many ways to anesthetize them, to make them keep quiet, ask nothing, question nothing.” For decades, young survivors and witnesses of gun violence in schools, cities and homes have been invisible bystanders in the intractable debate over gun control. But no longer.

On March 24, student survivors of the shooting at Marjory Stoneman Douglas High School in Parkland, Fla., led the March for Our Lives in Washington, D.C., and over one million people marched in allied events across the country.

That young people are stepping up to close the voter enthusiasm gap on the issue of guns is nothing if not small-d democratic.

Survivors of school shootings, accidents and gang violence, as well as those who had lost loved ones to suicide, were represented and given a platform. The March for Our Lives included demonstrators from across the political spectrum, including gun owners and supporters of the Second Amendment. A number of Catholic schools and parishes were represented at the march, making the case that gun control is a pro-life issue.

Five years ago, the editors of America called for a repeal of the Second Amendment, a position that has gained high-profile supporters on both sides of the aisle, most recently the former Supreme Court Justice John Paul Stevens. The demands of the organizers of the March for Our Lives were more modest measures that have the support of the majority of Americans, including a ban on assault-style weapons and high-capacity magazines and universal background checks for gun sales. Parkland students have also called for more funds for school security and for mental health research and services.

Critics of these protests have characterized the young voices of the movement as opportunistic, even demagogic. But students using the media and impassioned testimonies to mobilize voters and influence lawmakers are not circumventing democracy. They are doing exactly what the National Rifle Association has done for years—to great success. That young people are stepping up to close the voter enthusiasm gap on the issue of guns is nothing if not small-d democratic. Their voices have been heard. Now is the time for action from lawmakers.