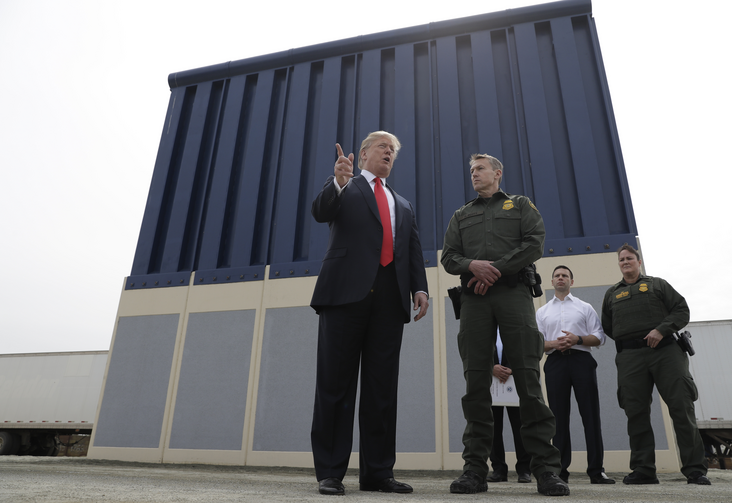 President Donald Trump inspected eight border wall prototypes yesterday in southern California, saying that without “a wall system, you’re not going to have a country.”

“Drugs are pouring through California,” he said, adding that those who enter the United States illegally are “like professional climbers.” Nevertheless, he said, “When we put up a real wall, we’re going to stop 99 percent, maybe more.”

Building a “great border wall” was perhaps Mr. Trump’s most frequent campaign pledge in 2016, and he has repeatedly insisted that Mexico will pay for it.

Trump: “When we put up a real wall, we’re going to stop 99 percent, maybe more.”

The head of the Diocese of San Diego, Bishop Robert McElroy, reacted to the president’s visit with a terse statement: “It is a sad day for our country when we trade the majestic, hope-filled symbolism of the Statue of Liberty for an ineffective and grotesque wall which both displays and inflames the ethnic and cultural divisions that have long been the underside of our national history. Our faith is in the God who is the Father of us all, and who urges us to see Jesus himself in the immigrants and refugees who seek safety and freedom.”

Kevin Appleby, senior director of international immigration policy for the Center for Migration Studies in New York, also criticized the proposed wall, saying that it “is a symbol, but it also has harmful consequences on border communities and the migrants themselves.”

As the United States has built barriers on the Mexico border, it has simply redirected the flow of unauthorized entries to more remote areas of the desert, Mr. Appleby said. While Mr. Trump says the wall can stop illegal immigration, according to the Center for Migration Studies, the larger problem comes from people who enter the country legally and overstay their visas. Overstays account for about two-thirds of new undocumented immigrants, a pattern that began in 2007.

Visa overstays account for about two-thirds of new undocumented immigrants, a pattern that began in 2007.

“Economic and other factors are influencing migration across the border,” Mr. Appleby said in an interview with America. An enforcement-only approach will not stop the problem of illegal immigration, he said. “We need comprehensive reform.”

The U.S. bishops have been urging a comprehensive overhaul of the immigration system for more than 15 years. In 2003, bishops from the United States and Mexico issued a joint pastoral letter, “Strangers No Longer,” in which they outlined a Catholic approach to reform.

The bishops have recognized a sovereign nation’s right to regulate its border, but they argue enforcement should be targeted, proportional and humane. Reform, they say, must go beyond border security, and it should offer undocumented immigrants a pathway to legal status, maintain family-based immigration and develop a market-driven temporary worker program.

“It’s shameful that we insist on building walls that separate rather than construct bridges that connect,” said Pat Murphy, a Scalabrini priest, in response to Mr. Trump’s California visit. Father Murphy runs a center for migrants in Tijuana, Mexico, just south of San Diego.

“I wonder what message we are giving to the people of the world and especially the migrants who are forced to leave their homes in search of a better life,” he said. “There must be a better way because no wall, no matter how high, will change the reality of so many people forced to migrate—or simply die.”

Fear of ICE keeps some participants away from Encuentro gathering
J.D. Long-García

Investing in economic development in the countries sending migrants would do a lot more to stem illegal immigration, according to Mr. Appleby. Migrants, he said, would prefer to stay in their homes and support their families. As evidence, he noted that the number of undocumented immigrants from Mexico living in the United States dropped by 1 million between 2010 and 2016, thanks to Mexico’s improving economy. But the number of migrants from Central America, a region beset by violence, continues to escalate.

“The only sustainable solution to [illegal] migration is addressing the root causes of why people are compelled to leave their countries,” Mr. Appleby said. “The problem is that Washington doesn’t have the attention span to stick with the issue. It won’t be solved within an election cycle.”

Trump is a technology dullard in addition to all the other ways he's stupid. As the article attests, crossing the border is not the primary way people end up here illegally. But even if it were, a man-carrying drone could probably hop a score of people over the wall on a single charge. Or maybe use that high tech device called a ladder. Trump should go back to building silly golf courses and casinos. A silly man for silly jobs.

Why would you fault him for not having pointed out what he has pointed out repeatedly for years. And you might take note of the fact that border crossing is the prime means of criminals making illegal entry, the one matter even most more-enlightened-and-caring-than-thou Christians grudgingly concede is a bad thing in the immigration crisis.

His statements about immigration were not the focus of my comment. It's the folly of thinking a 13th century technology is a fix. A waste of money to justify the silly promises of a fool elected to the presidency who has always opened his mouth without any prior thought. The wall would be a waste of money because it won't work. Thank goodness. Who would harvest my cheap food?

Why would you fault him for not having pointed out what he has pointed out repeatedly for years.

It would be rewarding if this,and other journals a sites that seek to solve moral issues continue to explore the necessary option of the US and other wealthy nations' investing in poor nation from which refugees flee.