How Trump’s unpredictable style is causing existential anxiety in Africa 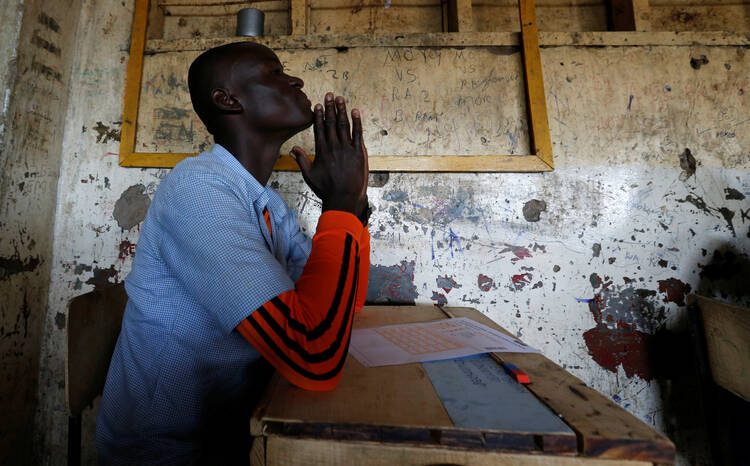 A student prays inside the classroom of a school in Nairobi, Kenya. (CNS photo/Thomas Mukoya, Reuters)

Unpredictability is perhaps the linchpin of President Trump’s negotiating style and social media plan. He brags about it, and his base appreciates it as a mark of authenticity. Yet as I traveled around East Africa, I found that his unpredictability and crass belittling of others is fostering an existential anxiety among those working with the poor.

This anxiety is pervasive. For example, all across the continent, many H.I.V./AIDS programs depend upon funding from the President’s Emergency Plan for AIDS Relief. Thus far, the Trump administration has not targeted Pepfar for budget cuts, but as I visited programs in East Africa, many asked whether the program is safe. When reports from a White House meeting on immigration reported that the president referred to Africa as a collection of “shithole countries,” it is easy to understand why HIV/AIDS clinic staff members are anxious. In addition, the budget plan released this week by the Trump administration does propose deep cuts to the budget of the international development agency USAID. The anxiety in Africa is not based in partisanship (Pepfar, after all, was started by Republican President George W. Bush); it is about a growing fear that the current president’s lack of understanding about Africa will destabilize their work.

Another contributor to the anxiety is the growing belief that the United States is abdicating its moral leadership on important global issues. The symbolism of Mr. Trump withdrawing from the Paris accord on climate change and questioning its fairness to the United States has made an impact in East Africa, where growing seasons are shrinking due to climate change. As I interviewed people worried about growing enough food, Mr. Trump declared the United States “open for business” at the World Economic Forum in Davos, Switzerland. This caused justifiable eye rolls from women religious in Ethiopia, who asked me, “Does he really think the United States is underdeveloped?”

There is a growing belief in Africa that the United States is abdicating its moral leadership on important global issues.

Yet disapproval of Mr. Trump is not universal. I was surprised to learn from a Nigerian Jesuit that many in Nigeria prayed for his election. Disappointed with the Obama administration, they believed he would provide more support in the fight against the terrorist group Boko Haram. But do they still support Mr. Trump, even after his derogatory comments about Nigeria as a nation of huts? The Jesuit answered that the wealthy pay little attention to Mr. Trump’s blustering, and members of the the elite assume it will not affect their ability to get visas to the United States. Yet many other nations did call in U.S. ambassadors to demand an explanation of the president’s comments about African nations. The racism inherent in his reported statements was both obvious and sadly familiar to them.

Ultimately, it always seems to come back to money. Rightly or wrongly, those with money often do not see themselves as included in Mr. Trump’s dismissiveness of the continent—even as Mr. Trump seems unaware that there is more to Africa than poverty.

In Nairobi, my friend Catherine Amenya, programs coordinator at the Hekima Institute for Peace Studies and International Relations, pointed out: “I don’t think Trump has any idea what it takes to get to the United States as a legal immigrant. The poor cannot access the visa lottery system; only the middle class and rich can.” That is, the poor and uneducated do not have access to the program that President Trump keeps insisting is letting in all the wrong people. In fact, applying to the diversity visa lottery program requires hundreds of dollars, plus multiple interviews and visits to a U.S. embassy, all with no guarantee of success.

“I don’t think Trump has any idea what it takes to get to the United States as a legal immigrant."

For many, even a tourist visa is a problem. I know of an elderly couple of means in the Democratic Republic of Congo who applied for United States tourist visas in 2015 to see their son’s university graduation. Despite the husband being a successful business owner with clear reasons to visit, their first visa application was denied; according to the embassy officer, they had not demonstrated that they had sufficient reason to return to Congo. Only after a third time paying fees and going through interviews (and with the intervention of a U.S. senator) were they granted a tourist visa.

“I do not understand how he can say such things,” many of the African sisters I met in Kenya, Ethiopia and Tanzania said of Mr. Trump. “Does he really not understand the lives of the poor?” An indifference to the reality and complexity of people’s lives, both the privileged and the poor, permeates his statements about the continent. Ultimately, he seems to lack a sense of shared humanity.

On my last day in Nairobi, I visited a tailoring class for women who live in a nearby slum. One of the young women, Caroline, was wearing a beautiful red-and-black kitenge dress. As I shook her hand, I exclaimed: “I love your dress! I have one in the same fabric!” We all smiled, admiring each other’s dresses, and conversation became easier. As people, we are not all that different in our hopes, dreams and sometimes fashion.

I came to class to learn about the challenges for poor women in Nairobi. As the walls of injustice, poverty and my own privilege that often divide us began to crack, sharing was possible. Trusting that I was not there to judge them, they began to share and to ask me questions about the United States. But the women in that class did not ask me about politics or President Trump. They are routinely ignored by global power structures, even though, living on the margins of society, they are continually affected by the decisions of distant men in power.

I wish there were a way for President Trump to have such a truly human encounter with everyday people living in these countries he dismisses so easily. Perhaps then he will finally able to recognize that we are all human with equal dignity. Such an encounter could include a willingness to learn about the diverse history of African nations and the complex lives of the global poor. Such an encounter might lead to a realization of the gifts that so many people in African nations bring to their own countries and as immigrants to the United States.

Ms Clark may be perfectly correct that many in Africa are apprehensive about President Trump's understanding of their conditions and needs. But one must take her summary comments with a grain or two of salt when she inadvertently reveals her own prejudice:

"I was SUPRISED to learn from a Nigerian Jesuit that many in Nigeria prayed for his election."

The headline for this article is a real doozy :"Trump's unpredictable style is causing existential anxiety"......

The article is a newsy opinion piece interesting to read but lacking in depth. It reminded me of many pieces that fail to take into account the importance of family, clan, culture and religion in sustaining a country along with an accountable government. Much of the aid from outside allows governments to continue the corruption while their people languish. At least that is what I’m told by Americans creating micro-economies for locally produced crafts, art works and goods putting the money into the families directly.