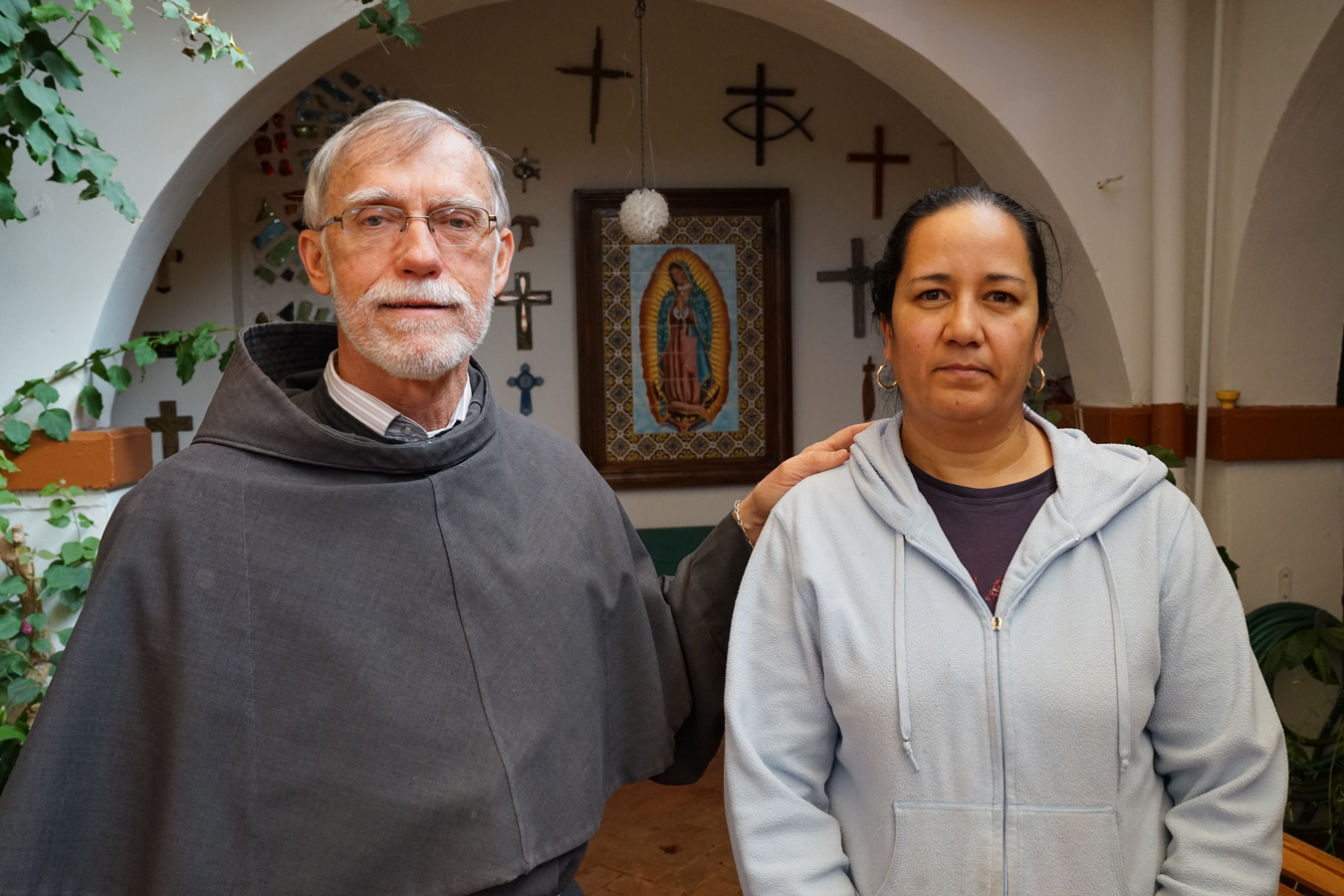 This Franciscan retreat center has a new mission: welcoming the undocumented

This Franciscan retreat center has a new mission: welcoming the undocumented

In many ways, it was a typical 15th birthday party for Stephen Taborda. He celebrated with family and friends, ate pizza and cake and opened presents. But Stephen’s mother was not there. She was deported in June.

Stephen’s father, Jorge Taborda, came to the United States from Colombia 19 years ago. That was before Stephen was born. Mr. Taborda, a Spanish professor, was involved in human rights efforts there. As ongoing conflicts between the Colombian government and guerilla groups beset the nation, Mr. Taborda began to receive death threats.

“I told my wife we had to leave,” he said in an interview with America. He and his wife came to the United States with their firstborn son, Jefferson. For a time, they had permission to work in the United States.

They applied for asylum, but it was ultimately denied. Nevertheless, Jefferson, a recipient of the Deferred Action for Childhood Arrivals, graduated from New Mexico State University. Stephen was born in the United States and is a citizen.

Mr. Taborda, his wife, Francisca, and his eldest son had lived with deportation orders for years. They did not fear deportation because they were not violent criminals and the Obama administration had a policy that targeted those guilty of grave crimes. The Trump administration changed that policy and targets all undocumented immigrants for deportation.

In May, Mr. Taborda’s family lived through the consequences of that change.

Mr. Taborda, his wife, Francisca, and his eldest son had lived with deportation orders for years.

“Everything fell apart,” Mr. Taborda said through tears. Immigration and Customs Enforcement officers detained his son Jefferson and Francisca. Jeff was eventually released, due to his DACA status. But after a month in detention, Francisca was deported to Colombia.

Francisca told her husband of the detention before he dropped off Stephen at school that day. Mr. Taborda explained what was happening to his son. They had discussed the possibility of deportation as a family and what steps to take. “I told him, ‘Look, son, I may not see you again after this,’” Mr. Taborda said.

“It’s O.K.,” he remembered his son telling him.

Mr. Taborda fled to Our Lady of Health in Las Cruces, N.M. He believed angels protected him from ICE on his journey. From there, he and Stephen, who suffers from a congenital back condition, wound up living at Holy Cross Retreat Center in Las Cruces. They have been there ever since.

“The Gospel requires me to care for someone in need. There are no options for them.”

“We chose to call it ‘Franciscan hospitality,’” Father Tom Smith, O.F.M.Conv., said of the center’s policy of welcoming undocumented immigrants. Calling it “sanctuary” would be misleading, he said, because if ICE officers show up at the center with court orders, there is nothing the priest could do to stop them.

“The Gospel requires me to care for someone in need. There are no options for them,” he said. “For me, this is the Gospel response.”

The retreat center has even changed its mission statement to call itself a “center of hospitality.” In addition to currently welcoming two undocumented immigrants, the center also welcomes asylum seekers, refugees and the sick.

“That’s how I see our role. It’s not just to facilitate retreats,” said Father Smith, director of the retreat center. “We’re proud to be Catholic and proud to do this.”

For the most part, the decision has been welcomed by the community. It has helped humanize the immigration issue for them, Father Smith said. “It’s not just, ‘I’ll pray for you.’ We need to do something personally for them. It makes it a human issue, not a political one. It’s a call to respond to them as individuals, not ‘those illegals.’”

Nonetheless, if undocumented immigrants who are guilty of violent crimes came to the center, Father Smith said he would have to turn them away. “That’s a safety issue. That’s not the kind of hospitality we are offering here.”

The Archdiocese of Los Angeles has experienced some of the complexities involved with offering sanctuary to undocumented immigrants. In the 1980s, some parishes offered refuge to Salvadorans fleeing the civil war in their country. Today, archdiocesan officials said they are not aware of any parishes offering sanctuary but said there was no hard and fast policy against it. They take each case individually.

“It is important for those who can speak for us to do so. My daughters have dreams, to study and work here. I believe God will make that happen.”

“The problem with using the term ‘sanctuary’ is that it provides a false sense of security to people,” said Isaac Cuevas, associate director of immigration affairs for the archdiocese. Church leaders may be arrested if they stand in the way of a court order and warrant.

The archdiocese has prioritized workshops, referrals for legal counsel through Catholic Charities and identifying what legal avenues may be available for undocumented immigrants. Parishes are also pressing the media to report on families with heartbreaking immigration dilemmas.

When undocumented immigrants know their rights, they are better able to navigate legal entanglements, according to Mr. Cuevas. Families should also have plans in place, like Mr. Taborda’s family, in case the unthinkable does happen. They designated a family to care for their younger son and had set up powers of attorney.

“Knowing the stories of these families demonstrates how complex the situation is,” said Andrew Rivas, director of government and community relations for the Archdiocese of Los Angeles. “We need comprehensive reform to end the separation of these families.”

Lorena Rivera, who has lived at Holy Cross Retreat Center with her daughter since October, does so to avoid being separated from her two daughters. Her 22-year-old is a DACA recipient and her 9-year-old is a U.S. citizen.

Both Ms. Rivera and Mr. Taborda spend their days helping at the retreat center. They help cook for retreat groups and help with the cleaning.

“I’m a person of faith. I know God will help,” Ms. Rivera said, taking a short break from her kitchen duties to speak with America. “It is important for those who can speak for us to do so. My daughters have dreams, to study and work here. I believe God will make that happen.”

I sincerely hope that the next group of people who decide to break the law are not a group who think that Catholic doctrine is bad for America. When we decide that a group of sincere people with a ‘good purpose’ can break the law we are headed to anarchy. Even God would not want this, I think. Either we are principled or not-can’t be both. Jesus did not make suffering go away and it is difficult to see it but America is the strongest buttress against it and tearing down American law is not the solution.