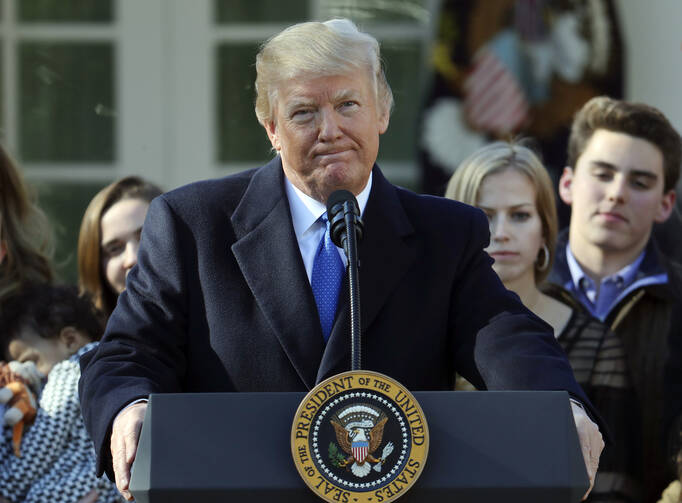 President Donald Trump addresses the 2018 March of Life from the Rose Garden of the White House in Washington. (AP Photo/Pablo Martinez Monsivais)

Mr. Trump told the crowd that pro-life activists and his administration are working together “to build a society where life is celebrated, protected and cherished.”

“We are protecting the sanctity of life and family as the foundation of our society,” he said.

President Trump: “We are protecting the sanctity of life and family as the foundation of our society.”

The president lamented the Supreme Court decision that legalized abortion in the United States, saying it has “resulted in some of the most permissive abortion laws anywhere in the world.”

“It is wrong, it has to change,” Mr. Trump told the crowd. “Americans are more and more pro-life. You see that all the time.

“Under my administration, we will always defend the very first right in the Declaration of Independence, and that is the right to life,” Mr. Trump said, before giving an aside about the strength of the economy and lowering unemployment rates that ended with “we’re really proud of what we’re doing.”

Jeanne F. Mancini, president of the March for Life, told the president following his remarks, “You have a group here who is greatly appreciative of the policies you are enacting.”

Mr. Trump once supported legalized abortion, telling NBC News in 1999, “I am very pro-choice,” though he added, “I hate the concept of abortion.” In 2011, Mr. Trump declared himself pro-life in a speech to conservative activists, though his transition to the movement has not always been graceful.

In 2016, Mr. Trump said if abortion were against the law, women who obtain one should face “some form of punishment,” sparking backlash from both supporters of abortion access and opponents, who generally do not promote laws to punish women for abortion.

Mr. Trump later walked back those remarks, telling the New York Times Magazine that he “didn’t mean punishment for women like prison. I’m saying women punish themselves. I didn’t want people to think in terms of ‘prison’ punishment.”

The Susan B. Anthony List, an anti-abortion group, had previously said Mr. Trump could “not be trusted” and called him “unacceptable.” But during the general election, the group got behind the president and it has praised him as his administration awarded anti-abortion activists a few key victories.

Chief among them is the confirmation of conservative Justice Neil Gorsuch to the Supreme Court. Mr. Trump has also revived and expanded a ban on sending U.S. aid to groups overseas that provide abortion counseling, and he signed legislation allowing states to withhold federal family planning funds from clinics that provide abortion services. The administration has made its priorities clear in other ways—including appointments to key government posts and a new mission statement for the Department of Health and Human Services. The agency announced it is dedicated to supporting Americans at "every stage of life, beginning at conception."

Speaker of the House Paul Ryan: “Can we just thank God for giving us a pro-life president back in the White House?”

And on Thursday, the administration announced the creation of a new office to protect the religious rights of medical workers, including those who oppose abortion.

Still, some pro-life Catholics were unhappy with Mr. Trump’s video appearance at the March.

A group of Franciscan friars planned to attend the march and hold a banner reading, “Keeping Families Together is Pro-Life,” a challenge to Mr. Trump’s immigration policies.Speaker of the House Paul Ryan, who speaks often of how his Catholic faith informs his politics, also spoke on Friday.

Mr. Ryan tried to energize the crowd, asking them, “Can we just thank God for giving us a pro-life president back in the White House?”

He also sought to contrast the march with other demonstrations that support abortion, saying, “You march with joy and hope, not anger and hate. You don’t see that on the other side, do you?”

What does it mean to love our enemies in the abortion debate?
Sam Sawyer, S.J.

Last night, Cardinal Timothy Dolan, the archbishop of New York and the head of the U.S. bishops’ pro-life committee, invoked Martin Luther King Jr. during a homily that opened the National Prayer Vigil for Life. He said that like “Pastor King,” as Cardinal Dolan referred to him throughout his homily, “our belief in the dignity of the human person and the sacredness of all human life propels us to concern for human life wherever, whenever and however it is threatened, from racial antagonism to justice for immigrants, from the war-torn to the hungry.”

He added that like the slain civil rights leader, whose life was honored with a national holiday earlier this week, “our prayers and witness are about civil rights: the civil right to life and to equal protection under the law, guaranteed by our Constitution, for the most fragile, marginalized and threatened—the tiny, innocent baby in the womb.”

Organizers for the 45th March for Life described the event on Friday as the “largest annual human rights demonstration in the world.”

Today, I was honored and proud to address the 45th Annual @March_for_Life! You are living witnesses of this year’s March for Life theme: #LoveSavesLives. pic.twitter.com/DMST4qhDmp