In Peru, Pope Francis deplores degradation of the environment and the toxic effects of corruption 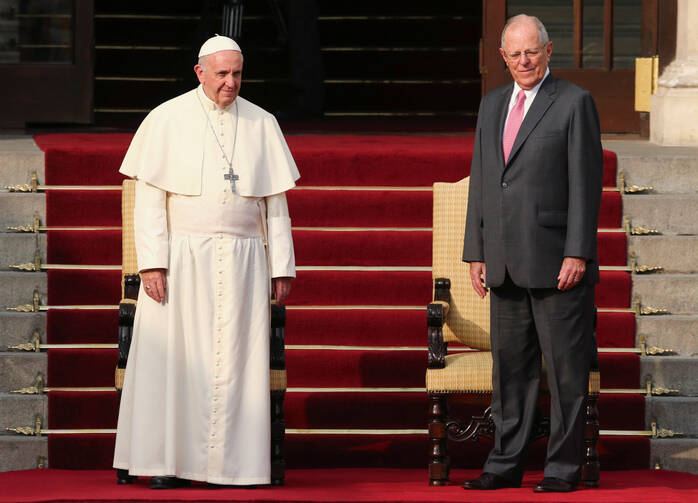 After visiting Peru’s Amazonian region, where he denounced threats to its people and the degradation of its environment, Pope Francis returned to Lima, the country’s capital and center of power. In Lima, he called for vigilance against corruption, which the pope described as “the often subtle form of environmental degradation that increasingly contaminates the whole system of life.”

“Black market mining,” the pope said, “has become a danger that is destroying people’s lives; forests and rivers are being destroyed, with all the richness they possess.

“This whole process of degradation brings with it and encourages organizations operating outside of legal structures,” the pope said, organizations which “debase so many of our brothers and sisters by subjecting them to human trafficking, irregular employment and crime...and to other evils that gravely affect their dignity and, at the same time, the dignity of the nation.”

He pointed to “the way that we are stripping the earth of its natural resources, without which no forms of life are possible. The loss of jungles and forests means not only the loss of species...but also the loss of vital relationships that could end up altering the entire ecosystem.”

Addressing political and civic authorities and the diplomatic corps of this country of 31 million people, the pope said that these examples show clearly that “the degradation of the environment...cannot be separated from the moral degradation of our communities.”

He noted that this is the case not only in Peru but across the continent and commented: “How much evil is done to our Latin American people and the democracies of this continent by this social ‘virus,’ a phenomenon that infects everything, with the greatest harm being done to the poor and mother earth.”

Pope Francis is well versed in the reality of corruption in the most Catholic continent in the world. As archbishop of Buenos Aires, he witnessed firsthand its destructive effects in his native Argentina; he even wrote a small book on the subject.

In an interview with America before the visit, Ernesto Cavassa, S.J., the rector of the Jesuit university in Lima, explained how corruption has become a way of life in Peru and is accepted in some form by about 70 percent of the population. He noted that Peru finds itself listed 101st of 176 countries in the recent ranking on corruption published by Transparency International in 2016.

Pope Francis described the fight against corruption as “a battle that involves all of us.”

The pope’s decision to address this topic in Lima may have surprised some, considering the man next to him on the podium was President Pablo Pedro Kuczynski. The president narrowly evaded impeachment for corruption on the eve of the pope’s visit after reaching an agreement with part of his political opposition to pardon Alberto Fujimori. The former president was serving time in prison for corruption and human rights violations. The president was accused of accepting bribes from Oderbech, the giant Brazilian construction company.

In his speech at the Palacio de Gobierno, or government palace, Pope Francis said that “everything being done to combat this social scourge deserves our utmost attention and help.”

In Peru, Pope Francis says the church stands with the peoples of the Amazon and the earth
Gerard O’Connell

He described the fight against corruption as “a battle that involves all of us.” It “requires a greater culture of transparency among public entities, the private sector and civil society. No one can be excluded from this process,” he said.

He called on Peruvians to be “united in hope” and to take inspiration from the example of the great saints born in Peru “that blazed paths of faith for the entire American continent.” He mentioned one, St. Martin de Porres, “a son of two cultures,” who “showed the strength and richness that comes about when people focus on love.”

Francis concluded his speech by urging “all those in positions of authority, in whatever sphere, to insist on this path in order to bring your people and your land the security born of feeling that Peru is a place of hope and opportunity for all, and not just for a few.”

He assured them that the Catholic Church in Peru would accompany them in this effort.