The Editors: The citizens of Honduras must fight for democracy, and we must stand with them 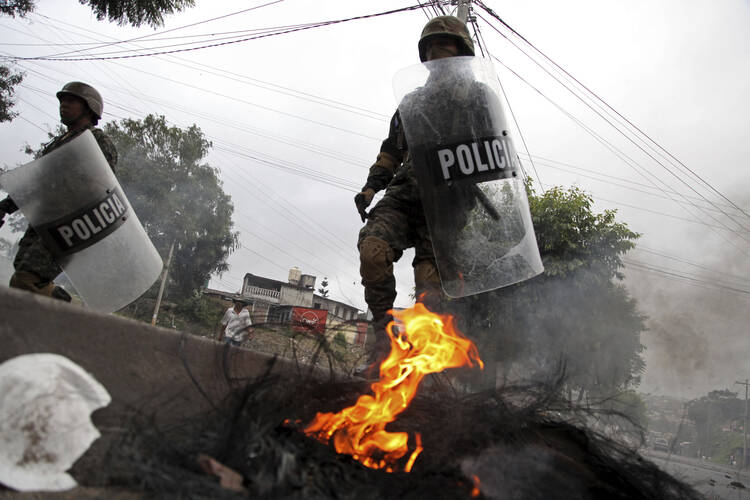 Democracy is for the dedicated, and sometimes holding government leaders accountable requires more than voting. That is why Ismael Moreno Coto, S.J., known as Padre Melo, has stepped up as one of the leaders of a national protest against the disputed outcome of the recent Honduran presidential elections.

Democracy is for the dedicated.

The incumbent, President Juan Orlando Hernández, claimed victory last month, three weeks after the Nov. 26 election. According to the disputed results, he defeated his opponent, Salvador Nasralla, by a narrow margin—42.95 percent to 41.42 percent. The Organization of American States would not stand by the results in Honduras and called for a new vote.A report issued by the Electoral Observation Mission in Honduras describes in detail intrusions into the computer system, improbable participation levels and recently printed ballots, among other irregularities.

Despite the O.A.S.’s misgivings, the United States has already recognized Mr. Hernández, a friend of White House Chief of Staff John Kelly, as the next president.

When a government tries to thwart the will of the people, it is a citizen’s duty to stand up and peacefully protest.

Less certain that the elections were decided justly were thousands of Hondurans who took to the streets to protest peacefully. They were met with tear gas and violence; more than 30 have died. Padre Melo and others resisting the election results have called for protests to continue. In an apparent effort to counteract the demonstrations, an anonymous flyer circulating in Honduras has accused Padre Melo and other protest leaders of having ties with criminal organizations and of inciting violence.

“All of the accusations are lies aimed at counteracting the grassroots organizing and the peaceful and democratic resistance,” wrote Roberto Jaramillo, S.J., president of the Conference of Jesuit Provincials in Latin America and the Caribbean in an open letter defending Padre Melo.

Padre Melo and those who stand up for democratic norms against a government that abuses them are examples of good citizenship. The Trump administration erred in recognizing Mr. Hernández as president before a vote that citizens can accept as legitimate was carried out. When a government tries to thwart the will of the people, it is a citizen’s duty to stand up and peacefully protest.

The citizens of Iran must fight for democracy, and we must stand with them

J, let us together support the people of Iran and Honduras!

I have no problem with supporting the citizens of Honduras.

In Honduras,Democracy has been infamously severed by the vulgar support of State Department.Reelection is not permited under the terms of our Constitution but the USA government has encouraged such violation to allow the corrupt Hernandez regime to retain power regardless of all its implication with drug traffiking and embelezzment of million and millions of dollars that the poor of Honduras badly need.

Again I wonder where is the voice of Card. Maradiaga?