Honduras Holds Elections, But Will Anything Change? 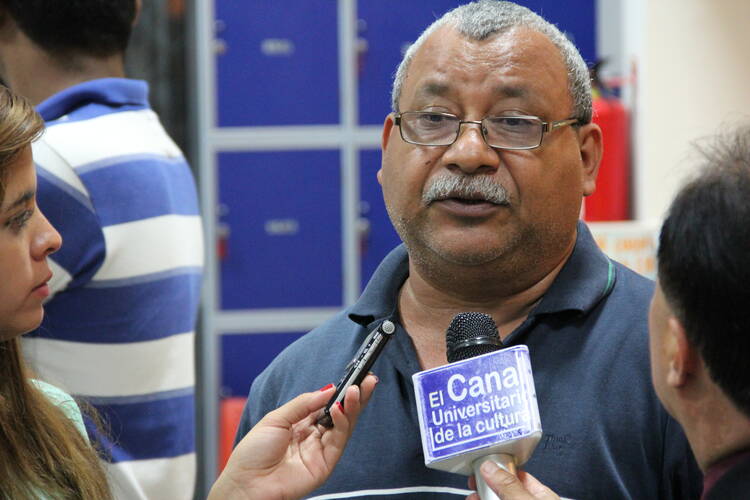 Editor’s Note: Some of the challenges facing Honduras today are featured in the Feb. 10 issue of America. After the country held national elections on Nov. 24, America asked Ismael Moreno Coto, S.J., popularly known as Padre Melo, to reflect on the implications of the elections. Padre Melo is the director of Radio Progreso and of ERIC, a social research and advocacy organization in El Progreso, Honduras. Shaina Aber and Leticia Isasi translated this reflection from the original Spanish.

In an uncertain environment full of suspicions, the electoral results in Honduras on Nov. 24 gave the triumph to Juan Orlando Hernandez of the National Party, the incumbent party. Following the election, information surfaced that in thousands of the electoral boards the majority of the delegates of four of the small parties were substituted by members of the National Party. Also, evidence has emerged of vote-buying at some of these same electoral centers. Individuals willing to sell their votes were told to take pictures of themselves with their filled-in ballot, so they could collect a corresponding payment from the National Party.

The international missions of the Organization of American States, the European Union and the United States Embassy observed the environment outside the voting centers, but these missions failed to effectively monitor the management of the ballots and their transportation to counting complexes after citizens deposited them in good faith at voting centers. The missions never corroborated the various formally registered complaints of irregularities and inconsistencies. In light of these doubts, the international reports should have waited before giving judgment. However, these missions supported the report of the Supreme Electoral Tribunal, and hastened to ratify even those results where independent international observers and national human rights and alternative media institutions suspected vote manipulation and cited inconsistencies.

A person might argue that the practice of buying votes is not technically illegal, but nobody can argue that it is a service to democracy and to the rule of law. Yet the official international missions said nothing about this open practice. It is not about being in favor of or against one candidate or another. It is about contributing to an accountable democracy through respect for the rule of law.

What awaits us? Although the presidency was won by the National Party, the further deterioration of the Honduran society is expected. The creation of the new military police force a few weeks before the elections, combined with the creation of legal frameworks like the charter cities law or the mining law, the deliberate delay of the process of purging the police and the judicial institutions of corruption, the politicized elections of the General Prosecutor and Assistant Prosecutor, all under the leadership of the president-elect, represent dark clouds that foretell a phase of growing authoritarianism, impunity, corruption and loss of national sovereignty in the framework of a “totalitarian and exclusive democracy.”

The current political reality, which began the day after the election, will likely become solidified through a caucus process in the Congress among the winning party and the other contesting forces that participated in the electoral process. In the election, the president-elect was not so much the clear victor chosen by the majority to govern the state of Honduras, as the person and political party able to consolidate a new political pact in co-responsibility with the other political forces that sought to overcome and replace the traditional Liberal/Nationalist bipartite government that has dominated the political environment during the past three decades.

It is true that the traditional Honduran bipartisan model has broken down, but those who drove it for more than three decades remain very active and will continue to be the main conductors of the new political pact in which the leftist party, Libre, will have to play a counterbalancing role. Libre must discern ways to present the demands and interests of social sectors that do not fit in the plans and interests of the more powerful sectors of the countries. With the victory of Juan Orlando Hernandez, a new political chapter begins, but it is led by the same political, economic and business elites that have driven the political process since the coup of 2009. In the new political environment, there are no signs that the instability and the institutional deterioration we have faced are going to diminish.

Click here to view all of America’s coverage of Honduras.