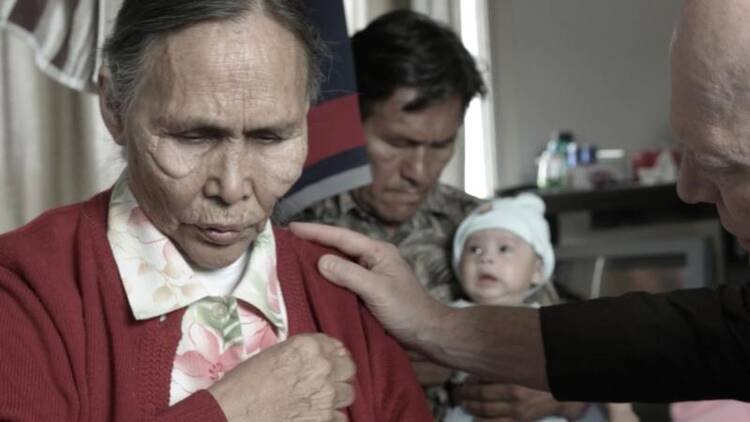 A parishioner is blessed in the film "In the Spirit of Reconciliation," a film by Father Larry Lynn, a priest of the Archdiocese of Vancouver who was a cinematographer before entering the seminary. (CNS photo/Spoke)

VANCOUVER, British Columbia (CNS) -- Father Larry Lynn was wrapping up a visit to the Northwest Territories, interviewing aboriginal survivors of residential schools about their experiences, when he thought to ask his tour guide about her life.

Reluctantly, Monique Sabourin agreed to be interviewed on-camera for the film being made by Father Lynn, a priest for the Archdiocese of Vancouver who was a cinematographer before entering the seminary. When the cameras started rolling, Sabourin spoke, unprompted, for 45 minutes and "told this story of paradise lost and paradise regained," Father Lynn said at an early December premiere of his film "In the Spirit of Reconciliation."

A member of the Dene Nation, Sabourin grew up in Fort Providence, on the banks of the Mackenzie River. Her father had gone through the residential school system but had never spoken about his experience. In the film, Sabourin said her father helped build the church in Fort Providence and covered any pain he felt with joy. He raised Sabourin in the Catholic faith and ensured she had a happy childhood.

When she was school aged, the Royal Canadian Mounted Police removed Sabourin from her home because her parents had stopped sending her to school. She was sent to a residential school run by the Sisters of Charity of Montreal.

An estimated 150,000 aboriginal children were taken from their families and placed into residential schools.

At the school, children were forbidden to speak any language other than English. Sabourin recalled being caught exchanging a few words in her native language with a cousin who was also at the school. She said both girls were pulled by their hair to the bathroom, where a nun washed their mouths out with soap.

Sabourin recalled that the next day, she was taken to the chapel and told she had to confess. "Confess what? I didn't know how to sin at that time," she said, sharing her story on camera.

Sabourin said she was one of many girls in her school who was sexually abused by a priest during her years as a student. According to Sabourin, when she and the other victims reported their abuse to the sisters, they were told to stop telling lies.

"They took my language, my love, my love for my people, my Jesus, my church," Sabourin recalled. Later in life, she turned to alcohol to numb the pain caused by the sexual abuse she had endured.

Similarly, George Tuccaro, a former commissioner of the Northwest Territories, also struggled with alcohol abuse in the years after he left residential school.

He said at the age of 29, while in a "drunk tank," he remembered one of the sisters at his school had told him he would never do anything with his life. Tuccaro decided he did not want to allow her prophecy to become reality.

On camera, Tuccaro said he began praying in that jail cell, asking God, "Can I give you back the remote control?"

His journey to recovery was not easy, but he eventually became a broadcaster for the Canadian Broadcasting Corp. and was appointed Commissioner of the Northwest Territories in May 2010.

Like Tuccaro, Sabourin also reached a point when she decided it was time to break the power her residential school experience had over her.

Speaking as part of a panel after a Dec. 6 screening of "In the Spirit of Reconciliation," Sabourin said, "It took 10 years of my life to realize where I was coming from."

In 1992, Sabourin sought treatment for alcohol abuse and has been sober ever since. She attended a Pentecostal church, but did not feel "at home." Finally, she said, "I went back to my church ... I have a lot of obstacles, but I keep facing them."

"It took 10 years of my life to realize where I was coming from."

For her, part of the healing process meant "accepting who I am as a Dene" and returning to the practice of her Catholic faith. "I had to love myself first and ask the Creator to help me," she said.

Sabourin had also participated in a three-part program, "Returning to Spirit." The program was created by aboriginal and church officials to help residential school survivors find a way to heal from their experiences, and to educate religious men and women about the effect residential schools had on students.

Sabourin developed and has received funding for a 12-step recovery program for aboriginal people in her community. She said 15 people had already signed up for the program, "and I thank Jesus for that."

Father Lynn told Catholic News Service he had not planned to make a film about survivors of residential schools.

He had been working on a different project for Catholic Missions Canada and had been scheduled to make one more trip to the Northwest Territories. Just weeks before that trip, in December 2015, the Truth and Reconciliation Commission -- established to hear the stories of those affected by residential schools and promote dialogue and healing -- issued its final report, which included 94 "calls to action."

Several of those calls to action recommended creating opportunities for all Canadians to learn about the impact of residential schools on survivors.

The priest said he hoped "Catholics all over North America will see this film and will be able to have insight into what colonialism has done ... I want aboriginal people to see the film, to think about how they are healing, how they are moving forward, because there are many, many, ways of dealing with it, and what we hear in public media, there's one story and that's not the complete story."

In 2009, Pope Benedict XVI met with a delegation from Canada's Assembly of First Nations and expressed his sorrow over what aboriginal children experienced in residential schools run by the Catholic Church. Phil Fontaine, then-leader of the assembly, said he hoped the pope's remarks would "close the book" on the issue of apologies.

One of the Truth and Reconciliation Commission's calls to action asked for a papal apology to be delivered in Canada. Canadian church and government leaders have invited Pope Francis, but no papal trip to Canada has been scheduled.

So many "graduates" of the residential schools went on to be incarcerated in the prison system because of their experiences at the schools. They were left with nothing, no family, no language, no history, so painful.