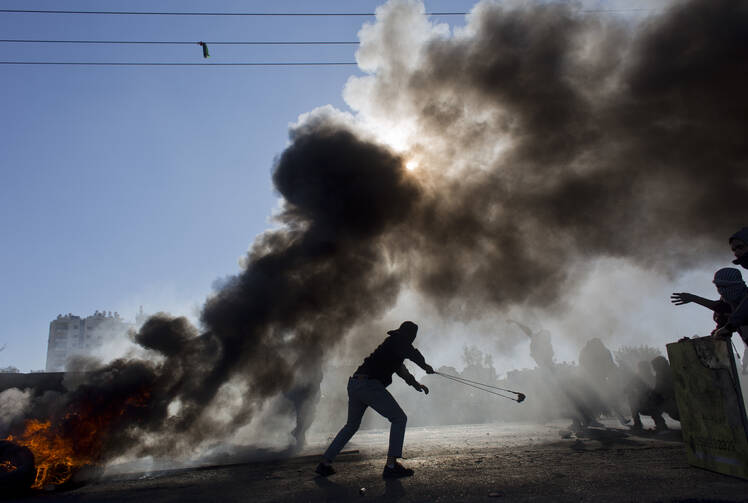 Palestinians clash with Israeli troops during a protest against U.S. President Donald Trump's decision to recognize Jerusalem as the capital of Israel in the West Bank city of Bethlehem, Friday, Dec.8, 2017. (AP Photo/Nasser Shiyoukhi)

Donald J. Trump’s appeal to many voters in 2016 was that he was different, not a typical politician. Hillary Clinton was the face of stability, competence and experience—same old, same old. Mr. Trump was inexperienced but dynamic. A preponderance of voters in key states chose to take a flying leap into the unknown. They wanted an agent of change. What the country got was an instigator of chaos.

I do not know that we have ever before had a pyromaniac in the White House, somebody drawn to setting fires, who relishes creating trouble and cannot be trusted not to take a match to other people’s homes and even his own.

Trump voters wanted an agent of change. What the country got was an instigator of chaos.

Not content with having one full-blown crisis over nuclear weapons with North Korea, President Trump seems determined to bring about another with Iran. The effort to decertify the nuclear agreement in the face of a chorus of experts unanimously attesting to Iran’s compliance with the agreement is remarkable—and unnecessary.

Last week’s decision to recognize Jerusalem as the capital of Israel is equally gratuitous. Nobody, not even Israel, was clamoring for the United States to do this, yet Mr. Trump chose to ignore his own advisors and reverse long-standing U.S. policy, antagonizing the Palestinians, setting back his own efforts to revive the moribund peace process, provoking the Muslim world and stirring condemnation from the international community. Fourteen out of the 15 members of the U.N. Security Council, all but the United States, denounced the decision. The announcement has ignited protests and riots; as of this writing, four Palestinians have been killed and 50 injured.

Nobody, not even Israel, was clamoring for the United States to do this, yet Mr. Trump chose to ignore his own advisors.

All this for what? To honor a campaign promise? To satisfy donors such as billionaire Sheldon Adelson, the pro-Israel magnate close to Benjamin Netanyahu who gave millions to fund Donald Trump’s election? Mr. Adelson is said to have the president’s ear and to have pressed him to move the U.S. embassy to Jerusalem.

In announcing his decision to move to the embassy, Mr. Trump insisted he was simply “recognizing reality.” But it is a reality that violates international law and rewards Israel’s occupation. It is a reality that Israel has been steadily creating for 50 years by establishing Jewish colonies in the West Bank and East Jerusalem while harassing Palestinian Arabs living in the occupied territories with land expropriations, home demolitions and discriminatory policies intended to limit their population growth and hasten their departure from the Holy Land.

The United States is sending a message that might is the only right it recognizes and respects.

Some wonder if the announcement may be part of a long game the Trump administration is playing. But if there is a quid pro quo for recognizing Jerusalem as the capital of Israel, effectively accepting Israel’s position in one of the most sensitive issues in the Palestinian-Israeli conflict, it has yet to be presented. And the strategy that is rumored to be in the works is an outside-in approach, where Saudi Arabia cements its burgeoning alliance with Israel—one based on their mutual hostility to Iran—by dictating terms to the Palestinians, offering them a poison pill of a peace agreement, which, it is assumed, they will have no choice but to take.

Jerusalem plays a key role in the faith traditions of Jews, Muslims and Christians. For this reason, the United Nations wanted it to be an international city and has never recognized Israel’s unilateral declaration of sovereignty over the city, either before the 1967 war or after. The day before Mr. Trump issued his announcement, representatives of Jerusalem’s Christian community pleaded with him not to make it. Pope Francis condemned the decision after it was reported. While it may play well with members of the Christian evangelical community who fantasize about the Second Coming of Christ, those interested in peace cannot but be disheartened and dismayed.

By ignoring U.N. resolutions on Israel and Palestine, the United States is sending a message that might is the only right it recognizes and respects. It is a call to arms for the Palestinians, a signal to them that to look to the international community for recourse is futile, that the only way their needs will be addressed is through brute force. It is a signal to Israelis as well, a green light to take what land they want without fear that they will ever need to return it or be accountable for the circumstances in which they took it. Some elements within Israel may find in its toothless acquiescence to Israeli expansionism encouragement for worse deeds—Palestinian expulsion or transfer.

Perhaps “the ultimate deal” in the Middle East that Trump promises will obviate or negate the dangers of his recognition of Jerusalem as Israel’s capital. Or perhaps the “ultimate deal” is no deal at all, and, like he has with his senseless policy on Iran, President Trump will have recklessly stirred the pot with no good end in sight.

Save the political posturing for the MSM. I expect more from America.

Given that most Americans, most Christians in Jerusalem & the pope disagree with the decision & believe it makes the holiest of places unsafe, America is right in commenting on the situation.

What does Ms. Patterson think of the pyromaniacs who voted for The Jerusalem Embassy Act of 1995 (93-5 in the Senate, yeas including Senators Feinstein and Biden, and 374-37 in the House). Was this a case of legislators voting to earn points with their Jewish constituents while hoping, maybe assuming, that no President would ever actually implement the act? Would Ms. Patterson regard that as statesmanship?

Why do much of the world and many of our own people believe that outsiders can force a peace agreement between two parties when one of the two parties (Palestine) continuously refuses to meet with the other (Israel)? And why do we believe that an agreement could be achieved if both parties would agree to meet when one of the parties' (Palestine) cannot get their own factions' support to represent their side?

Margot Patterson is a writer who lives in Kansas City, Mo.and was a senior writer, then opinion and arts editor at “The National Catholic Reporter” for seven years and that makes her America Magazine's expert on the Middle East by parroting every anti- Israel, pro Palestinian mantra used over the last 50 Years.
Ms Patterson writes "Trump isn’t ‘recognizing reality. He’s making it worse."
Obviously It is Ms. Patterson who fails to "recognize reality".
President Trump- said, "The old approach hasn’t worked", and “it would be folly to assume that repeating the exact same formula would now produce a different or better result.”
Einstein said- "insanity- doing the same thing over and over again and expecting a different outcome."
Obviously President Trump has imposed Einstein's definition of insanity on the perpetual "Peace Talks" and opted for a new direction.

Trump's decision to move the embassy to Jerusalem accomplishes two things - it makes evangelicals happy and it distracts from the Mueller investigation. If people get killed, that is a side-effect that Trump can live with.

My sense is that Trump is developing dementia and it doesn't mix well with his other psycho-pathologies.

Ms Weber,
Suggest you check out "Toxic Hatred of Trump a Sign of Non Compos Mentis" by Alicia Colon and then take a look into a mirror.

It's interesting the political topics that America, the magazine, will cover. They seem to be safe on the surface that they will be anti-Trump or anti-Republican without too much blow back. They also reflect the news sources that the authors and a lot of commenters here use.

There are a lot of fake News and false narratives going around and it is easy to tell how people get their news by the content of the articles written and comments made.

Now I am no expert on the Middle East and neither is Ms. Patterson or anyone else at America. Why was she chosen to write this article? It is one of several in just a few days.

This move by Trump had been planned for months and the various governments of the region were apparently consulted. Whether it proves positive or not is yet to be determined. There has been analysis of all US presidents positions on Israel since Truman and the conclusion was that the Arab world does not really care about Israel and Palestine that much.

Relative to the Pope, he is not a player in this but must appear to be fair and for non violence. It is always interesting to see how he will react but he is not of any importance in this matter despite the fact that the religion he heads originated in Jerusalem.