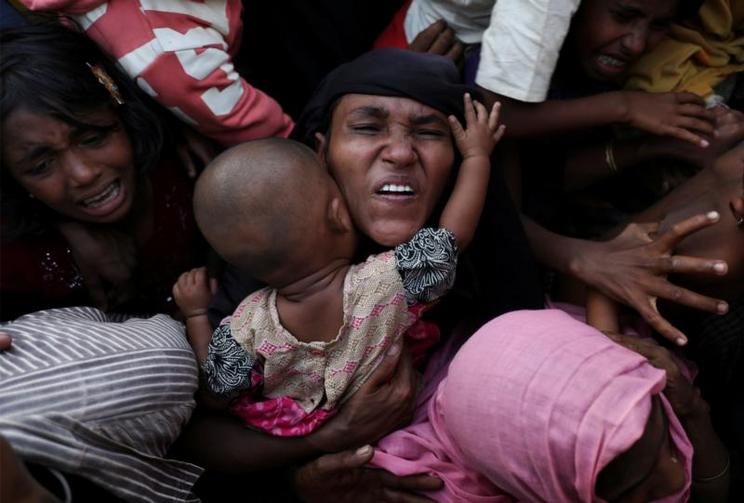 Human rights advocates and diplomats are continuing to debate the refusal of Pope Francis to use the ‘R’ word during his visit last month to Myanmar. Did his failure to directly address the Rohingya crisis until he had personally met with refugees in Bangladesh represent judicious statesmanship or a surrender to the nation’s military?

In Geneva this week, in the face of ongoing denials of responsibility from Myanmar authorities, the chief human rights enforcer for the United Nations wondered aloud if the experience of the Rohingya Muslims being driven out of the nation’s Rakhine State into Bangladesh could represent a genocide. And on Dec. 5 the U.N. Human Rights Council passed a resolution condemning systematic and gross violations of human rights in Myanmar, alleging that crimes against humanity have “very likely” been committed against the Rohingya minority in Myanmar.

But while diplomats and advocates weigh in on the crisis, Catholic Relief Services in Bangladesh, supporting the local Caritas office, is responding with humanitarian assistance, delivering food and critical survival supplies to thousands of Rohingya families.

They arrive in Bangladesh hungry and exhausted, said Caroline Brennan, the emergency communications director for C.R.S., sometimes after traveling for days in fear for their lives.

In mid-November she traveled to the region to report on conditions in the fast-growing refugee do-it-yourself camps. “I found myself at the Sabrang Harbor, which is an entry point along the Bangladesh border where people were arriving,” Ms. Brennan said. “I was there very early one morning. You would just see these small boats…just filled to the brim with families. A majority of those fleeing are children.

“You see a lot of women with their children, and you would see many elderly people, family members being carried by their adult children literally over their shoulders or in blankets or in buckets because they were so frail and so hungry.”

The arriving refugees, she said, “are very weak, exhausted, drained emotionally, physically, for many financially, just to make it as far as they had at that point.”

While diplomats and advocates weigh in on the crisis, Catholic Relief Services in Bangladesh is delivering food and critical survival supplies to thousands of Rohingya families.

While Myanmar officials continue to deny that the agents of this misery are its own military, reports from Human Rights Watch and Amnesty International leave little doubt that the suffering is the handiwork of government security forces backed by Buddhist villagers of Rakhine State.

Human rights groups have reported that summary executions of unarmed villagers and sexual assault have characterized the weeks of violence endured by the Rohingya villagers. The violence began in August when security forces responded to terror strikes by a nascent Rohingya insurgency.

Based on what she heard, Ms. Brennan said, “the nature of the violence is truly beyond imagination in terms of what people have faced and endured.”

While C.R.S. plans for the stabilization of the refugee camps in the coming months, in the coming weeks it will focus on delivering urgent survival aid, according to Ms. Brennan. “Medical assistance certainly is needed there now. Children are being born and at the same time you see cemeteries forming in these camps as people are laid to rest. So your milestones of life don't stop in these contexts.

“That broad range of assistance, from what you need today to make it to tomorrow and also what you need just to be able to have a semblance of stability, those are all needs that people face right now,” she said.

“There’s really been an extension of brotherly solidarity among the Bangladeshi population with the Rohingya families."

Owing to its unfortunate wealth of experience responding to the region’s many natural calamities, Caritas Bangladesh is especially well-equipped to handle this man-made variant, according to Ms. Brennan. She said the nation’s small Catholic community has traditionally had an impact on such humanitarian responses that far exceeds its numbers.

“In Bangladesh, the Catholic and Christian population is less than 1 percent,” she said, “yet at the same time, you have this Catholic organization that’s supporting almost one-third of the refugee population. They’re reaching 225,000 people, and they play such a role across the country.” The nation’s Catholic leaders, she suggested, as a trusted and respected voice, could sponsor the dialogue that must emerge toward ending the crisis and returning the Rohingya to their homes.

Ms. Brennan also lauded the efforts by authorities in Bangladesh and the villagers in border communities where Rohingya camps are rising. “I have to say it’s really impressive to see how the government of Bangladesh has responded, and the host communities,” she said. The refugees, she said, now easily outnumber the populations of these “small, sleepy border towns.”

She has been impressed by how welcoming these small communities have been under difficult circumstances. “There’s really been an extension of brotherly solidarity…among the Bangladeshi population with the Rohingya families and refugees who are arriving. It has been remarkable. I can’t imagine many places in the world absorbing as many people so generously and so quickly.”

But resources have been stretched thin. “This has escalated so fast; there are so many needs there.”

More than 620,000 Rohingya villagers have arrived so far and are establishing their own haphazard refugee communities at the border. The camps are far from orderly; drainage is insufficient or absent altogether; fresh water and survival supplies are hard to come by; shelter is inadequate.

“But people talk about feeling safe,” Ms. Brennan said. “They can sleep. Their children can make noise. A lot of mothers describe just…begging their children to stay quiet so that they wouldn’t be found as they were crossing fields and forests at night, or even streams at night. So there is at the very least a sense of safety.”

But the thousands of Rohingya now in Bangladesh have no means to support themselves and most have exhausted whatever meager resources they had in their flight from Rakhine.

“There’s nothing to do. There’s no way for people to earn an income there legally,” Ms. Brennan said. “They’re not legal refugees; they’re not able to support themselves; and they really just arrived with nothing. And so they’re very much, right now, dependent on aid—but at the same time very much wanting to support themselves and also know what their options are about getting safely back to their homes.”

Those options are unclear as the humanitarian community ramps up its response. It could be many months before a restoration of these villagers to Rakhine could be undertaken. U.N. human rights chief Zeid Ra'ad al-Hussein said on Dec. 5 in Geneva that no repatriation of Rohingya to Myanmar should occur without “sustained human rights monitoring” to ensure they can live safely and in dignity.

In the meantime, C.R.S. and Caritas Bangladesh will continue to provide emergency aid even as they begin making preparations for improving conditions in the camp and perhaps helping the refugees settle in for what could prove a lengthy stay in Bangladesh.