Will a Vatican conference on nuclear arms bring a diplomatic breakthrough? 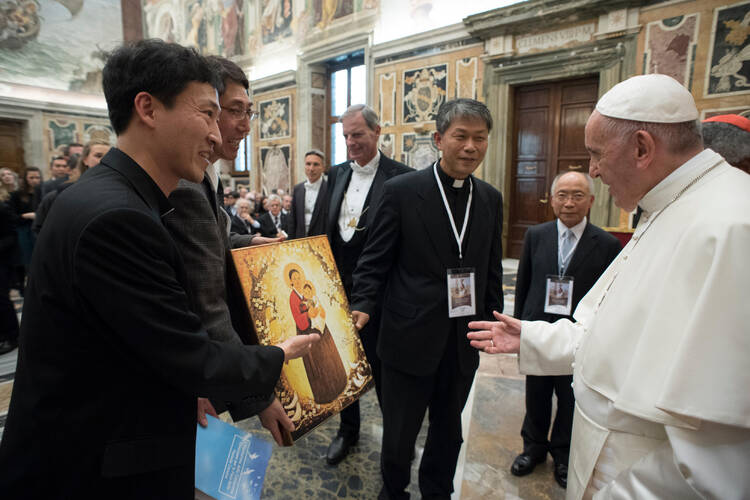 Pope Francis meets participants in the International symposium on a nuclear-weapons-free world, at the Vatican, Friday, Nov. 10, 2017. (L'Osservatore Romano/Pool Photo via AP)

A Vatican conference held Nov. 10 to 11 on nuclear disarmament and development was a serious diplomatic event that gave Pope Francis the opportunity to publicly condemn the possession of and threat to use nuclear weapons, the chief elements of the policy of nuclear deterrence.

For several years the Vatican has been critical of deterrence as an obstacle to disarmament, and the Holy See was among the first state parties to sign and ratify the new Treaty on the Prohibition of Nuclear Weapons adopted at a U.N. conference on July 7. But Francis’ Nov. 10 statement on nuclear weapons was the first time the pope himself voiced opposition to the policy of deterrence. “The threat of their use, as well as their possession,” he told an audience of conference participants, “is to be firmly condemned.”

A Vatican conference held Nov. 10 to 11 on nuclear disarmament and development was a serious diplomatic event.

The papal condemnation is a strong challenge to deterrence strategies of the superpowers, including the United States, and to the so-called umbrella states that rely on the extended U.S. deterrent as part of their defense against more powerful adversaries.

In another diplomatic signal, Alexei Arbatov, the seasoned Russian arms control negotiator, gave a constructive talk about the urgent need to move toward further cuts in nuclear weapon stockpiles. In a sobering review of the current strategic environment, Mr. Arbatov declared that “nuclear deterrence will not serve as a factor of preventing regional and global war in the decades to come.”

The well-respected Russian scholar called for “serious moves far beyond nuclear deterrent by the U.S., Russia and other influential nations” and for a shared principle that “any use of nuclear weapons, however limited, is inherently escalatory and should be excluded from great powers’ strategic relations.”

The papal condemnation is a strong challenge to deterrence strategies of the superpowers, including the United States.

Among the measures Mr. Arbatov recommended were: efforts to reduce tensions in Europe on Russia’s periphery, reduction of military exercises, enhancement of the 1972 and 1989 nuclear accident avoidance conventions, resolution of conflicts around the Intermediate Nuclear Forces treaty and initiating without delay follow-on talks on New START, a 2010 nuclear arms reduction treaty between the United States and Russia.

The Russian Federation had requested participation in the meeting, choosing the neutral terrain of Vatican City to offer a proposal for resuming arms reduction talks.

The well-respected Russian scholar called for “serious moves far beyond nuclear deterrent by the U.S., Russia and other influential nations.”

The other major diplomatic encounter was an exchange between Rose Gottemoeller, the deputy secretary general of NATO and former senior arms control official in the Obama administration, and two of the leading diplomats responsible for the new U.N. Treaty on the Prohibition of Nuclear Weapons, Austria’s Thoma Hajnoczi and Mexico’s Jorge Lomonaco, now ambassador to the Organization of American States in Washington, D.C.

The United States and NATO have been firmly opposed to the ban treaty; the Netherlands, the only NATO member state to take part in negotiations leading to the treaty, was the only participating state to vote against it.

Ambassador Lomonaco, citing the new treaty’s article urging engagement with those countries that had not supported the ban, suggested the treaty’s supporters pursue opportunities for new discussions with “progressive parties” ready to explore common ground in limiting the dangers of nuclear weapons.

The papal condemnation will present a considerable challenge to U.S. bishops and other conferences in teaching the new position on the immorality of deterrence and counseling the faithful on their duties as citizens and professionals with respect to nuclear weapons.

Building a Better Peace: A future worthy of our faith
Maryann Cusimano Love

Recognizing the importance of building concern for the issue among the public, the Holy See invited the participation of students. Thirty-seven students and faculty from Georgetown, the Catholic University of America and the University of Notre Dame attended the conference as part of the three universities’ efforts to re-engage the U.S. Catholic public with the cause of nuclear disarmament.

The Holy See’s initiatives in recent years on disarmament, with treaties banning landmines and cluster munitions and curbing the arms trade as well as banning nuclear weapons, have been closely tied to civil society movements. The Vatican sponsors used the conference to affirm those ties. Numerous actors from that world, including the latest Nobel Peace Prize winner, Beatrice Fihn of the International Campaign against Nuclear Weapons and Susi Snyder of the Dutch group PAX, participated in the conference.

Correction, Nov. 20:The dates of the conferences have been corrected to Nov. 10 and 11.

Drew Christiansen, S.J., former editor of America and a distinguished professor at Georgetown University, participated in the conference. An earlier version of this article appeared on the university’s Berkley Center website.