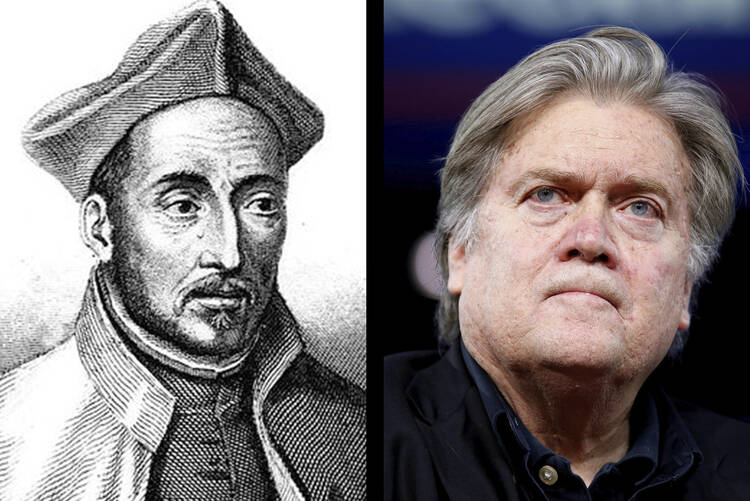 A new biography of the former White House advisor Stephen K. Bannon released this week includes some surprising revelations by Mr. Bannon regarding his embrace of Catholic spirituality. Specifically, Mr. Bannon, a notorious figure among many American Catholics, credits his daily practice of the examen, a meditative daily exercise recommended by St. Ignatius of Loyola in his Spiritual Exercises, with helping him quit drinking and abstain from alcohol for over 19 years.

In response to a query from America about his comments in the book, Mr. Bannon said via text message, “The simple but powerful technique of the daily examen has become a tool for me to lead a better, more fulfilled life. The daily exercise has helped to ground me by understanding my failures in the previous day before turning to the day ahead.”

By the late 1980s, Mr. Bannon says in Bannon: Always the Rebel, written by Keith Koffler and released on Nov. 13 by Regnery Publishing, he recognized that his alcohol consumption “was definitely having an impact on me, on just my ability to perform.... I didn’t have a drinking problem, but I didn’t have a drinking solution.” He stopped drinking alcohol completely in 1998, Mr. Bannon says, and has abstained ever since by (in Mr. Koffler’s words) “practicing the spiritual exercises conceived by St. Ignatius of Loyola, the founder of the Jesuit order.”

Steve Bannon: “The daily examen has become a tool for me to lead a better, more fulfilled life.”

While Mr. Bannon has publicly stated in the past that his Catholic faith significantly informs his worldview, he has been strongly criticized by many Catholics, including bishops, for his championing of public policies rooted in anti-Islamic and white nationalist worldviews, as well as for his support for draconian policies aimed at curbing government assistance to the poor. Mr. Bannon supported President Trump’s proposed “border wall” with Mexico as well as the president’s attempts to ban citizens from certain Muslim-majority countries from entering the United States.

“I could center myself and get a practical program for each day,” Mr. Bannon is quoted in reference to the examen (also known as the “examination of conscience”) in the biography. “It’s a five-step program to, essentially, become aware of the presence of God in your life, the presence of God as you review the day at the end of the day. You also then review the day with gratitude. You pay attention to what emotions you had at certain things. You choose, each day, what was the chief feature of that day—was that anger? Was it jealousy? It’s just a way to settle yourself. To read religious texts in a certain way. Basically, you pray.”

Mr. Bannon has prayed the examen every day since he stopped drinking, Mr. Koffler wrote: “He generally performs it in the morning and later reviews the day, through its perspective, at night. He has even done the full four-week program ‘probably ten times,’ though never in isolation at a retreat.” The book does not mention any Jesuit mentors or spiritual directors, though Mr .Bannon earned a master’s degree from Georgetown University’s School of Foreign Service in 1983.

Normally, the full Spiritual Exercises take place in the context of a 30-day silent retreat held in isolation at a retreat house, with the retreatant typically praying for several hourlong sessions a day, with specific meditations and Scripture passages. The retreatant maintains strict silence during the retreat, even during meals, with the exception of a once-a-day meeting with a spiritual director for up to an hour to discuss the retreatant’s experiences during the meditative prayer periods.

When asked if he had ever undertaken the Exercises with a spiritual director, Mr. Bannon replied that he had done them “on my own.”

All Jesuits undertake the full 30-day Spiritual Exercises during their first two years in the Society of Jesus, a period known as the novitiate, and then customarily do an eight-day retreat on the same principles every year. They will also do the full 30-day retreat again a few years after they have completed their training, and some Jesuits have recently started doing the retreat again later in ministry. But only rarely would anyone do the Exercises, an extremely rigorous spiritual experience, more than three times in their life.

“It is no surprise to hear that the Spiritual Exercises, and especially the examen, helped Mr. Bannon with his consumption of alcohol,” commented William Barry, S.J., a longtime spiritual director and co-author of the book The Practice of Spiritual Direction,in an email. “Many people have been helped by the spirituality of the Spiritual Exercises without making them in a formal setting. It’s more difficult that way, i.e., without a ‘spiritual director’ to talk over one’s experience. But it does happen,” he wrote. “In my own work as a spiritual director I stress, as does Ignatius, the centrality of developing a personal relationship with God, and especially with Jesus, the Son of God.”

While Mr. Bannon is described as “not quite an alcoholic” in the book, and makes no reference to Alcoholics Anonymous, there are a number of connections and parallels between that program’s famous “Twelve Steps” and Ignatian spirituality. Bill Wilson, the co-founder of Alcoholics Anonymous, had a Jesuit priest as his spiritual advisor, Father Ed Dowling, and the two often corresponded about the similar approaches of the two systems for “regeneration.”

At Father Dowling’s death, Bill Wilson called him “the greatest and most gentle soul to walk this planet” and said “I was closer to him than to any other human being on earth.” Father Dowling told his own Jesuit superiors that he saw numerous parallels between Wilson’s writings and the “rules for discernment” found in Ignatian spirituality.

“The Spiritual Exercises and the Twelve Steps are parallel,” agreed Thomas Weston, S.J., a priest who has worked with people in recovery for over 40 years, in an email to America. “[The Twelve Steps] stresses how sobriety is a gift from God, and how gratitude and service flow naturally from that. Also, Step Ten in the Twelve Steps is where one reviews his or her day, and, when wrong, promptly admits it: This is very much like the examen.”

Father Weston, however, cautioned that “quitting drinking is a little like ‘Step Zero’” for many people who have given up alcohol: “Recovery is a lifetime process, and there is a lot more to not drinking than not drinking. There is rage and rigidity, and of course isolation and arrogance [to deal with].

“What do I look for in a person who is in recovery?” said Father Weston. “Flexibility. Gratitude. Some friends. Service to others.”

An outstanding achievement for anyone. I wish Mr. Bannon well in staying the course.

Dominic Deus here. Chuck--what course is that? If Steve Bannon is doing a daily self examination, what could he possibly be finding? I'm reminded of that old saying "Some men serve best by staying drunk."

Dominic Deus
Given this comment of yours , your use of your pen name avatar is more than oxymoronic.....the again, perhaps it's just moronic!

What a load of . Steve Bannon would have his craggy face and his perpetually red nose if he had quit the bottle *19 years* ago. Not to mention that so much of his arrogant commentary and intrigues smack of one too far gone in the bottle. What is Bannon possible gleaning from any daily meditation? Perhaps to hate all, and spew venum? By their fruits you shall know them...

All good spiritual devices have their proponents who may actually have no clue as to the intent or the genuine meaning of the device. Bannon and the Examen are a perfect example. In the Exercises, St. Ignatius talks of the Presupposition: " . . . let it be presupposed that every good Christian is to be more ready to save his neighbor's proposition than to condemn it . . . if he means it badly, let him correct him with charity . . . " This man has no clue what that presupposition means, no clue. His public persona, varnished now in the veneer of one who "practices" the Examen bears no resemblance to anything Jesuit. And he's not comfortable with a spiritual director. Of course not. There he would be called to radical candor, not political/spiritual tomfoolery where his arrogance knows no boundaries. It isn't alcohol that clouded his judgment, it's his thinking. No Examen seems adequate to fix that.

Barry
I believe you provided your own self critique when you quoted Ignatius......"let him correct him [his neighbor] with charity...."
I keep rereading your comment and have yet to find"the charity".

Wow- the same arrogant Steve who has no problems or shame pushing for people to vote for a candidate who stands accused by multiple 'very young' women of having sexually harassed them- who has no shame in denying health benefits for millions- that same man has the gall to consider himself a Catholic? How to give the Church a bad name..

It seems to me that the "examine" is oriented to discovering God's will and determining to do it. It is thus looking out from one self towards others in the presence of God. This narrative strikes me as looking in at oneself to determine how to be successful in Steve Bannon's life. I am certainly happy that he was able to modify his use of alcohol but am struck by the lack of any thing in this narrative that describes how he modified his dealings with others. It suggests that he is describing a tool to remove blemishes from himself for himself. I pray that he continue his use of the examine but expand its scope in his life. We all could use a good guide in this endeavor.