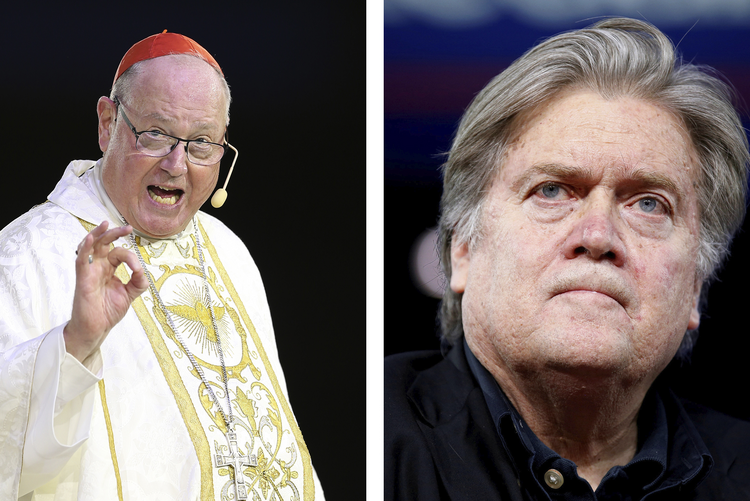 Cardinal Timothy Dolan of New York said claims by a former senior adviser to President Trump that Catholic bishops advocate for immigrants for economic benefit and to fill pews are “preposterous and rather insulting.”

Speaking to SiriusXM’s The Catholic Channel on Thursday, the cardinal dismissed the comments made to CBS News by Breitbart editor Stephen Bannon, saying “I don’t really care to go into what I think is a preposterous and rather insulting statement that the only reason we bishops care for immigrants is for the economic [incentive] because we want to fill our churches and get more money.”

“That’s insulting and that’s just so ridiculous that it doesn’t merit a comment,” he said.

Cardinal Dolan: “That’s insulting and that’s just so ridiculous that it doesn’t merit a comment.”

Earlier on Thursday, Mr. Bannon said on CBS News that he believes the Catholic Church has been “terrible” to Mr. Trump on the issue of immigration, accusing bishops of supporting immigrants out of “economic interest” and because they are “unable to really come to grips with the problems in the church.”

Cardinal Dolan emphasized that the church’s teaching to welcome immigrants comes straight from the Bible.

“The Bible is so clear, so clear, that to treat the immigrant with dignity and respect, to make sure that society is just in its treatment of the immigrant is [a] Biblical mandate,” he said on The Catholic Channel. “It’s clear in the Old Testament—my Jewish neighbors remind me of that all the time—and it’s clear from the lips of Jesus when he said, ‘Whatever you do to the least of my brothers you do to me. When I was a stranger—meaning an immigrant or a refugee—you welcomed me.’”

In another apparent response to those comments, James Rogers, chief communications officer for the U.S. Conference of Catholic Bishops, issued a statement clarifying the U.S. bishop’s position on advocacy and care for migrants and refugees.

“Our pro-immigration stance is based on fidelity to God’s word and honors the American dream.”

“Our pro-immigration stance is based on fidelity to God’s word and honors the American dream,” the statement said. “For anyone to suggest that it is out of sordid motives of statistics or financial gain is outrageous and insulting.”

The statement, which was not signed, described as “preposterous” a claim that “justice for immigrants isn’t central to Catholic teaching.”

Like Cardinal Dolan’s comments, the statement points to the bible as the basis for church teaching on immigration.

“It comes directly from Jesus Himself in Matthew 25, ‘For I was hungry and you gave me food...a stranger and you welcomed me,’” it reads. “Immigrants and refugees are precisely the strangers we must welcome.

“This isn’t Catholic partisanship,” it continues. “The Bible is clear: welcoming immigrants is indispensable to our faith.”

“The Bible is clear: welcoming immigrants is indispensable to our faith.”

Caring for and about U.S. Dreamers “is nothing more than trying to carry out that seemingly simple, but ultimately incredibly demanding, commandment.

“It is a commandment found throughout Sacred Scripture, reaching back to the Hebrew scriptures, including Leviticus, “when an alien resides with you in your land, do not mistreat such a one” (Lv. 19:33).

According to the U.S.C.C.B. statement, the witness of the U.S. Catholic bishops on issues “from pro-life to pro-marriage to pro-health care to pro-immigration reforms is rooted in the Gospel of Jesus Christ rather than the convenient political trends of the day.”

“We are called not to politics or partisanship, but to love our neighbor,” it continues. “Let’s reject the forces of division that insist we make a false choice between our safety and our humanity. It is both possible and morally necessary to secure the border in a manner which provides security and a humane immigration policy.”

It's shocking that too many Catholics believe that the Church is out of its depth when it tackles social issues like poverty. I've heard it preached from the pulpit that Catholics must not vote for any candidate who favors abortion but that on economic issues there are a range of solutions and Catholics are free to decide what solution they prefer. The trouble of course is that many of the solutions in play these days are seriously detrimental to the poor. How is it possible that those solutions (like the current one on the Dreamers) are not morally bankrupt and in need of condemnation with as much moral force as is applied to therapeutic abortions?

I agree that assisting the many millions of poor people is important, both in terms of government programs that are effective, as well as houses of worship, community groups, and individuals doing their part to provide assistance to those living in poverty. As someone who worked in the past with several immigrants from Liberia who fled to our nation to escape from a brutal civil war, I certainly hope that Congress passes a bill to protect the rights of "dreamers" and that President Trump signs the bill into law. However, I'm confused by your reference to "therapeutic abortions." I thought after 44 years since the Supreme Court's Roe v. Wade and Doe v. Bolton abortion decisions, that it was well known that the violence of abortion is legal for any reason, up until when the unborn infant (or fetus, which means "young one" in latin) is viable. I certainly don't claim to be able to give to every worthwhile charity in need (and they are innumerable) but I do give to a variety of good charities each month. How should we both as individual Catholics and the government respond to the needs of poor people? I do believe that all people (hopefully not only Catholics) who have the means will contribute to worthwhile charities to assist the poor, the disabled, the homeless, and many others in need. Regarding the government, I believe the government has a great responsibility to fund anti-poverty programs, as well as promoting measures to improve our economy so that unemployment remains low. However, I do believe that candidates who favor the violence of legal abortion are disqualified from holding office. If a candidate who is pro-life/anti-abortion has reasonable positions on most other issues of great importance, then I believe such a man or woman deserves our votes. I believe that the restoration of legal protection to the maximum degree possibble to innocent unborn human beings is if paramount importance. There are about 1 million abortions anually in our nation. Both through the law as well as pro-life agencies which provide compassionate, practical aid to oregnant women are, in my opinion, the means to restore tye right to life, the most important right. Without the right to life, no other rights can be exercised. I certainly believe that if an individual feels that a pro-life/anti-abortion candidate isn't quakifued, that it's valid to abstain from voting if his or her opponent favors legal abortion.

A healthy cynicism about bishops is not unwarranted but not on the issue of immigrants. “Dagger” John Hughes of New York is famous for his comment that if the Know-Nothings attempted to destroy any Catholic institutions, New York City would burn like Moscow. I was more than pleasantly surprised, indeed wrote a letter to the archdiocesan newspaper applauding him, when Cardinal Dolan offered his very strong statements about Trump’s DACA rescission. On this issue, like so many others, Bannon is in his own world, a long ago reality that thankfully disappeared in the not-so-distant past and which hopefully will never exist again. The saddest part is that his opinions are condoned and held by a unique segment of“good Catholics”, a dying breed to be sure, but in the meantime, like the dinosaurs, still slamming their tails against the ground to which they will become fossils.

It is interesting that Hispanics in the US are leaving the Catholic Church faster than Anglos! They are largely migrating toward Evangelical Protestantism, have a more negative view of abortion than Hispanic Catholics and are 50% more likely to affiliate with the Republican party. Pew: http://www.pewforum.org/2014/05/07/the-shifting-religious-identity-of-latinos-in-the-united-states/