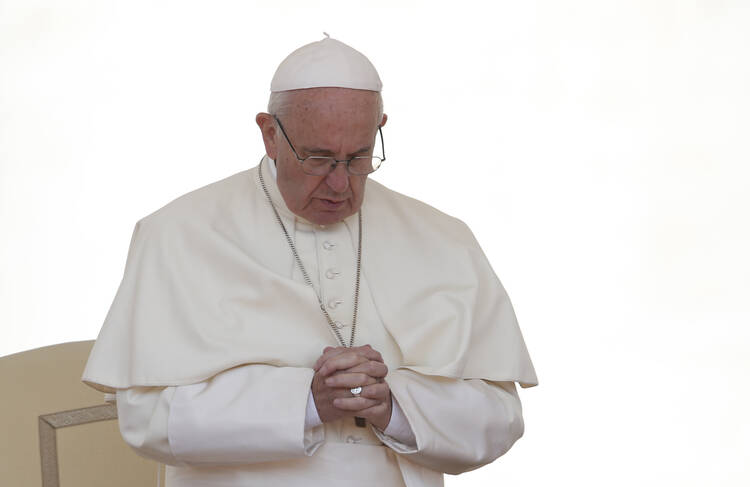 Pope Francis has denounced yesterday’s terrorist attack in New York, where eight people were killed, including five from his native Argentina, as well as the attacks days ago in Somalia and Afghanistan that killed and injured hundreds. He said he prayed for all the dead and those injured, as well as their families.

“I am deeply saddened by the terrorist attacks of these last days in Somalia, Afghanistan and yesterday in New York,” Pope Francis said Nov. 1, when he greeted pilgrims in St. Peter’s Square. “Deploring these acts of violence, I pray for the dead, for the wounded and their families.

“I call on the Lord that he may convert the hearts of the terrorist and free the world of hate and that crazy homicide that abuses the name of God to disseminate death.”

Thousands of pilgrims applauded his words in solidarity with the victims of the attacks.

Five of those killed in New York were men from the city of Rosario, Argentina. They had come to New York with five other friends to celebrate the 30th anniversary of their graduation from high school, but they died in lower Manhattan when Sayfullo Saipov, 29, an Uzbekistan national, intentionally drove a truck into the bicycle lane, killing them and three others and wounding several people.

“I call on the Lord that he may convert the hearts of the terrorist and free the world of hate and that crazy homicide that abuses the name of God to disseminate death.”

The deaths in New York were but the latest in series of terrorist attacks over the past two weeks, as the pope told pilgrims after reciting the Angelus with them in St. Peter’s Square on Nov. 1, the Feast of All Saints, which is a holiday in the Vatican and in Italy. The other attacks took place in Somalia and Afghanistan and reaped an even more deadly harvest of dead and injured.

Last Saturday, Oct. 28, terrorists carried out a double truck bombing in Mogadishu, the capital of Somalia, that killed more than 270 people and injured over 300 people. It came as the United States renewed its efforts to defeat the Shabab, the Somali-based militants, some with links to the Islamic State or Al Qaeda, that have wreaked terror and havoc on this country of 11 million people as well on other parts of East Africa for many years.

The following day, Oct. 29, the Taliban killed 13 police officers at a security checkpoint in Khan Abad, in the north of the country. On Oct. 19, Taliban militants killed 43 Afghan soldiers after an attack on an army camp in the southern province of Kandahar. Two days earlier, Oct. 17, they killed at least 80 people and injured some 300 others, including soldiers, police officers and civilians, in suicide and gun assaults on government forces in the southern province of Paktia. The attacks came as the Western-backed Afghan government struggles to defeat the insurgents after NATO forces left the country in 2014.

Pope Francis concluded his encounter with the pilgrims and Romans by announcing that on All Souls Day, Nov. 2, when the church and people around the world remember their dead relatives and friends, he will visit the U.S. cemetery at Nettuno, where many American soldiers who were killed by the Nazis in their effort to liberate Italy are buried. He said he will also visit the Ardeatine graves on the outskirts of Rome, where the Nazis massacred 335 Italians in reprisal for an attack on Nazi soldiers in the eternal city. He said he will visit both sites on a journey “of memory and prayer for the victims of war and violence.”

Then in a message to the wider world and to political leaders, Pope Francis said: “Wars do not produce anything except cemeteries and death. This is the reason why I wished to give that sign at a moment when humanity seems not to have learned the lesson, or does not want to learn it.”

May true peace visit all in New York, Somalia and Afghanistan.