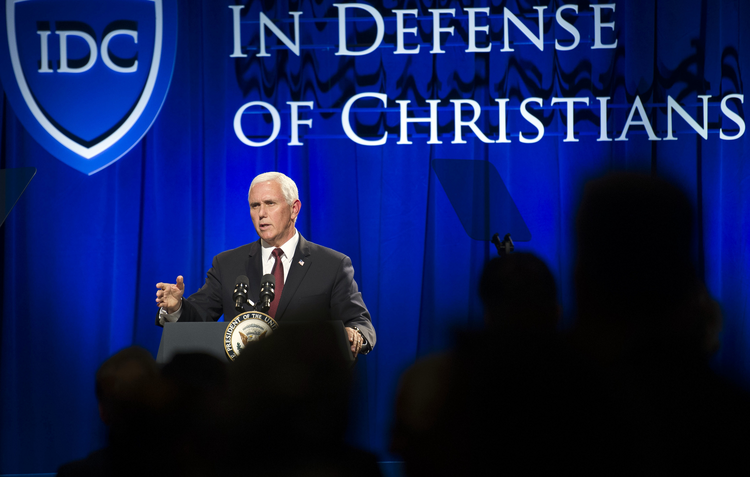 Saying that Middle Eastern Christians facing persecution have not been served well by the United Nations, Vice President Mike Pence announced on Wednesday that the Trump administration will direct money away from the international body and instead disperse it to faith-based and other nonprofit organizations.

“Our fellow Christians and all who are persecuted in the Middle East should not have to rely on multinational institutions when America can help them directly,”the vice president said at a summit in Dallas hosted by In Defense of Christians, a D.C.-based nonprofit that advocates for Christians living in the Middle East.

“And tonight, it is my privilege to announce that President Trump has ordered the State Department to stop funding ineffective relief efforts at the United Nations,” he continued. “From this day forward, America will provide support directly to persecuted communities,” through the United States Agency for International Development, or USAID.

Carl Anderson, the head of the Knights of Columbus who has previously met with the vice president to discuss anti-Christian persecution, welcomed the news.

“The Knights of Columbus applauds Vice President Mike Pence’s announcement that the Trump administration will begin providing aid directly to religious minority groups impacted by ISIS’ genocide,” Mr. Andersonsaid in a statement on Thursday. “For almost two years, the K of C has warned that Christians and other religious minorities in the Middle East have been falling through the cracks in the aid system, and has been urging the United States government to provide aid directly to genocide-targeted communities.”

Mr. Pence’s announcement lacked specifics about how much money would be funneled away from the United Nations or about which groups might receive increased funding from USAID. He said “faith-based groups with proven track records and deep roots in these communities are more than willing to assist,” but “the United Nations too often denies their funding requests.”

“My friends, those days are over,” he said.

During a press conference on Thursday, State Department spokeswoman Heather Nauert said “details are still being worked out” and that the Trump administration is continuing the policies of previous presidencies in not wanting to “shy away from funding religious-based N.G.O.s.” She said that even with cuts to U.N. programs, the United States will remain “the most generous, largest humanitarian donor in the world.”

“The U.N. will still get some of its money for this, but we will look for other avenues in which to more efficiently fund these types of religious minorities so that they can eventually return back home,” she said. “This [policy] does not apply to all U.N. programs. It applies to programs that address the persecuted and displaced religious minority communities.”

Ms. Nauert said she was unable to provide data supporting claims that U.N. programs are inefficient and said she was unsure how much money would be diverted.

Earlier this year, the president proposed sharp cuts to USAID, which in fiscal year 2016 spentabout $19 billion on international aid, equivalent to less than 1 percent of the United States’ total budget. Mr. Pence did not address the potential cuts during his speech.

While it is unclear when changes may come, one organization that could benefit is Catholic Relief Services, the overseas charitable arm of U.S. bishops. In fiscal year 2015, C.R.S. receivedclose to $240 million for its work, making it one of the largest recipients of money from USAID. (According to the same report, USAID gave about $2.4 billion to three U.N. agencies that year.)

A representative from C.R.S. said the organization was studying Mr. Pence’s announcement and that it could not comment on specifics, but she reiterated that C.R.S. helps vulnerable people regardless of religious belief.

“Christians and other minorities, including Yazidis and Muslim minorities, are suffering greatly from conflicts in the Middle East. Based on C.R.S.’s mission to assist the most vulnerable around the world, we provide this assistance based on need, not creed,” Nikki Gamer, a spokeswoman for Catholic Relief Services, told America. “C.R.S. has provided humanitarian aid to millions of people of all faiths in the Middle East.”

““The Jesuit Refugee Service/USA has long advocated for robust humanitarian assistance,” Giulia McPherson, director of advocacy and operations, said in a statement to America. “The U.S. makes vital contributions to the operations of humanitarian organizations including the UN Refugee Agency (UNHCR), which helps sustain millions of refugee lives every day. This funding is essential to saving lives, and building a better world for people of all faiths and traditions.”

Shaun Casey, a former State Department official who now heads the Berkley Center for Religion, Peace, and World Affairs at Georgetown University, toldThe Atlantic he believes the policy change is an attempt to divert attention away from the proposed cuts to international aid, by appeasing Christian conservatives who form Mr. Trump’s political base.

“They could absolutely devastate the global USAID budget, but if they come up with $10 million to put in the hands of a group of conservative Christian N.G.O.s on the ground, that’s how they’re going to take credit,” he said.

During his address, Mr. Pence painted a bleak picture of Christians living in the Middle East,a frequent theme in his talks. He also announced he would visit Egypt and Israel in December.

“In Egypt, we see the bombing of churches during Palm Sunday celebrations—a day of hope transformed into a day of horror,” Mr. Pence said. “In Iraq, we see monasteries demolished, priests and monks beheaded, the two-millennia-old Christian tradition in Mosul clinging for survival. In Syria, we see ancient communities burned to the ground, believers tortured for confessing Christ, and women and children sold into slavery.”

He promised that the United States would continue to fight terrorist groups “on our terms, on their soil.”

“Let me assure you tonight, President Trump and I see these crimes for what they are—vile acts of persecution animated by hatred for Christians and the Gospel of Christ,” the vice president continued. “And so too does this president know who and what has perpetrated these crimes, and he calls them by name—radical Islamic terrorists.”

He acknowledged that people of other faiths, including Muslims, also suffer the effects of terrorism in the Middle East, but he said terrorists “harbor a special hatred for the followers of Christ. And under the unwavering attacks, Christianity now faces an exodus in the Middle East unrivaled since the days of Moses.”

Absent from the vice president’s Oct. 25 speech was the Trump administration’s stance toward refugees from some of the countries where Christians are facing some of the violence he spoke about, including Iraq, Syria and Egypt. Though the vice president said in his speech “America will support these people,” meaning Christians and other religious minorities facing persecution in the Middle East, the day before, on Oct. 24, the administration announced stricter restrictions for refugees wanting to come to the United States from 11 countries. Though the countries were not named, news agency Reuters reported that they were mostly from the Middle East and Africa, which in the past included many persecuted Christians seeking refuge in the U.S.

In late September, Bishop Joe S. Vasquez of Austin, Texas, who is chairman of the U.S. Conference of Catholic Bishops’ Committee on Migration, voiced objections about the low level of refugee admissions under Trump, who will limit the number of refugees the United States accepts to 45,000 for the upcoming fiscal year.

It is the lowest admission level for persons fleeing persecution that the United States has accepted since the 1980s, when the executive branch was allowed to set the caps under the Refugee Act.

Good luck with that. Poor and marginalized Christians in the U.S. aren't even being taken care of. A special thanks to the Supreme Knight for helping Trump get elected. We have heard so many lies who can believe anybody in this administration.

A key point in the article - "Mr. Pence’s announcement LACKED SPECIFICS about how much money would be funneled away from the United Nations or about which groups might receive increased funding from USAID." Are peaceful/persecuted Jewish and Muslims included in this aid? All Trump initiatives lack specifics.

Mr. O’loughlin, as a good national correspondent, you are aware that we readers will expect you to follow up with the State Department relentlessly until you find out the specifics of this strategy, and then follow up equally relentlessly with the execution ( or perhaps quiet abandonment) of it.