Myanmar army killed at least hundreds of Rohingya, according to Amnesty International report:

Myanmar army killed at least hundreds of Rohingya, according to Amnesty International report: 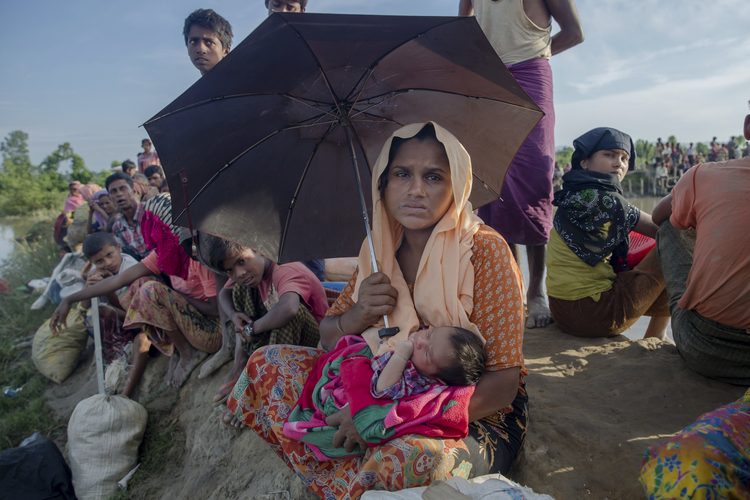 A newly arrived Rohingya Muslim woman Anjuna Khatoon, 23, holds her 5-day-old baby girl who she gave birth to while making the journey to cross the border from Myanmar to Bangladesh, at Palong Khali, Bangladesh, Tuesday, Oct. 17, 2017. Thousands more Rohingya Muslims are fleeing large-scale violence and persecution in Myanmar and crossing into Bangladesh, where more than half a million others are already living in squalid and overcrowded camps, according to witnesses and a drone video shot by the U.N. office for refugees. (AP Photo/Dar Yasin)

BANGKOK (AP) — Myanmar security forces killed hundreds of men, women and children during a systematic campaign to expel Rohingya Muslims, Amnesty International said in a new report Wednesday that calls for an arms embargo on the country and criminal prosecution of the perpetrators.

More than 580,000 refugees have arrived in Bangladesh since Aug. 25, when Myanmar security forces began a scorched-earth campaign against Rohingya villages. Myanmar's government has said it was responding to attacks by Muslim insurgents, but the United Nations and others have said the response was disproportionate.

The continuing exodus of Rohingya Muslims has become a major humanitarian crisis and sparked international condemnation of Buddhist-majority Myanmar, which still denies atrocities are taking place.

Based on interviews with more than 120 fleeing Rohingya, Amnesty International said at least hundreds of people were killed by security forces who surrounded villages, shot fleeing inhabitants and then set buildings alight, burning to death the elderly, sick and disabled who were unable to flee.

In some villages, women and girls were raped or subjected to other sexual violence, according to the report.

The witnesses repeatedly described an insignia on their attackers' uniforms that matched one worn by troops from Myanmar's Western Command, Amnesty International said.

The 33rd Light Infantry Division and border police, who wear a distinctive blue camouflage uniform, were also frequently involved in attacks on villages, along with Buddhist vigilante mobs, witnesses said.

Matthew Wells, an Amnesty crisis researcher who spent several weeks at the Bangladesh-Myanmar border, said the rights group plans to issue another report in the coming months examining individual criminal responsibility, including specific commanders and others that may be involved in abuses.

He said hundreds of Rohingya have been treated for gunshot wounds and doctors say that the injuries are consistent with people being shot from behind as they fled.

There were credible indications that a total of several hundred people had been killed in just five villages that were the focus of Amnesty's reporting. Wells said that given that dozens of villages across northern Rakhine State have been targeted in a similar fashion, the death toll could be much higher.

He said satellite imagery, corroborated by witness accounts, show that Rohingya homes and mosques have been burned entirely in villages, while non-Rohingya areas just one or two hundred yards (meters) away were untouched.

"It speaks to how organized, how seemingly well-planned this scorched-earth campaign has been by the Myanmar military and how determined the effort has been to drive the Rohingya population out of the country," Wells said.

Myanmar military's scorched-earth campaign is "organized," "well-planned," and "determined to drive Rohingya population out of the country."

Among almost two dozen recommendations, the human rights group called for the U.N. Security Council to impose a comprehensive arms embargo on Myanmar and financial sanctions against senior officials responsible for violations that Amnesty says meet the criteria for crimes against humanity.

It said the council should explore options for bringing the perpetrators to justice under international law if Myanmar authorities do not act swiftly.

"It is time for the international community to move beyond public outcry and take action to end the campaign of violence that has driven more than half the Rohingya population out of Myanmar," Amnesty said.

Witnesses and a drone video shot Monday by the U.N. refugee agency show that Rohingya are continuing to flee persecution in Myanmar and crossing into Bangladesh.

The video showed thousands upon thousands of Rohingya trudging along a narrow strip of land alongside what appears to a rain-swollen creek in the Palong Khali area in southern Bangladesh. The line of refugees stretches for a few kilometers (miles).

Amnesty International on Rohingya persecution: "It is time for the international community to move beyond public outcry and take action."

The new wave of refugees started crossing the border over the weekend, witnesses said. An Associated Press photographer saw thousands of newcomers near one border crossing Tuesday. Several said that they were stopped by Bangladeshi border guards and spent the night in muddy rice fields.

Nearly 60 percent of the refugees are children. The U.N. children's agency, UNICEF, warned Tuesday that without immediate additional funding, it will not be able to continue providing life-saving aid and protection to Rohingya children. UNICEF said it has received just 7 percent of the $76 million it needs.

Exclusive: Cardinal Bo describes Myanmar’s difficult path to democracy
Gerard O’Connell
On Aug. 25, a Rohingya insurgent group known as the Arakan Rohingya Salvation Army attacked at least 30 security posts on Aug. 25, causing dozens of casualties, according to Myanmar authorities. The brutal attacks against Rohingya that followed have been described by the U.N. as "textbook ethnic cleansing."

Buddhist-majority Myanmar has denied citizenship for the Rohingya since 1982 and excludes them from the 135 ethnic groups officially recognized, which effectively renders them stateless. They have long faced discrimination and persecution with many Buddhists in Myanmar calling them "Bengalis" and saying they migrated illegally from Bangladesh, even though they have lived in the country for generations.