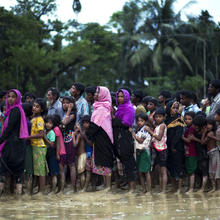 YANGON, Myanmar (AP) — For generations, Rohingya Muslims have called Myanmar home. Now, in what appears to be a systematic purge, the minority ethnic group is being wiped off the map.

After a series of attacks by Muslim militants last month, security forces and allied mobs retaliated by burning down thousands of Rohingya homes in the predominantly Buddhist nation.

More than 500,000 people — roughly half their population — have fled to neighboring Bangladesh in the past year, most of them in the last three weeks.