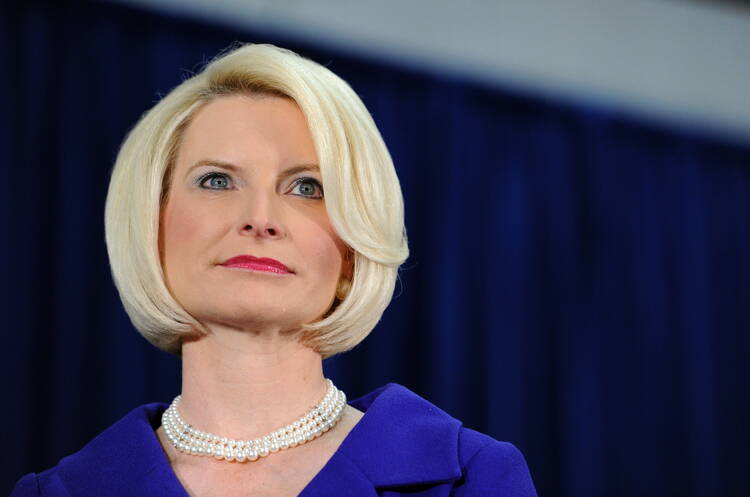 Following the vote, the U.S. embassy at the Vatican tweeted a congratulatory message:

Good news! @CallyGingrich was confirmed as the next US Amb to the Holy See. We look forward to seeing Amb-Designate Gingrich in Rome soon. pic.twitter.com/cUqB3aIBDT

During her confirmation hearing in July, Ms. Gingrich said that as ambassador she would focus on issues of shared concern between the United States and the Vatican, like combating human trafficking and condemning terrorism.

But she struggled to respond to questions about the encyclical “Laudato Si’,” one of the most important documents of Pope Francis’ four-year papacy about the need to protect creation. Instead, she said that, should she be confirmed, she would focus on advancing global religious liberty, combating terrorism and human trafficking and fighting diseases such as H.I.V./AIDS and Ebola.

Ms. Gingrich said that as ambassador she would focus on issues like human trafficking and terrorism.

During the president’s visit to Rome earlier this year, Vatican officials had lobbied, unsuccessfully, for Mr. Trump not to withdraw the United States from the Paris climate accords.

A pair of Democratic senators who last month faced charges of anti-Catholic bias during a hearing for a judicial nominee split their votes on Monday.

Ms. Gingrich will be the 10th U.S. ambassador the Holy See and the third woman to hold the position, which President Ronald Reagan first filled in 1984.

Ms. Gingrich is a lifelong Catholic and a member of the choir at the Basilica of the National Shrine of the Immaculate Conception in Washington, D.C. She has co-produced documentaries about Pope John Paul II and she has written children’s books about government.

She met her husband, former House Speaker Newt Gingrich, when she was a congressional aide in the 1990s. The pair began dating when Mr. Gingrich was still married to his previous wife. He has said that Callista is responsible for his conversion to the Catholic faith.

Ms. Gingrich has frequently expressed her admiration for Pope Francis on social media, and she was present at several events during his visit to the United States in 2015.

Michael O’Loughlin is the national correspondent for America and author of  The Tweetable Pope: A Spiritual Revolution in 140 Characters.

I met Mrs. Callista Gingrich at a Christmas concert where she sang with her Basillica choir at our local Cathedral. She seemed poised, elegant and sang quite well. We spoke briefly about our local cathedral. Her husband, Newt, sat in the front pew during the concert and I chose to avoid approaching him. The angels were hiding behind his pew and I figured I would follow their lead

What an embarrassment. I am disappointed that the Vatican has accepted her credentials. She is clearly not qualified for the post.

Good news? For whom? I'm curious if Newt is going to Rome with her. If so, I would be curious as to what Cardinals he seeks out.

On what basis did Mr. Gingrich get an annulment from his first wife? Even though he was not nominated as Ambassador, certainly his role as spouse plays a role. Was his "conversion" before or after the marriage? When I first heard of Mrs. Gingrich's nomination, I thought that this nomination was a poke in the eye of the Church - not because of her qualifications, but because of his public behavior.

This is Newt's third marriage, so may one presume there were two annulments? Or perhaps one marriage was certified at a civil courthouse? He and his third wife carried on an affair for six years, starting when she was a 20-something stafferon the House Agricultural Committee. Like so many men experiencing their mid-life crises, he chose a woman half his own age. Three marriages seem to be par for the course in Trump's world (Trump, of course, Mnuchin, Gingrich, Scaramucci and others) It's most likely a two-fer in Trump's mind. Newt didn't get the VP slot, or an important Cabinet position, but he remains a reliable apologist for Trump, no matter how many lies his boss tells. So, Rome gets Newt out of town and far away from the DC press corps, while giving him a nice reward for his loyalty. Callista has no real qualifications for the job, but that is irrelevant to both the DC and Vatican power players. All of those Catholics that are having strokes over Francis advocacy of mercy for the divorced and remarried are willing to calm their angry hearts if it's one of their own who is the beneficiary. Quite sure Francis sees right through this little ploy, but he will make the best of it rather than refuse her.
https://www.washingtonpost.com/opinions/callista-gingrichs-nomination-to-the-vatican-stinks-to-high-heaven/2017/07/18/e131b34e-6bf5-11e7-96ab-5f38140b38cc_story.html?utm_term=.f166741ae7ef

His first wife is dead. He asked for an annulment of his 2nd marriage on the basis of his 2nd wife's having previously been married. Which honestly strikes me as ridiculously convoluted, but I guess they granted it.

As far as I can see, she has no ambassadorial experience. And she and Newt had an affair for seven years while Newt was still married to his second wife. Hardly exemplars of Catholic morality. But, for some Catholics, "correct politics" covers over all sins.

My comments are informed by over 30 years of ministry in the Roman Catholic Church. I am angry and embarrassed that a woman, especially one who held a visible position in the church has been appointed to this position. She is not representative of the folks in the pew, the
people whom I served in parishes in 3 different states. People can and will forgive many things, and saying that she "dated" her husband while he was still married to his 2nd wife is a euphemism at best. The hypocrisy continues to both sadden and anger me.