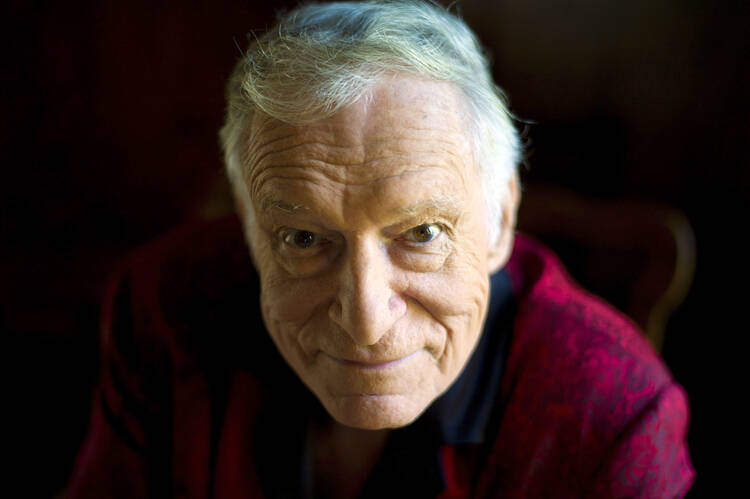 Hugh Hefner is dead, and pray for him—and the countless millions whom his ghoulishness affected directly and indirectly. His life was dedicated to not only personal sin but to shaping society in directions diametrically opposed to everything that Catholicism stands for, from the capitalistic commodification of the body to his celebration of libertinism and the exploitation of women.

Some might point out that Playboy is now positively tame compared to the pornographic horrors that followed it, but Playboy paved the way. Some might find some redeeming value in Playboy’s aspirations to sophistication and intellectualism, but New Testament values suggest that a veneer of bourgeois respectability makes depravity worse, not better. It is impossible to improve on Ross Douthat’s justly fire-breathing send-off. As he writes, without Hefner the sexual revolution would still have happened, but he still made it worse in every way he could. Though perhaps a few things should be added.

Hef the man stopped mattering to the culture decades ago, but Hef the symbol still does. The willingness of some of our cultural elites to offer tributes to Hefner without grappling with his obvious opposition to the progressive and feminist values they espouse reveals a very different set of values actually at work. From a progressive perspective, what does this unabashed capitalist have to recommend himself? Why should a feminist admire a man who used drugs to ply women? If our cultural elite’s actual values, instead, are hedonism and will-to-power, and progressivism and feminism are only used as a convenient mask for these, then Hefner is definitely one of them.

Hef the man stopped mattering to the culture decades ago, but Hef the symbol still does.

I do not mean that as as much of an indictment as you might think. Hedonism and will-to-power are the basic temptations of man, and every elite everywhere will find itself indulging in them more, twisted by them more, and every elite everywhere will come up with justifications for these pursuits, often sincerely believing those excuses at least to some extent. We do not need to point to Hollywood to show that power corrupts and creates a slippery slope to depravity and exploitation. We need only to read the Bible or remember church history, including recent history.

It is still worth noting that this is the way the world works. I do believe, profoundly, that ideas have consequences, that they even change the world. But it is also the case that ideas are often simply window-dressing for self-interest or primal urges. Those realities co-exist, not only at the social level but at the individual level, since we scheming swindlers are masters of self-deception. This reality helps to explain some of the contradictions in progressive argument: the family was an oppressive bourgeois institution that needed to be transcended, until it was so good that its definition needed to include same-sex couples. Human rights are universal and science must always be approved, but unborn children have no rights, and it is a great mystery when life begins. The incoherences mark a deeper coherence: the need to remove all barriers to expressive individualism.

Hef was a caricature of misogyny, but he had the right enemies, so feminists earnestly celebrate him anyway.

I never liked Pope Benedict XVI’s phrase “the dictatorship of relativism.” The movement for, say, same-sex marriage, was a moral crusade for a specific vision of the good, with no trace of indifferentism, that bogeyman of 19th-century popes. Arguments in the vein of “Why should you care if it does not affect you?” were side-skirmishes, never the main event. But Benedict’s phrase does reflect the way in which philosophical premises become instruments for a deeper struggle. Hef was a caricature of misogyny, devoted to the cause of the degradation of women, but he had the right enemies and advanced the cause of expressive individualism, so feminists earnestly celebrate him anyway.

Still, Hef did not happen in a vacuum. “The modern world is full of the old Christian virtues gone mad,” G. K. Chesterton famously wrote. I would amend this. I think the modern world is full of old Christian ideas that the church forgot. Atheists picked up those ideas and ran with them and took them too far or in destructive directions. And I believe recognizing this is the key to grappling with modernity. Too many Catholics see, or at least portray, the sexual revolution as a sudden, uninvited earthquake in a peaceful quasi-utopia. We will never be able to respond correctly to modernity without understanding how what is “mad” about it is a response to our earlier failures. For centuries, the church forgot that L.G.B.T. people are beloved children of God with the same infinite dignity as anybody else. Is it any wonder that nobody will listen to us now on those issues?

Today, certain Catholics will fall over themselves to follow John Paul II in emphasizing that Catholic doctrine is not anti-sex, not anti-body, that sex is good and holy, and that it is precisely because it is so good and holy that the church has so many rules around it. And amen to that. Not only that, we are informed, but this has always been the doctrine of the church, since doctrine is eternal and unchanging. The implication is that anyone who thinks there is anything more than a incidental relationship between Christianity and prudishness is just gravely misinformed. Let’s not kid ourselves. What would have been the results of a global poll asking weekly Mass-going Catholics what the church teaches about sex, circa 1850? Or 1950?

The ideal female body for Hef is not a body at all; it is an iPhone: smooth, featureless, plastic and colorless.

Forgive me for being French for one second: I think the thing that repels me most about Hef is not just that he turned the female body into an object to be bought and sold; it is that he turned it into an ugly object to be bought and sold. The ideal female body for Hef is not a body at all; it is an iPhone: smooth, featureless, plastic, colorless, odorless, tasteless. I suppose it makes sense that a glutton would move from an appreciation of fine food to gorging on junk. But like the stereotype of the teenage son who turns into his father through the very process of rebelling against him, Hef became not the opposite but the mirror of the (largely Anglo-Protestant) body-hating puritanism that preceded him.

How the Jesuits at ‘America’ responded when Hugh Hefner sent them copies of ‘Playboy’
James T. Keane

A Playboy centerfold bears the same relationship to the female body as a Victorian image of a woman dressed in all black up to her neck and down to her wrists and ankles: a superimposition of projected male pathology that erases God-given beauty, specificity, desirability, creating a body that is no longer a body but an idea. Men will always be drawn to pornography, but only a society that had already been trained in a subconscious, Gnostic contempt for the body and especially the female body, could have responded positively to the Playboy aesthetic. And the training was done by professing Christians, without notable alarm from the church at the time.

I am not invoking “take the beam out of your eye”—in this specific instance, the beam is indisputably in the neighbor’s eye. But I would like to invoke “be perfect as your Heavenly Father is perfect.” Every story about the madness of modernity is also a story about a failure of the church, and if our objective is to be to “speak truth in love,” we must never forget it.

Pascal-Emmanuel Gobry is a contributing writer for America.

"Every story about the madness of modernity is also a story about a failure of the church, and if our objective is to be to “speak truth in love,” we must never forget it."

Exactly. THank you Pascal-Emmanuel. You express well what I understand as the truth that the Church brings to the world.
If the Church Is to have any relevance to the modern world it must speak its truth - not in a condemnation of our bodily sexuality, but to its sacredness. THIS is where we will find the Christ, in the least among us and in our own bodies, as they are. Human life, our bodies, are good and holy. THIS is why we are against abortion, war, the death penalty, guns. THIS is why objectifying a woman's body is so utterly wrong. Because bodies are SACRED. Every body, every life.

What ever happened to the Theology of the Body that St. John Paul 2 proposed awhile back?

As a gay Catholic, I find myself in an unusual position regarding this column. Regrettably, I have viewed gay pornography, but know like "straight" pornography that it involves treating people as objects. Both are exploitation of human beings, in my view, and in my case, were portals of having sex with men some years ago. I have regretted both acts, and have confessed these immoral acts to a compassionate priest in the Sacrament of Reconciliation . I still struggle with the temptation to view pornography, but was wisely advised by my pastor to pursue wholesome activities. For me, these include reading good books watching good television shows and movies, and doing my best to help my family and friends in whatever way possible. I agree with you wholeheartedly about how we should treat all human life with respect, both before as well as after birth.

I also liked that phrase regarding the failures of the Church. To realize this is to realize the very special thing that the Church is. It shows us what catholicity is, and why the Church ought to be a mother, merciful, inclusive.

"Jesuitical" in the bad sense is the word to describe the following statement: "[O]nly a society that had already been trained in a subconscious, Gnostic contempt for the body and especially the female body, could have responded positively to the Playboy aesthetic." Uh, no. Responding to the Playboy aesthetic meant no more than getting an erection while looking at images of naked women. It took no "training" at all.

I never thought Hugh Hefner was important in any way. He was a purveyor of girlie magazines and was more silly than anything else.