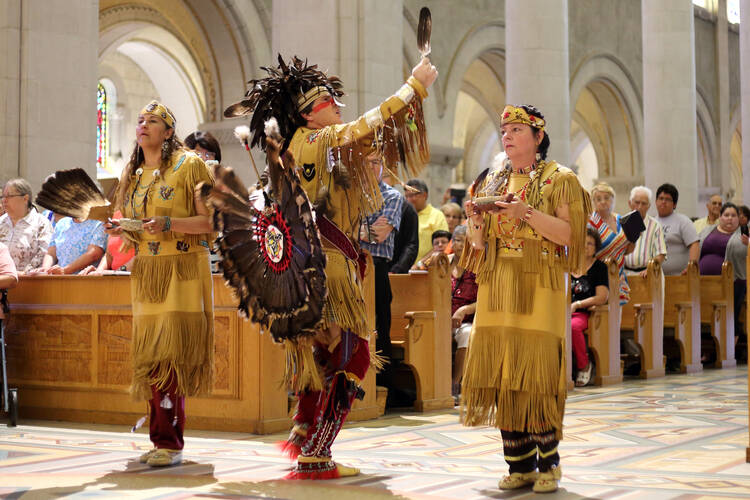 Members of the Huron-Wendat Nation perform a purification ritual at the Basilica of Sainte Anne-de-Beaupre in Quebec June 26. (CNS photo/Philippe Vaillancourt, Presence)

OTTAWA, Ontario (CNS) – Whether Pope Francis comes to Canada or not, indigenous relations remain a top priority for Canada's bishops, said the newly elected president of the Canadian Conference of Catholic Bishops.

Bishop Lionel Gendron of Saint-Jean-Lonueuil, Quebec, said a possible papal visit was not a major topic at the bishops' plenary gathering Sept. 25-29, but reconciliation with indigenous people remains high on the conference's agenda.

The commission, which ended its work in 2015, detailed the treatment of aboriginal children in residential schools supported by the Canadian government but administered by religious organizations, including the Catholic Church.

That represents a change, he explained, saying, "The Spirit has done great things among us and is helping us. We were discussing so many things not according to the Gospel and mission as bishops."

But now the focus has shifted to reconciliation with an awareness of what First Nations people "have suffered and are suffering," he said.

As for a possible visit by the pope, Bishop Gendron said the bishops are in a process of "accompaniment and discernment," to find out what the "Spirit is asking of us at this moment" from a "pastoral point of view."

Archbishop Bolen: The Bishops are "engaging as deeply as ever in its history with indigenous relations. It's a priority."

Archbishop Donald Bolen of Regina, Saskatchewan, who was the most outspoken in favor of a papal visit among the western Canadian bishops when they made their ad limina visits to Rome last spring, said he is pleased with the direction the bishops' conference is taking.

"I think the conference is engaging as deeply as ever in its history with indigenous relations. It's a priority. It occupies our time and energy and we're making steps together," he said.

"I don't know that I could have said that a year ago," he added.

While indigenous relations and reconciliation remain major priorities for the bishops "the part Pope Francis will play on this has to unfold on the Holy See side of things and unfold in discussions over time," Archbishop Bolen said. "Our focus isn't reduced to the role of Pope Francis."

Instead, the CCCB is "investing, time, energy, commitment" and resources to reconciliation, and it is yet to be determined exactly "what shape that takes," he said.

One area the Canadian bishops are focusing on is supporting the six dioceses and archdioceses of Canada's North: Whitehorse, Yukon Territory; Mackenzie -- Fort Smith, Northwest Territories; Churchill – Hudson Bay, Manitoba; Moosonee, Ontario; Grouard -- McLennan, Alberta; and Keewatin - Le Pas, Manitoba. They once were missionary dioceses under the Vatican's Congregation for the Evangelization of Peoples, but are now normal dioceses.

"We are building relationships with these northern dioceses and their peoples on a level that has never happened before and that's a beautiful thing," Archbishop Bolen said. "In my diocese and every diocese, good discussions are going on on what it means to be in relationship, or be a twin with a diocese or part of a diocese. There's some excitement about this. It's not seen as a burden, but it's about a relationship we didn't have or only had in a minimal way."