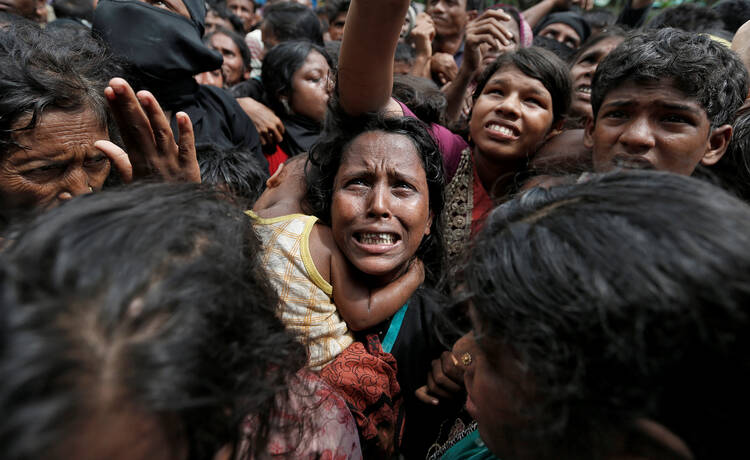 In May 2016 delegates concluding the first U.N. World Humanitarian Summit in Istanbul, Turkey, produced what has been called the Grand Bargain on the treatment of the world’s refugees. Just a few months later at the U.N. General Assembly 2016 in New York, the New York Declaration expressed the renewed commitment of world leaders to save lives and to share responsibility for people put to flight by calamity or conflict.

Like a number of other international reappraisals on the status of refugees issued last year, the declaration and the Grand Bargain augured a new approach toward a coordinated and equitable humanitarian response to various refugee crises, with an emphasis on information and resource sharing, social integration, rapid and sustained assistance to host nations, transparency, and the inclusion of the refugees themselves in the decisions that would affect their lives.

Last year it was possible to be optimistic that the international community could indeed step up to that reinvigorated commitment to share the burden of an unprecedented humanitarian crisis—66 million people displaced around the world.

But even as thousands of new refugees clamor to escape the killing in Iraq and Syria or flee famine, poverty and violence in Africa or Central America, nativist sentiment in both the United States and Europe is on the rise, and an abrupt turnabout on refugees and immigrants since the election of President Donald Trump has changed the political landscape in Washington. This year the Grand Bargain seems increasingly fragile even as some practical changes in strategies and protocols in the camps and settlements where IDPs and refugees have fled for safety and assistance take form.

This year the Grand Bargain on refugees seems increasingly fragile.

Speaking at a side event in New York as world leaders gathered nearby for the U.N. General Assembly on Sept. 21, Bill O’Keefe, vice president for government relations and advocacy at Catholic Relief Services, insisted that C.R.S. and other refugee advocates were making adjustments to the new reality in Washington. “We will be doing a huge amount of engagement in response to the change of tone and policy” in Washington, he said. The refugee reassessment panel was sponsored by Caritas Internationalis, the church’s umbrella agency for international relief and development work, and its U.S. member Catholic Relief Services.

According to Mr. O’Keefe, the acute need for a more aggressive engagement with the public had accelerated an effort among humanitarian relief agencies across the board to better coordinate their outreach and advocacy. In the Catholic relief and development world, that public relations and spiritual offensive will begin on Sept. 27, when Caritas Internationalis launches its “Share the Journey” Migration Campaign, an effort to raise awareness and change the prevailing narrative on refugees.

Mr. O’Keefe wants to get the message out that “refugees are not the problem. The people they are running away from are the problem.” He says the United States and other world powers “have a responsibility to respond” when lives are at risk because of conflict or other crises that force migration. Mr. O’Keefe is confident that renewed outreach would be quickly rewarded by a return to a “more welcoming attitude” toward refugees.

He will have his work cut out for him. President Trump has made containing migration, whether from the Middle East or Central America, the centerpiece of his policy agenda.

In 2016 the United States accepted 85,000 refugees, and former President Barack Obama had hoped that number would rise to 110,000 in 2017, but President Trump reduced the annual quota for refugee resettlement in the United States to 50,000. He is expected to seek further reductions in the refugee quota for the next fiscal year—to about 40,000 in 2018.

These are incredibly small numbers when the enormity of the global refugee crisis is understood. In 2016 there were 17.2 million refugees—7 percent more than in 2015, according to the the office of the U.N. High Commissioner for Refugees. Turkey, for the third straight year, hosted the most refugees, at 2.9 million, followed by Pakistan with 1.4 million and Lebanon with 1 million. Turkey and Germany were the only Group of 20 nations among the top 10 host countries. Germany hosted 670,000 refugees.

A co-panelist with Mr. O’Keefe, Brooke Lauten from the Norwegian Refugee Council, suggests that the growing resistance to “secondary movement”—that is, of refugees from a initial host state to a permanent resettlement state—“is fundamentally an obstacle to the responsibility sharing” envisioned by the Grand Bargain.

More than 14.5 million refugees—84 percent of the world’s total—are hosted in often precarious conditions in developing nations, the states often least able to shoulder to the burden. In Kenya, more 450,000 Somali and Sudanese refugees live in vast camps, some since 1991.

When returning home is no longer a safe option, refugees may wait years before they can be resettled or integrated into their host nations, partly because of resistance to third-party resettlement in Europe and the United States. Children are growing up in camps and because of their status are often cut off from normal educational opportunities in host states. Refugee children are five times more likely to be out of school than non-refugee children, according to the United Nations.

That gap has been a special interest of the Jesuit Refugee Service. Joining Mr. O’Keefe on the Caritas panel was Giulia McPherson, J.R.S. director of advocacy and operations. In keeping with the Jesuits’ historic interest in education, J.R.S. has been on a mission to restore educational access to refugee children all over the world.

It is of course an expectation that food, water and shelter will be among the first assistance delivered to people who become refugees; Ms. McPherson argues that education should likewise be considered an essential service. Noting that globally only 2 percent of humanitarian funding goes to education, she says, “Education cannot wait.” In the sometimes chaotic environment of a refugee camp, she says, “getting kids back into class with their peers, bringing some sense of normalcy back into their lives, is critical.”

And because of the uncertain timeframe of a final resettlement, “being back in school as quickly as possible has significant benefits for their families and for their communities.”

Whether they will be finding a way to build a new life (integrating into their host societies or resettling in a third-party state) or returning home, where they will have to rebuild their societies, education is a “life-saving intervention” for refugee children, Ms. McPherson argues.

Advocates and relief workers say their focus on improving educational access and other aspects of the 2016 Grand Bargain—reforming fundraising and information sharing, seeking improved social integration for refugees in hosting societies and equalizing burden-sharing—will continue this year even as the global refugee crisis shows no sign of abating. Keenly on the minds of the experts gathered by Caritas was an entirely new challenge last week as some 420,000 Rohingya Muslims fled over the border from Myanmar into Bangladesh to escape an apparent campaign of ethnic cleansing.