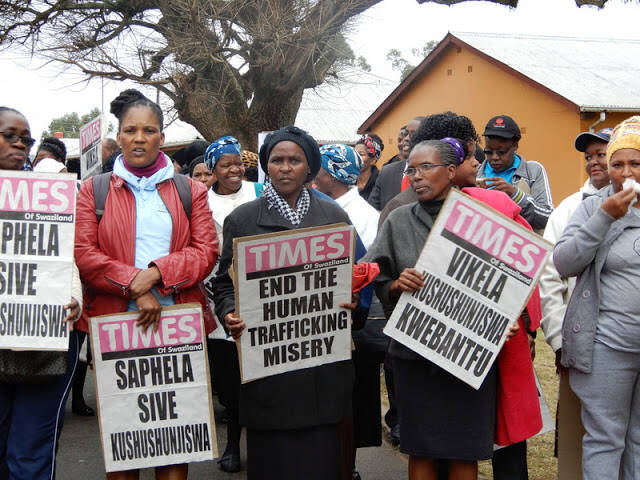 Government officials joined Catholics and other citizens from across the country at a march against human trafficking on Aug. 26. (photo by Bishop José Luis Ponce de Leon)

The Catholic Church in the small African nation of Swaziland has taken a lead role in southern Africa in raising awareness on two important justice issues: gender-based violence and human trafficking. For the second time in two months the church has helped coordinate nationwide awareness marches, and the country’s police commissioner, Isaac Magagula, has publicly thanked the church for its efforts in what he calls “the fight against crime.” Most Swazi adhere to Christianity, but only about 20 percent of the population is Roman Catholic.

On July 1, the Justice and Peace Commission of the nation’s only diocese, in Manzini, organized a march against gender-based violence. Speaking at the march, the interim mayor of the town of Hlatikulu, Maduduza Zwane, described gender-based violence as “one of the most pervasive violations of human rights in the world, one of the least prosecuted crimes, and one of the greatest threats to lasting peace and development in Swaziland and the entire world.”

High rates of gender-based violence plague the small monarchical kingdom, as well as neighboring South Africa. It is, for the most part, an unreported crime. The South African deputy minister of education, for example, was forced to quit his job in August after he was accused of beating a woman in a nightclub in Johannesburg. He has been charged with assault.

Swaziland’s police commissioner told the marchers on July 1 that it was “encouraging that the Catholic Church has seen it fit to lead this kind of campaign so that we may together fight the scourge with all the weapons at our dispose. It is also pleasing to know that this is not going to be the first and the last of these initiatives. I am told similar campaigns will be staged across the country. That is applaudable. If we had partners like the church, partnering with us, talking with one voice with us that gender violence is not the answer...we will win this war.”

The country's police commissioner said that with "partners like the church...we will win this war."

And on Aug. 26, the diocesan bishop, José Luis Ponce de Leon (an Argentinian Consolata missionary), led Catholics from across the country as they marched against human-trafficking. The bishop had been approached by members of the St. Anne’s Sodality—sodalities like Anne’s and the Sacred Heart are very influential in the southern African church—who wanted to organize a march. He suggested that it be made into a diocesan event so that the church could offer support to the Swazi government’s ongoing efforts to fight the crime. Bishop Ponce de Leon released a statement saying, “Through Caritas Swaziland, our diocese has always been interested in partnering with government and other forces in the country against the trafficking of persons. Together, with the dimensions of awareness and prayer, we would like to be of help to those who have been victims of this crime.” The Justice and Peace Commission of the diocese also supported the march.

People from all walks of life—government, army, police and different churches —came together in an act of solidarity with victims of this crime. In his address, Bishop Ponce de Leon referred to the parable of the good Samaritan but said victims of trafficking are “invisible”: “We all talk about it. We all read and hear about it in our media, but no one sees it and therefore the victims risk not having any good Samaritan.”

Bishop Ponce de Leon said that the church’s response was made up of four P’s: prevention, protection, partnership and prayer. He stressed the need for partnership with the government, saying, “A crime against humanity demands humanity to come together to stop it.”

Mr. Magagula, the commissioner of police, also addressed the gathering, saying, “Human trafficking...involves making false promises to a gullible person, in particular promises of employment and a better life,” but victims end up in “forced labor or used as sex slaves.” He said that since 2010 there have been 115 confirmed victims of human trafficking funneled through the small country. “Swaziland is a source, destination and a transit point,” the commissioner added.

The U.S. ambassador to Swaziland, Lisa Peterson, said that the United States has partnered with the Swazi government, especially in law enforcement, to fight trafficking. “While the government cannot undo the pain and indignity victims face, they can seek to right the wrong by prosecuting, convicting and sentencing traffickers and those complicit in trafficking,” Ms. Peterson said.

“A crime against humanity demands humanity to come together to stop it.”

The relatively small Catholic community in Swaziland is at the forefront of several social issues. Swaziland, for example, is critically affected by H.I.V./AIDS and has the highest infection rate in the world—25.8 percent of all adults are reported to be H.I.V.-positive. Because the health care system is centralized in cities where only 20 percent of the country’s population resides, the church often provides care for those who do not have easy access to it.

The Catholic Church in Swaziland is raising social awareness around many issues that are regional and global concerns. Manzini is one of the few dioceses in southern Africa that is implementing Pope Francis’ ecclesial vision articulated in “Evangelii Gaudium.” Hopefully they will encourage their neighbors to do the same.